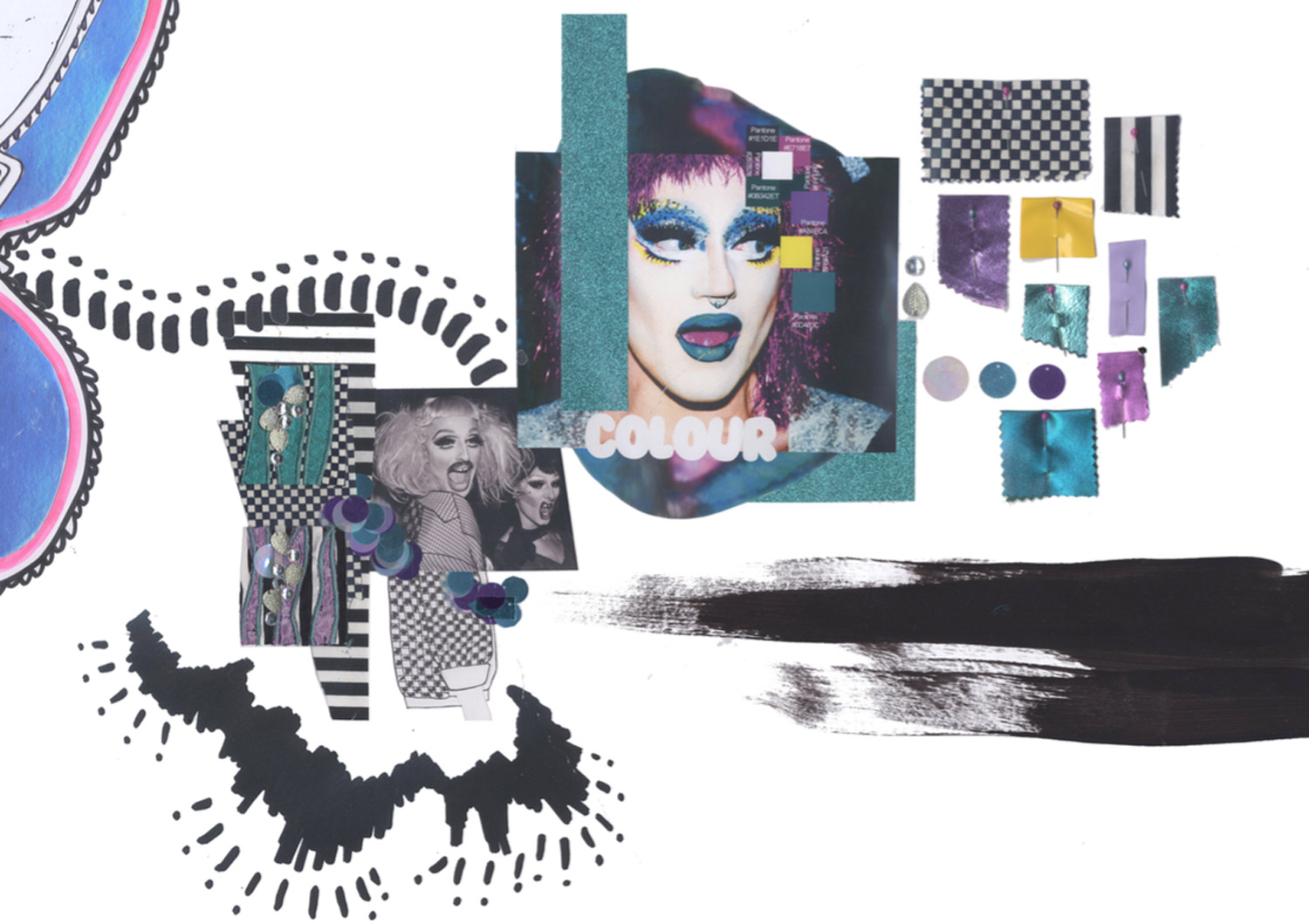 Alice Callum’s graduate collection, ‘BLOSSOM AFTER MIDNIGHT’, explores the concept of how the body can become an artistic medium through the essence of performance both on stage and in the street. For years the body has been used as a medium to translate the essence of art through performance. Focusing primarily on 20th century performance, she explored a variety of performances from the Ballet Russes and the works of Leon Bakst to Marchesa Casati to late 20th Century performers such as Leigh Bowery, Bowie, Lindsay Kemp and the rise of club and drag cultures.

The act of dressing up, using your body to present an idea, persona or simply your own extravagance is the primary drive of her inspiration. She presents the beauty of the outlandish and surpass the bodily limitations of the everyday through the use of clothing. Alice has used the method of appliqué, renovating this traditional technique to create bold and performative pieces for the everyday ‘weirdo’. She wanted to explore how the body can become the medium of art within the performance that is everyday life. 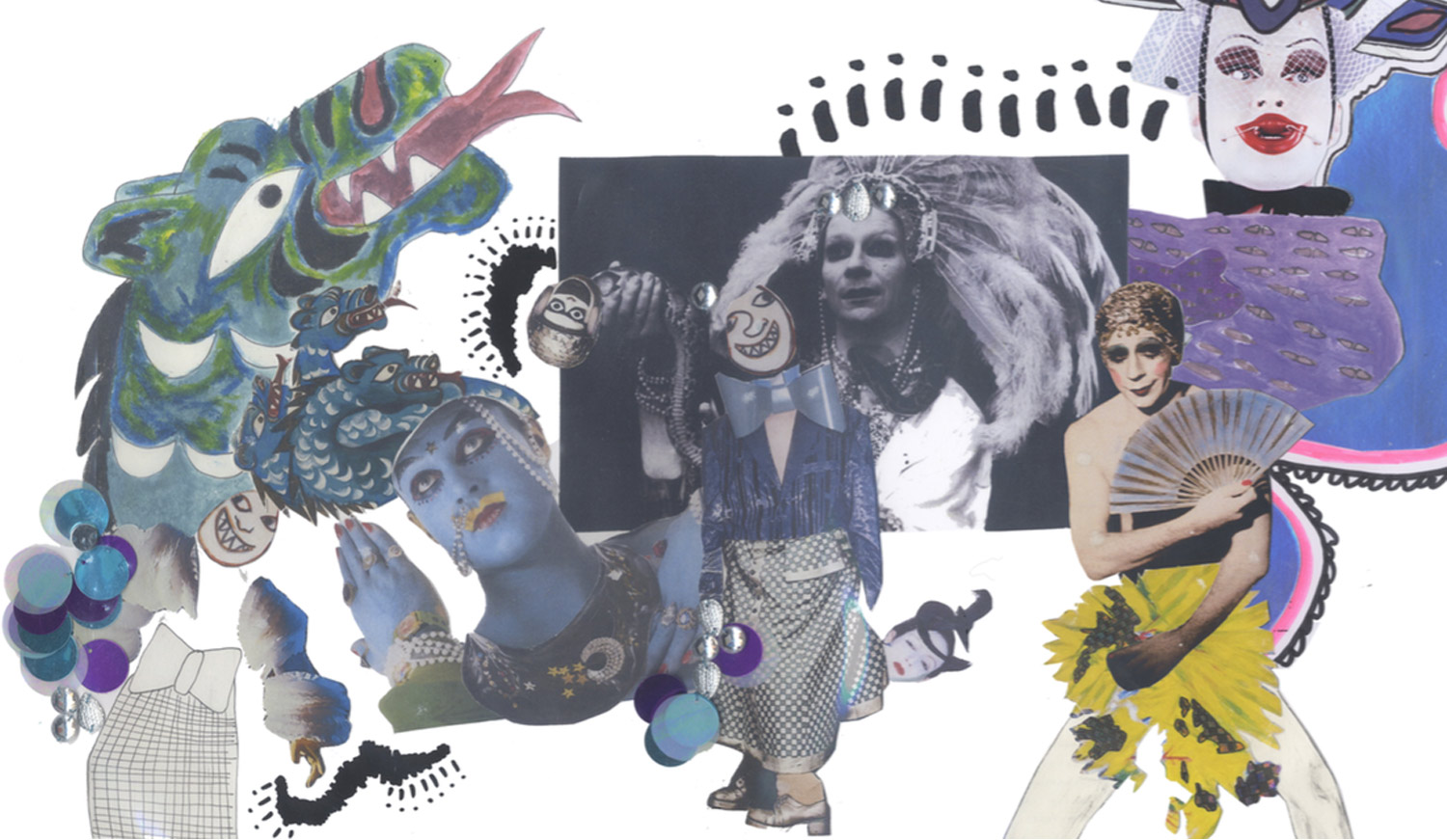 Just like Marchesa Casati, Bowery and Bowie used the essence of dress up to turn their lives into a spectacle, to adopt the persona within the performance, it became her aim to develop a fashion collection that holds these ideologies, a collection that would provide sparkles and performance in the wearers everyday life.

After researching into the variety of performances throughout the 20th Century, Alice began to experiment in textile samples. The Ballet Russes contains a range of textile techniques to create an eye catching and bold look when on stage. This spurred the initial idea for her to develop textile techniques. From there she continued to connect this with this with the essence of the 80’s club culture, bold patterns and prints mixed with the motif and imagery she had explored. 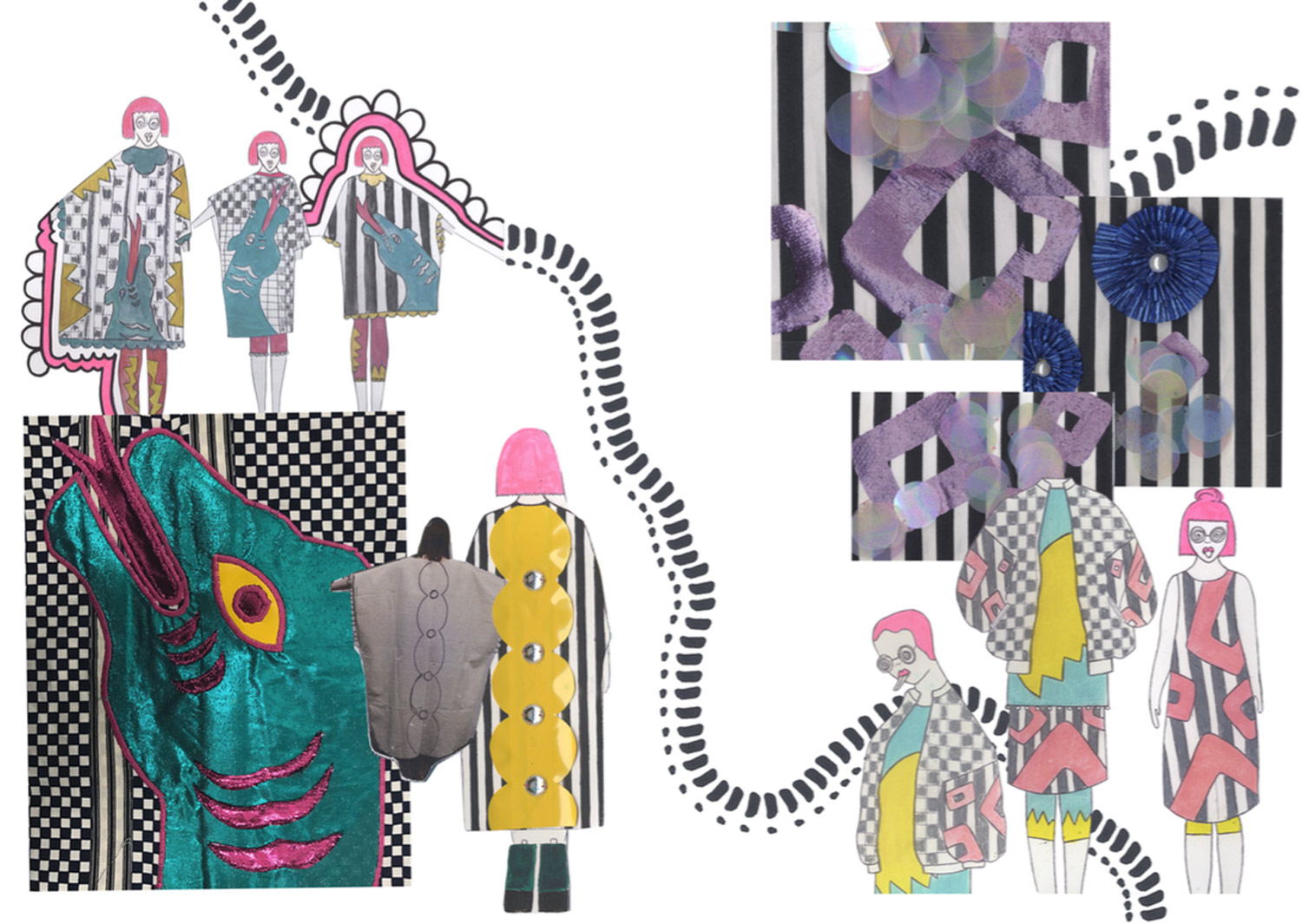 A process of appliqué was developed, using bondaweb to initially secure the fabrics and then using satin stitch on a domestic machine to secure the patterns. A variety of imagery explores how fabrics can be combined and layered to exert a theatrical theme. Mixing ordinary fabrics such as cottons with metallic lycras and lamés, intertwine the idea of the everyday becoming a party of theatricality.

Combining this with heavy embellishing, surface pattern and street style silhouettes, allows the essence of garish behaviour and performance to be noted through the bold surface embellishment and textiles. ‘BLOSSOM AFTER MIDNIGHT’ allows whatever creature who relishes in extravagance, to embrace their performance and their life as the stage. Alice’s clothes are for people who enjoy the beauty and detail in hand crafted fashion, who will wear pieces till the threads tear rather than hang them, preserved in their wardrobe. 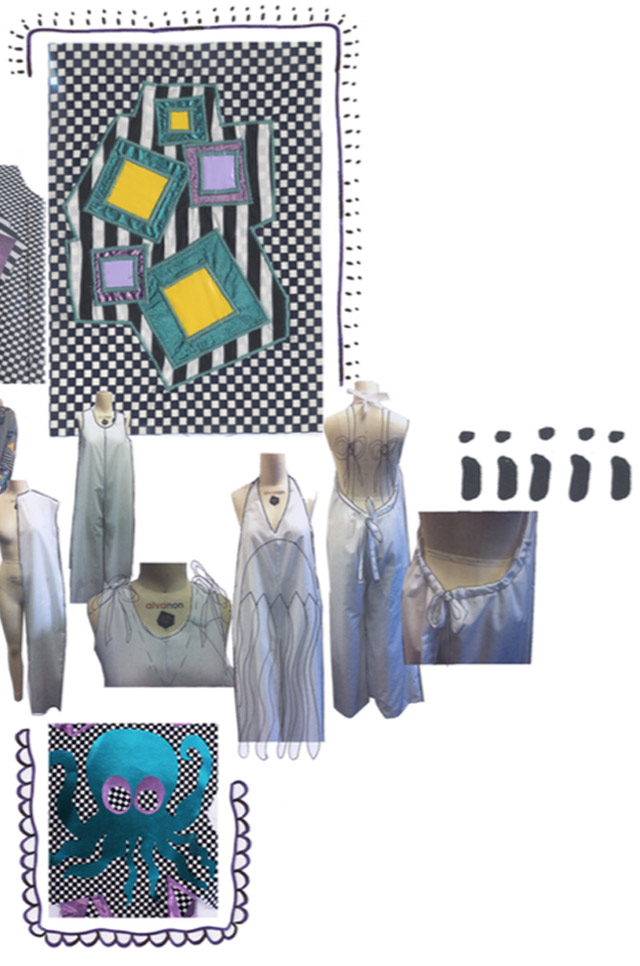 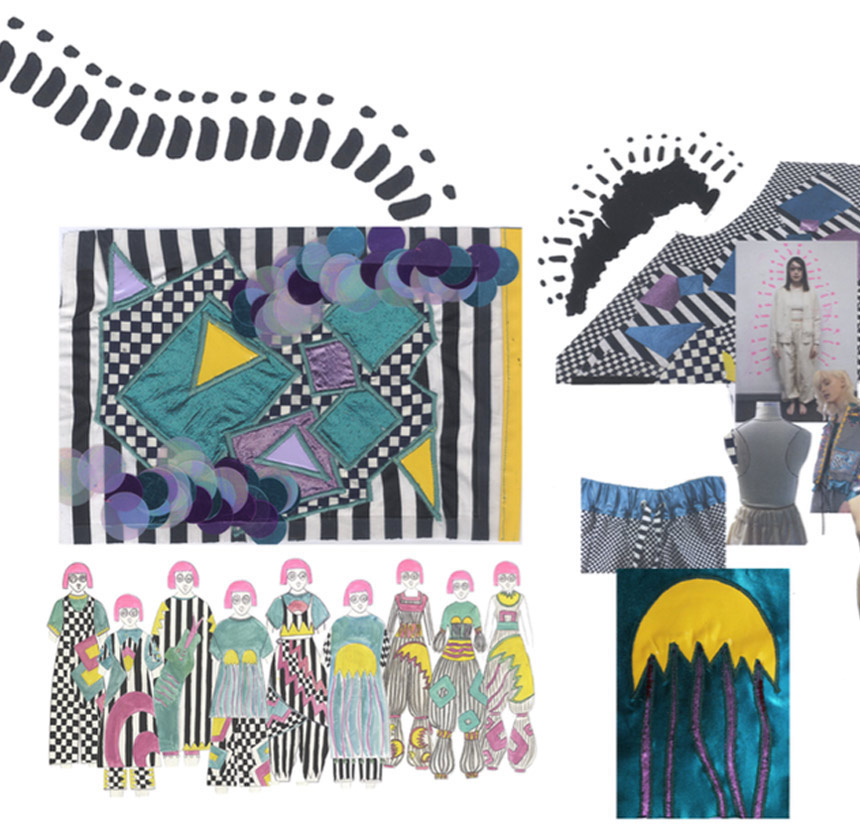 Furthermore, the motion of the human body plays a major role within performance, whether this be dancing and acting or simply walking down the street. Our actions and movements are essential in the theatre of life. Therefore, the combination of drawing inspiration from both the loose silhouettes of Bakst, to the shimmering and bold fabrics used by Leigh Bowery entice the audience and heighten the performance. Mixing the loose silhouettes which allow movement with the built up fabrics, motifs and hand embellishment allows the collection to encompass the soul of theatre and performance. 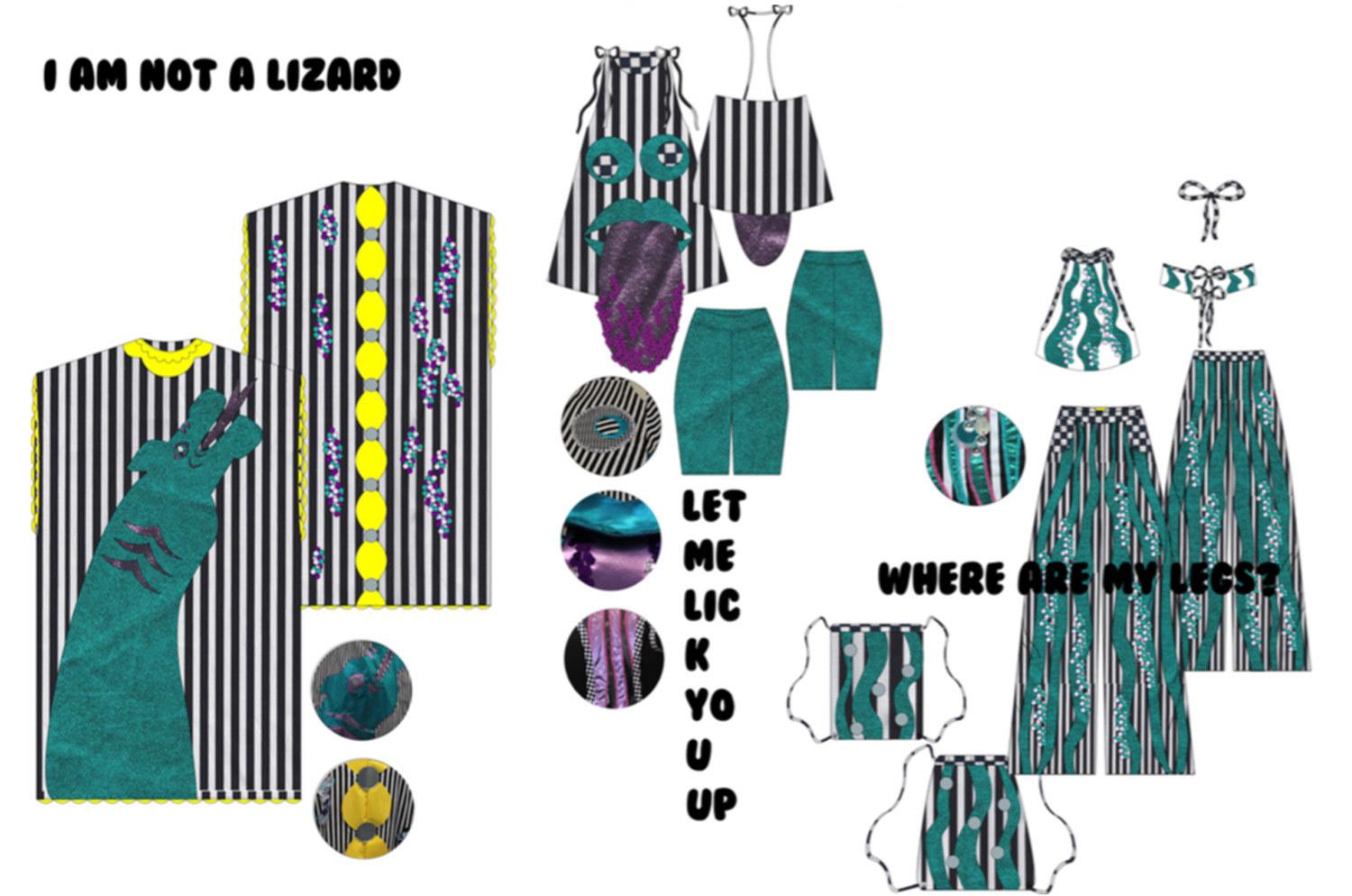 The presence of the everyday is highlighted within the silhouette development. Loose trousers, baggy dresses, bombers and tracksuits, encase the essence of street wear, clothing for the everyday person. When integrated with the detail of applique and clusters of sequins, the concept of transforming the body as the medium of performance within the everyday is achieved. Drawing from the extravagance of theatre, bold fabrics, motifs and the layering of textures combined with the street wear silhouettes offers the wearer the opportunity to embrace their life as their stage. 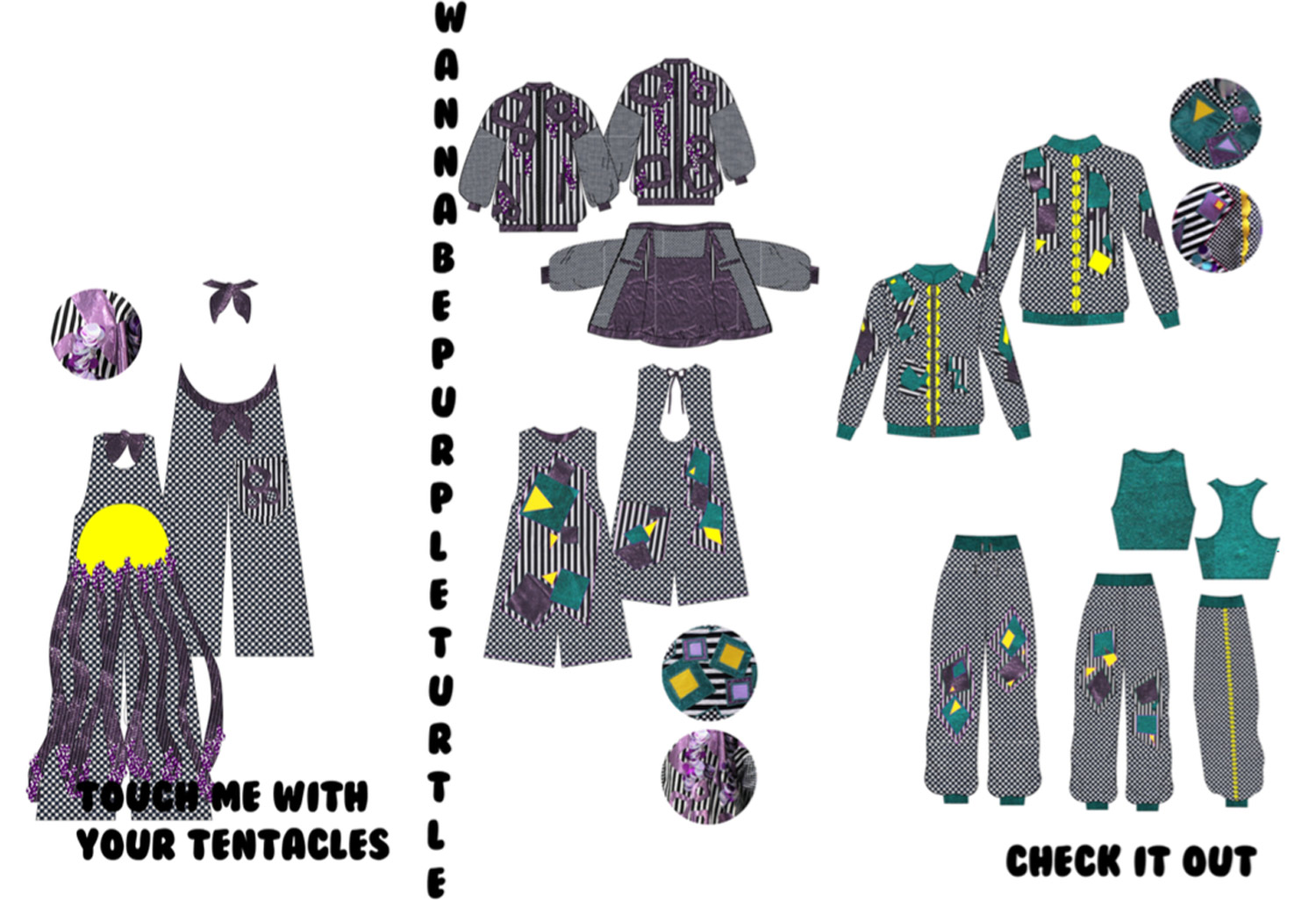 An exploration of the 3D was also incorporated bringing the motifs from flat imagery to an interactive level. Jellyfish tentacles and a 3D tongue allow the garments to come to life. The idea of bringing the theatre into the everyday is excelled within this use of 3D. Theatres have continuously used props and extravagant costumes to elevate the performance level and therefore injecting this into her collection through 3D elements exploits this concept.