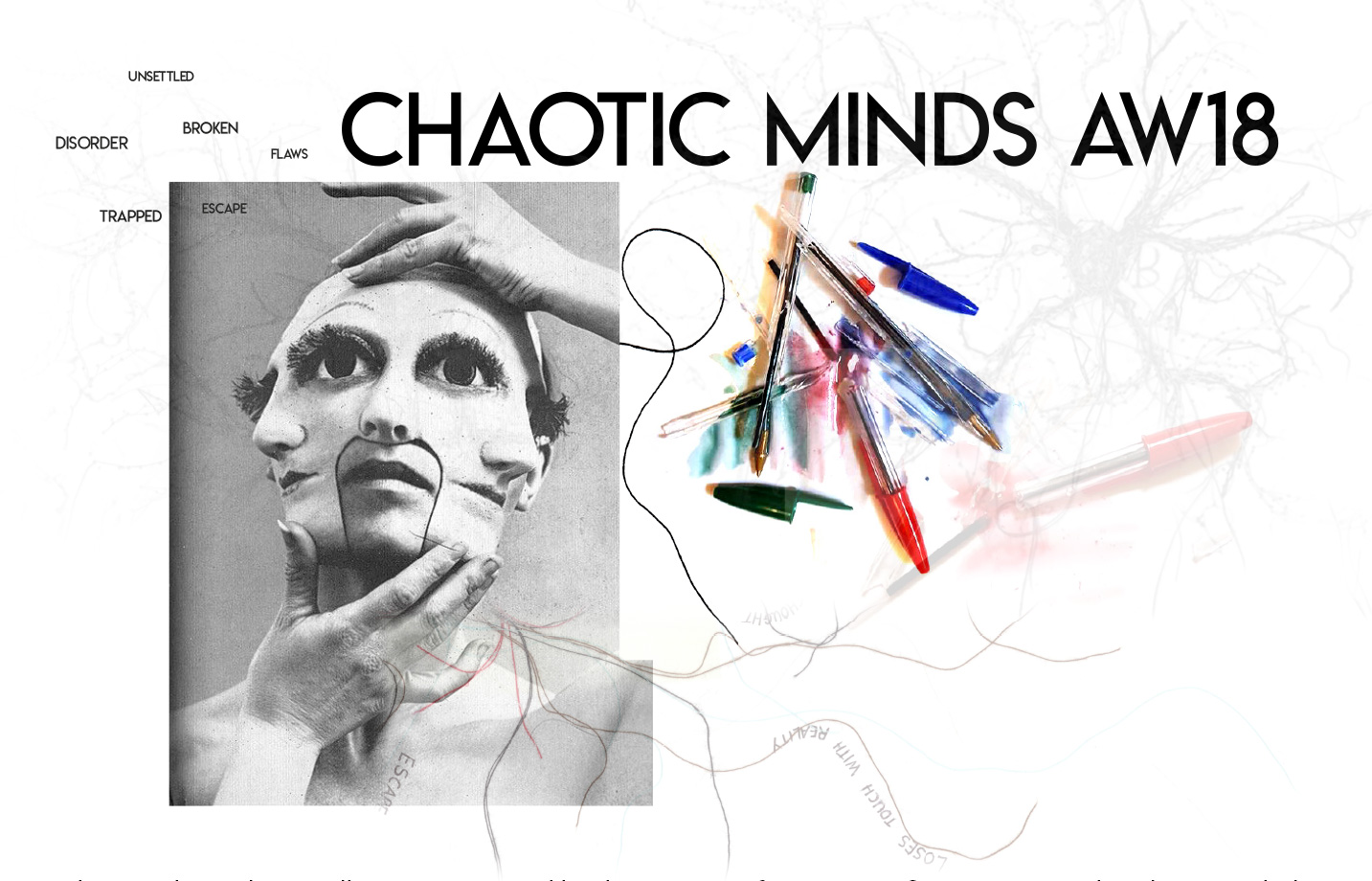 Ben Stephen Ford’s graduate collection is inspired by the concept of wanting to ‘fix it’ or ‘put it right’, playing with the impulse of those who can’t stop that internal need for perfection. The idea can be best described as a crooked hanging frame, some would see the fault from a distance away, however some may just walk past it. It is those who have to fix the problem who are the ones that are being captured in the collection.

The muse, an image of a withering woman, her name Elisa Josolyne; researching her story and following her demise as she tries endlessly to reach impossible standards. Overworking and pressure is prevalent across many industries, but no more so than the creative sector. The demand to a achieves one’s goals can get so great that in the end there is no way to be fulfilled. 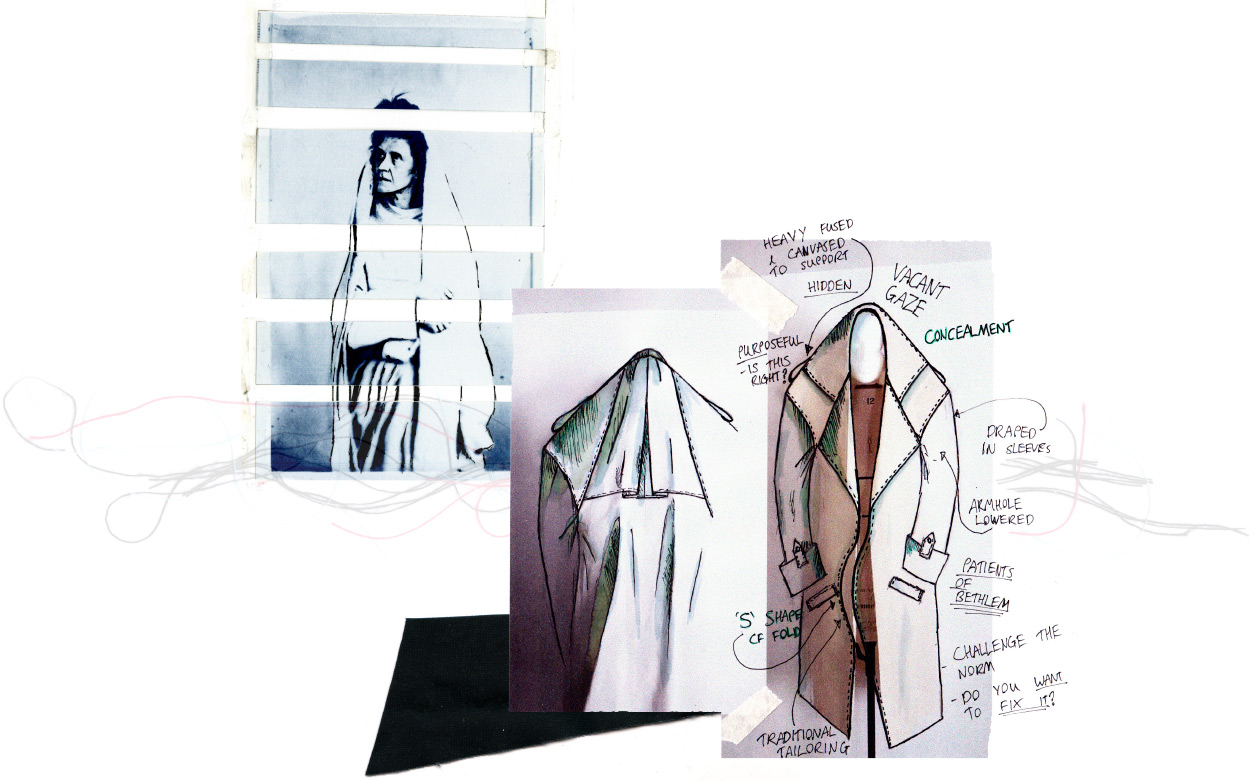 Perception is relative from person to person. Something that we may or may not see in things depending on how viewed. Obsessive compulsive disorder (OCD), creates the irrational need to repeat actions in order to proceed. Small tendencies grow rapidly, blinding the effected in every aspect of daily life. If not completed the person may feel uncomfortable or unsettled as if something bad was to happen. To them this is normal behaviour, but to others this is not the case. 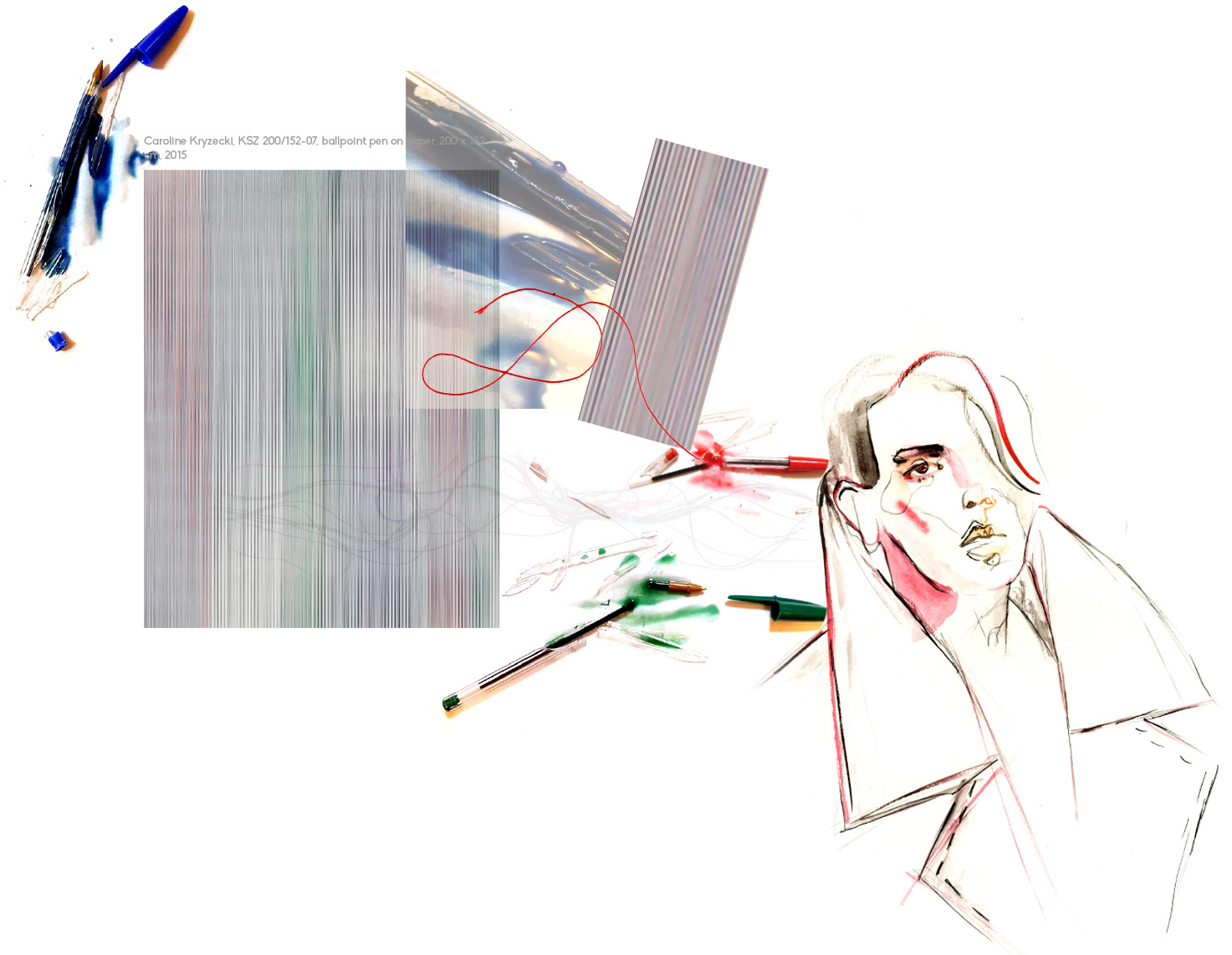 The colour scheme derives from biros, black, blue, green and red. The artist Caroline Kryzecki creates art only using these pens and a ruler, each line a few mm apart, giving the illusion from afar that the piece is created by large paint strokes. The precision and perfection needed in each pen stoke is intense If one angle is wrong, or one line too far apart then the piece would be ruined, the fault obvious for all to see. 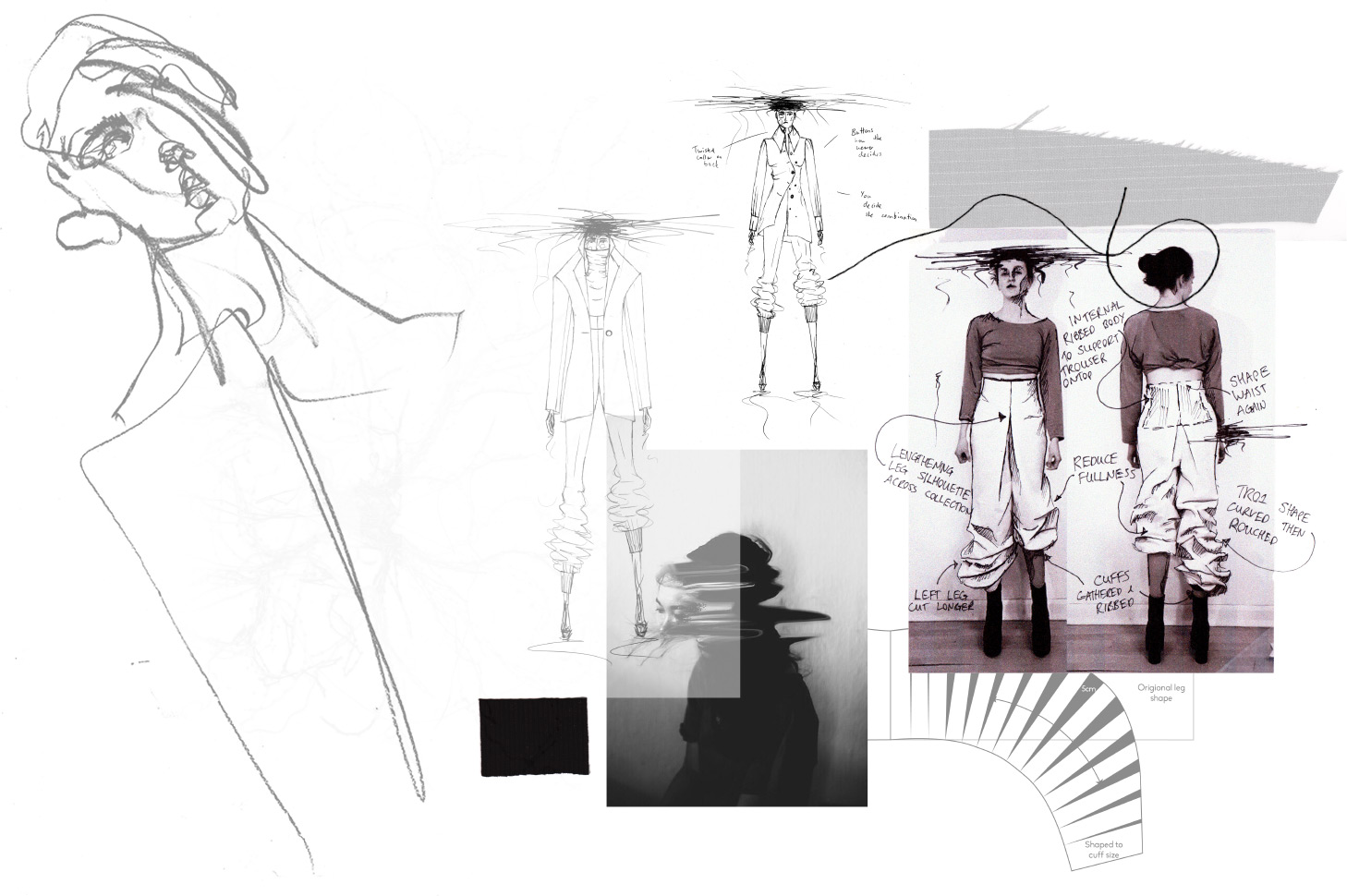 Three dimensionally working, creative pattern cutting is about trial and error. Giving you much more scope as a designer to create and realise what is possible. In contrary to 2D designing modelling on the stand allows visual and instant development as the process it undertaken, something as a designer I find to be inspiring. 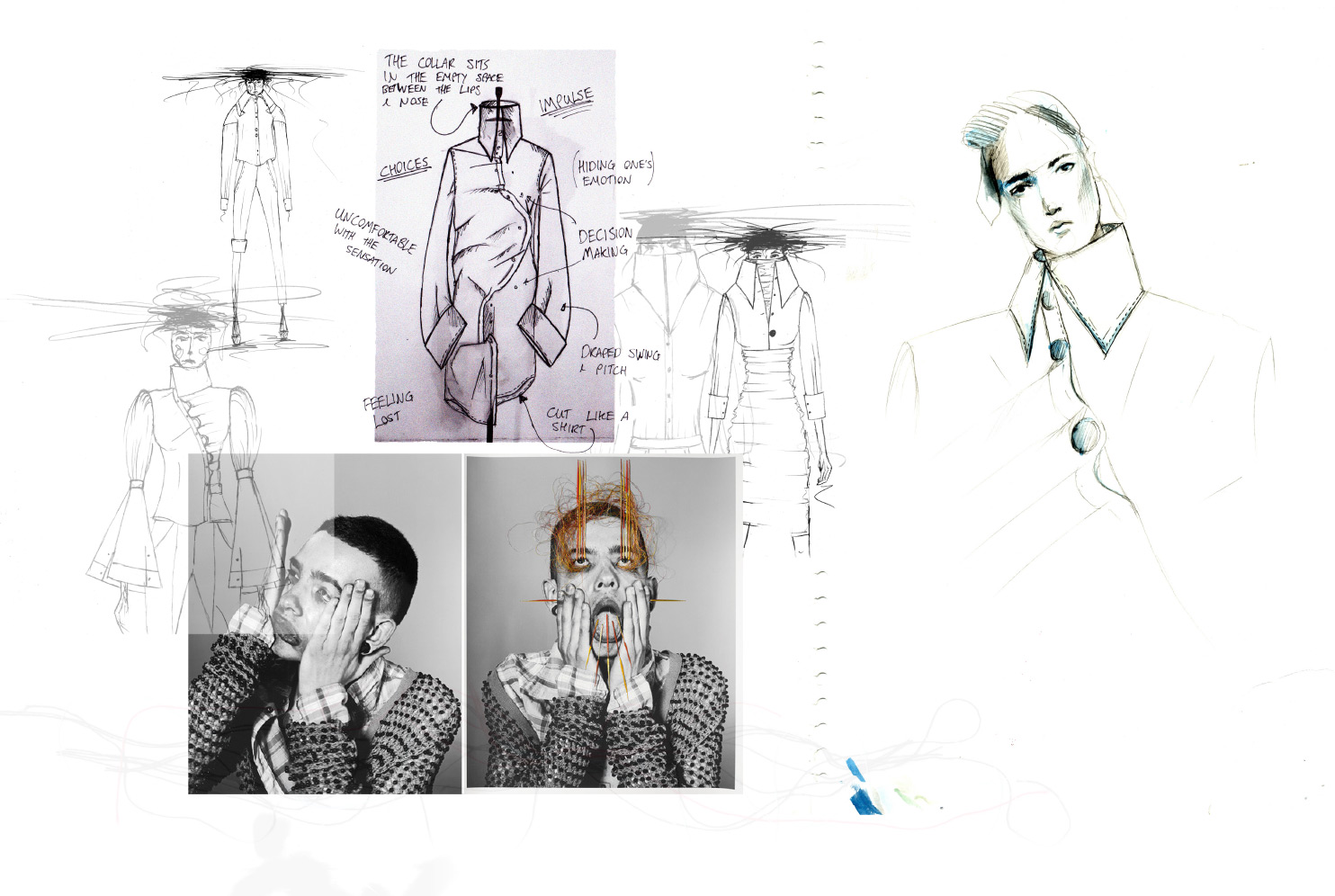 The mentality of the ‘perfectionist’, looking for fault where others may not see it, is the construction method. Using a combination of structure and drape, mixed weight materials and inspired pattern cutting techniques. The collection tells the story of this struggle, something which I resonate in personally. The struggle for perfection, to fix everything meticulously, the feeling of its ‘not quite right’ and letting go. 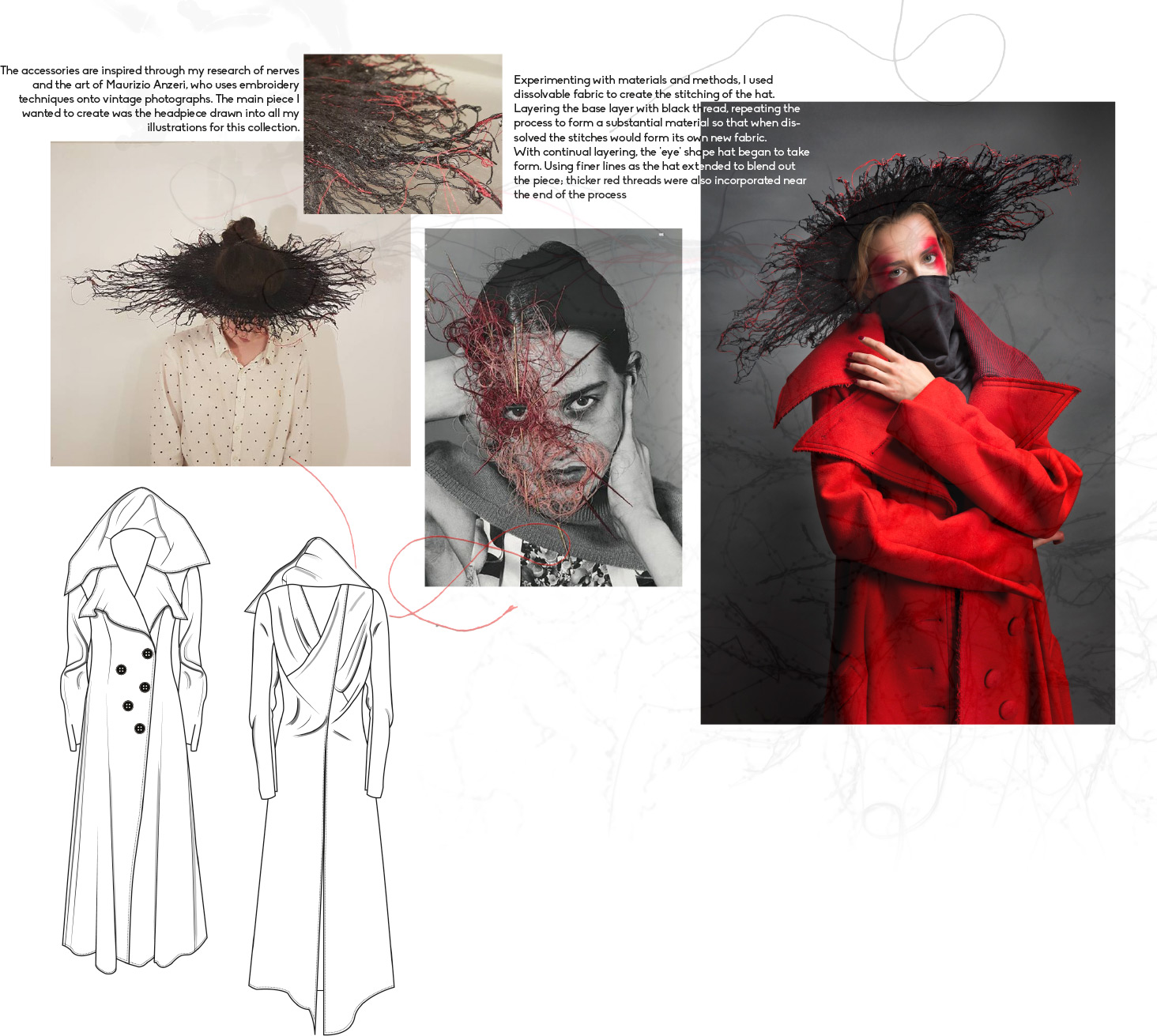 Picking at the tendencies of OCD, making the viewer want to ‘put it straight’ or ‘fix it’ playing with the torment of the those who have the impulse too. The clothes are troubled, never to be perfect. Things are twisted, placed wrong or just don’t match up as they should. The garments exposed as they contort, pull and expose. 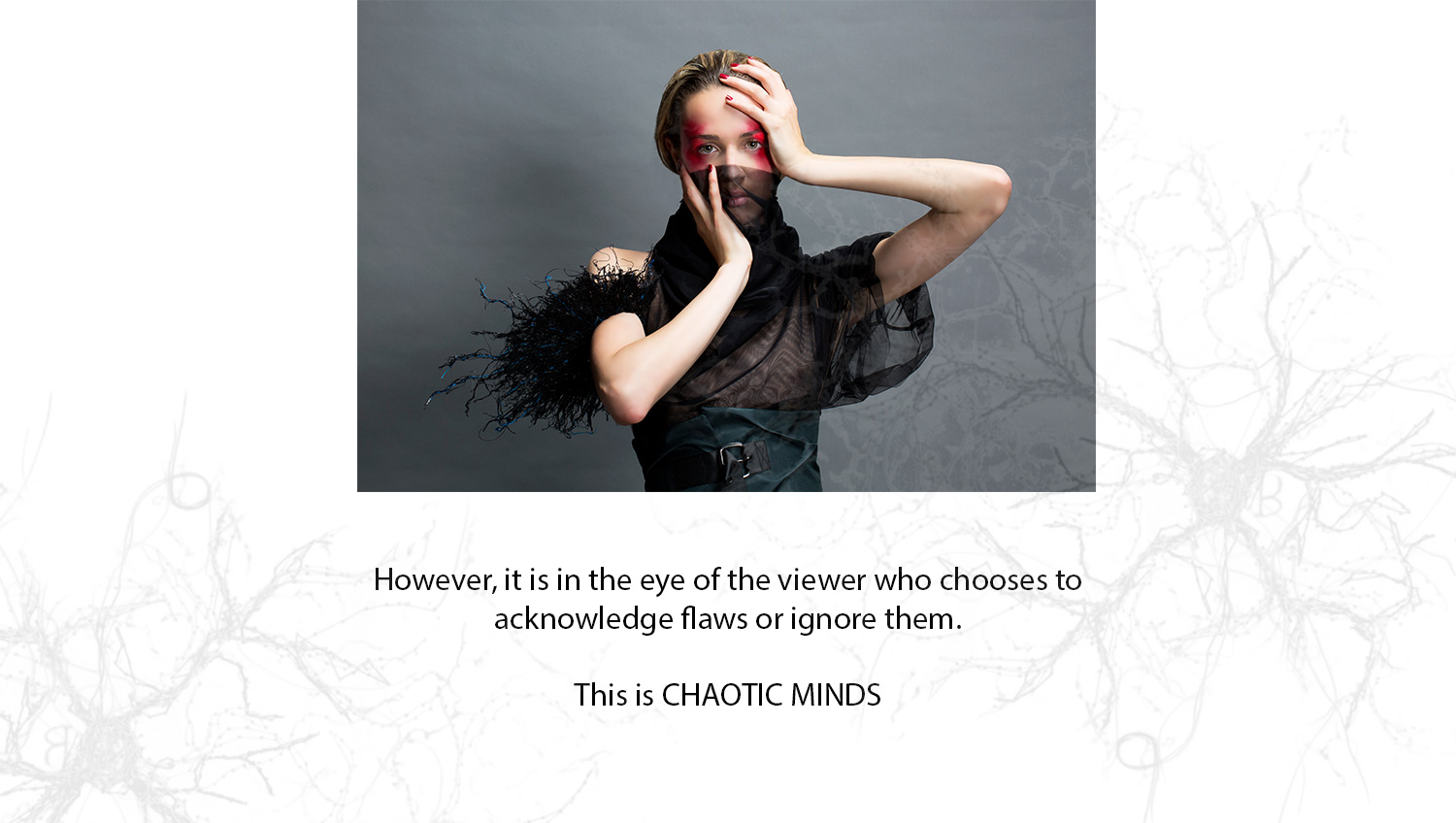