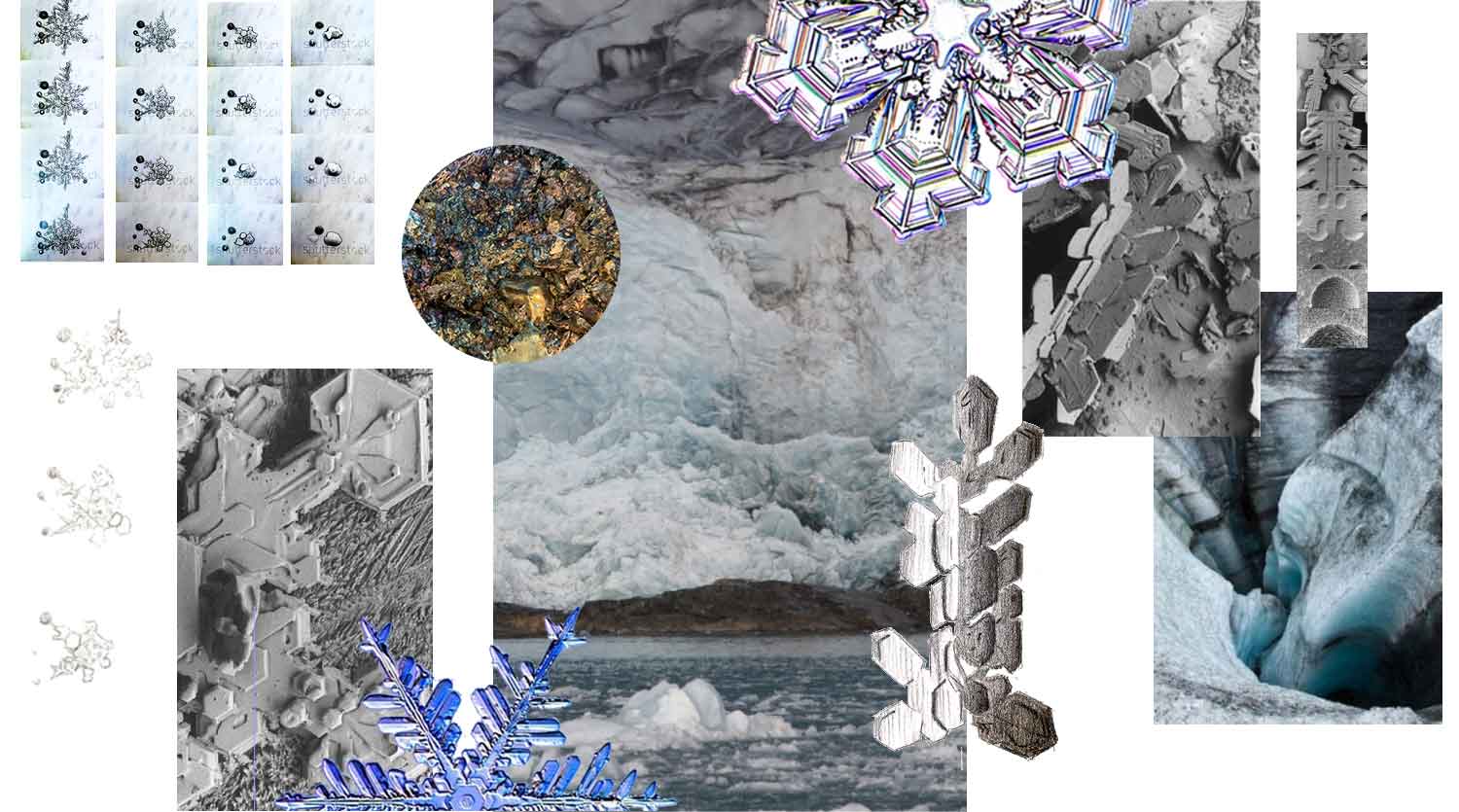 In summer 2019, Capucine went to Longyearbyen in Svalbard, the northernmost settlement of the planet, in the North Pole. Over there, she met and interviewed eminent scientists who took her on fieldwork to study the melting glaciers and who explained to her the issues of the ice melting in the Arctic. The devastating scale of change crystallised the issues for the project. Indeed, the most important thing she learnt was that to tackle climate change, everything relies on communication and science outreach. This is why she decided to design a collection which communicates about the melting glaciers in Svalbard: Wahlenbergbreen mementoes. In jewellery, memento mori used to be popular jewels worn to remind wearers that they were mortal and that everyone must eventually die. The jewels of this collection can be seen as reminders of the Arctic for the wearer and initiate a need to protect it. 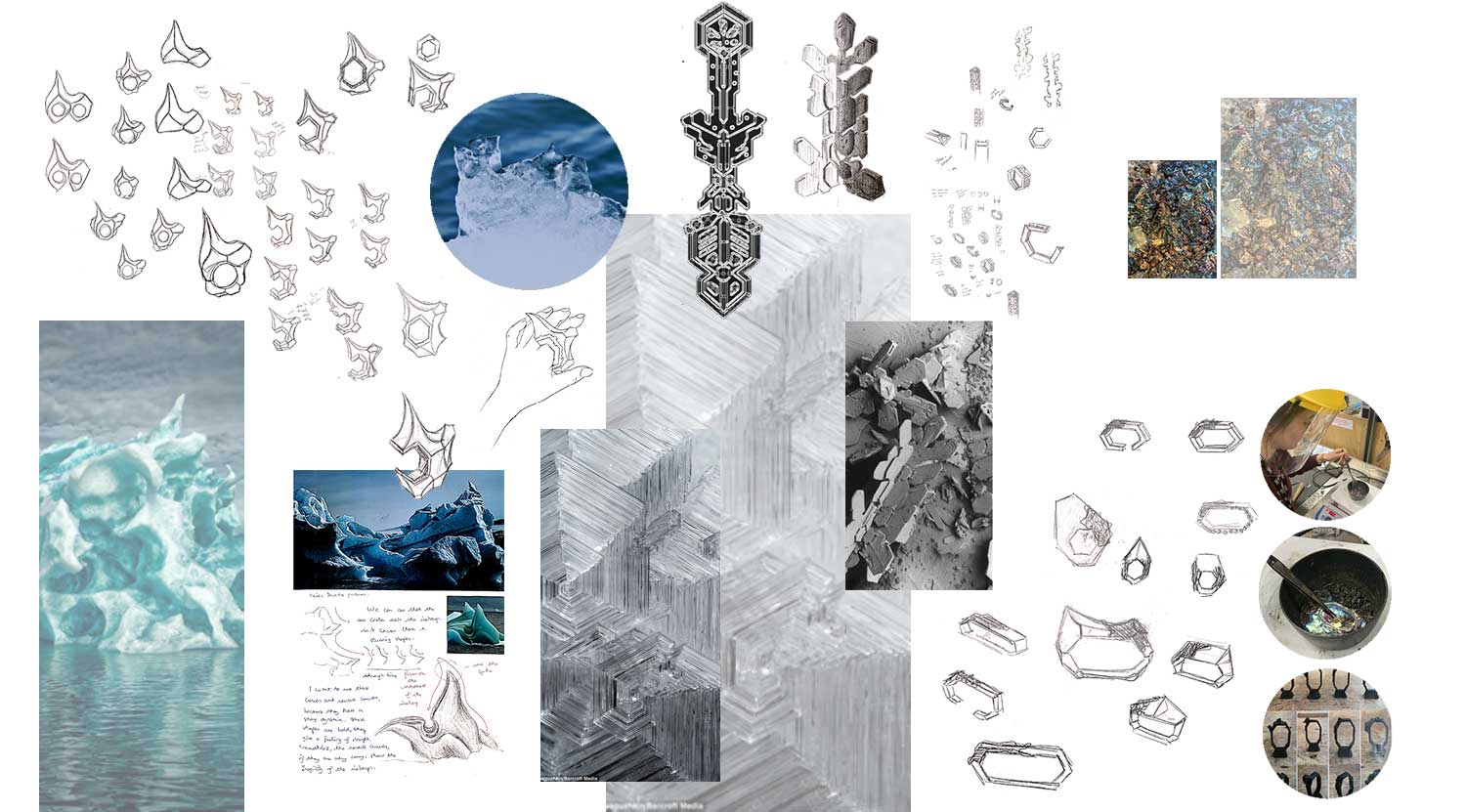 Each piece illustrates a particular issue of melting glaciers, whether it is cracks, erosion, or even decay. Capucine also found a deep interest in the microscopic world, thus she studied melting snow crystals with an electronic microscope, which gave her a new vocabulary of forms. The idea is to freeze in metal the ephemeral melting snow crystals, to make permanent what is being lost. The project is delivered through a wide range of modes of experimentation, production and technologies from historical to entirely contemporary. Indeed, she used CAD to create geometric rings with unusual snowflakes shapes, but also wax carving, and melting bismuth. Bismuth is a surprising metal which crystallized in geometrical shapes when it cools down after being melted. After many hours spent in the workshop, Capucine captured and froze the melting process of bismuth, which seems to consume some jewels. Besides, because the ice structure is hexagonal, she chose to have hexagonal rings ’structures. But in Svalbard she had the feeling the Arctic was broken, thus she broke the hexagons of her rings to illustrate this metaphor. To evoke the thousand and one aspects of the ice, different textures are used for the metal, which brings contrasts and strong character to the jewels.

Using recycled or sustainable materials was non-negotiable and part of the knowledge base and approach for the collection, all the pieces are made of 18k recycled gold or recycled silver. It is really important for her to have a responsible practice and to encourage people to have one. By her practice and narrative, Capucine wants her jewels to convey a deep message about the ice melting. Sentimental jewels have been worn for ages, it’s now time for sentimental jewels which refer to the environment. This collection is for the generation who cares about the planet’s future, and who is ready to communicate their values through their jewellery. They can wear the jewels to pay tribute and remind of Arctic, but also in the aim to spark interaction and a discussion with viewers about climate change. Capucine’s jewels are a mean of communication and expression, from her to her clients, and from her clients to their entourage. 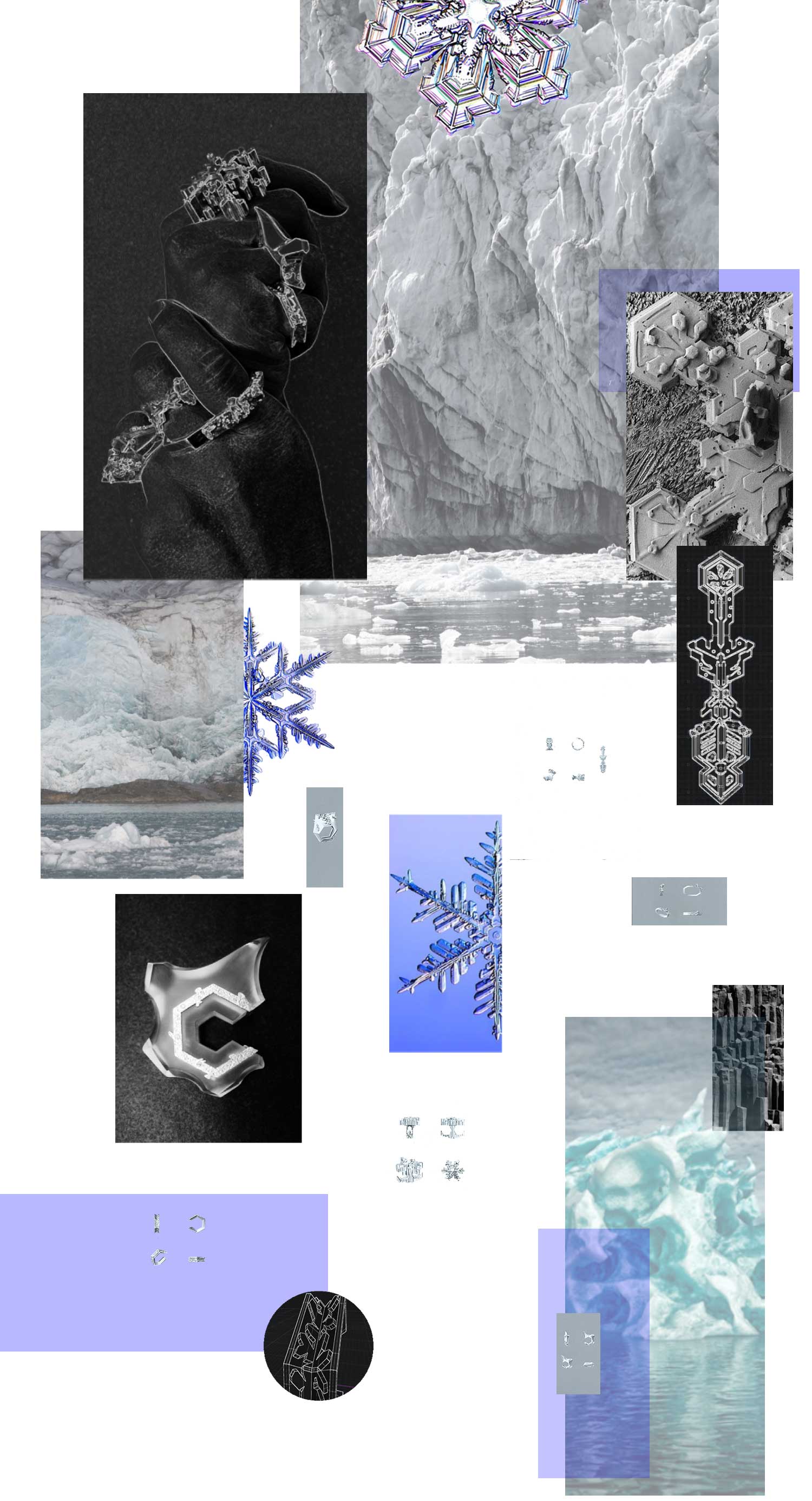