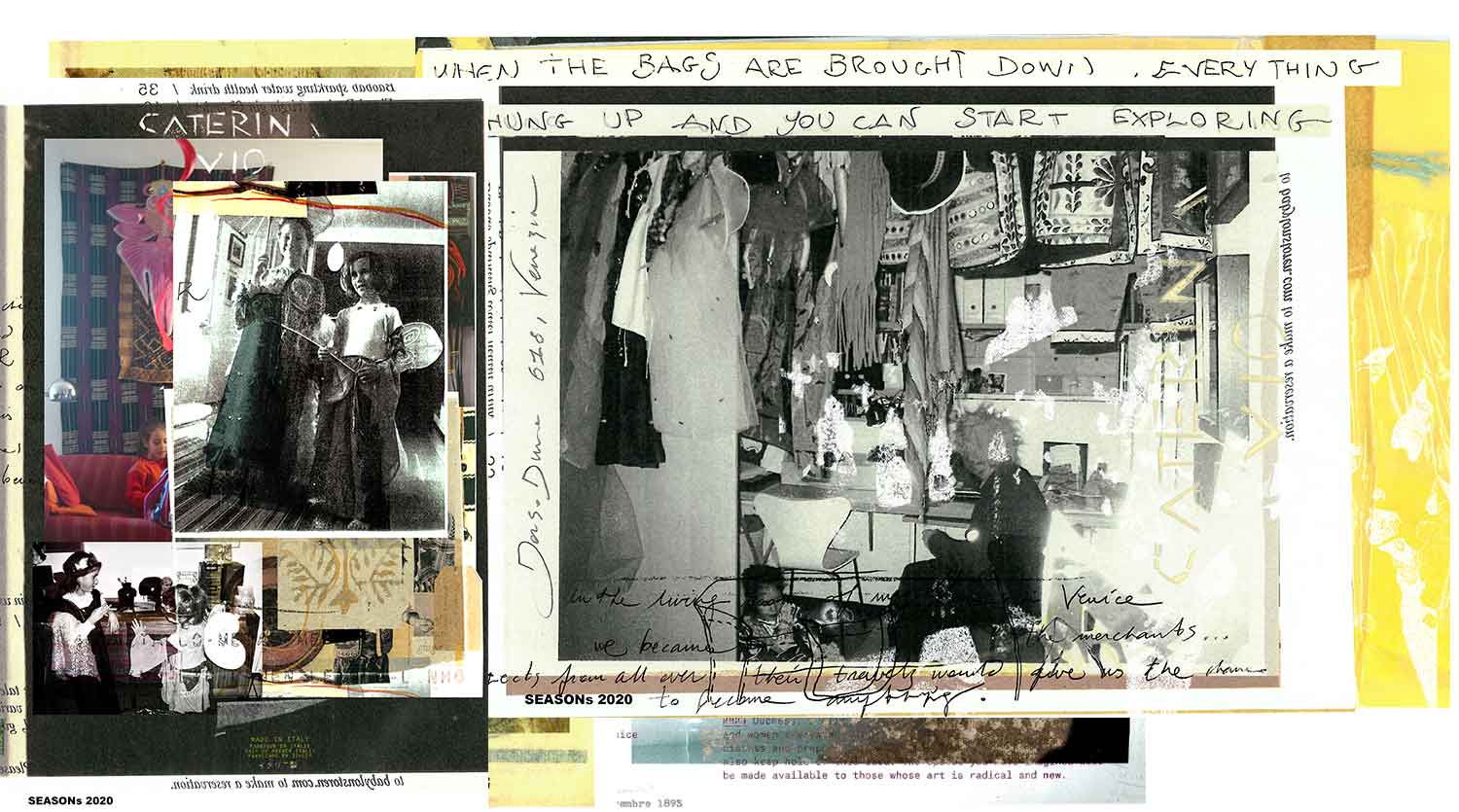 In response to encountering much disbelief when talking about her growing up in Venice, turning her normality into something considered as not existing, it was important for Caterina to celebrate the identity of a Venetian childhood, to give visibility to its inhabitants who are slowly being pushed out of the city by mass tourism-consumption. As children, her family would surround them with objects brought back from travels, allowing , through dressing up games, to explore different identities and ideas. As a main muse, during these games, the figure of the Venetian Merchant brought together different cultures, narratives, places, objects, practices, and created something new out of these elements without first destroying them, recreating “Venetian” ways of movement, exchange, fluidity and circularity. This way of thinking guided the initial draping, experimentation and collaging for the project and the research regarding fabrication and production. 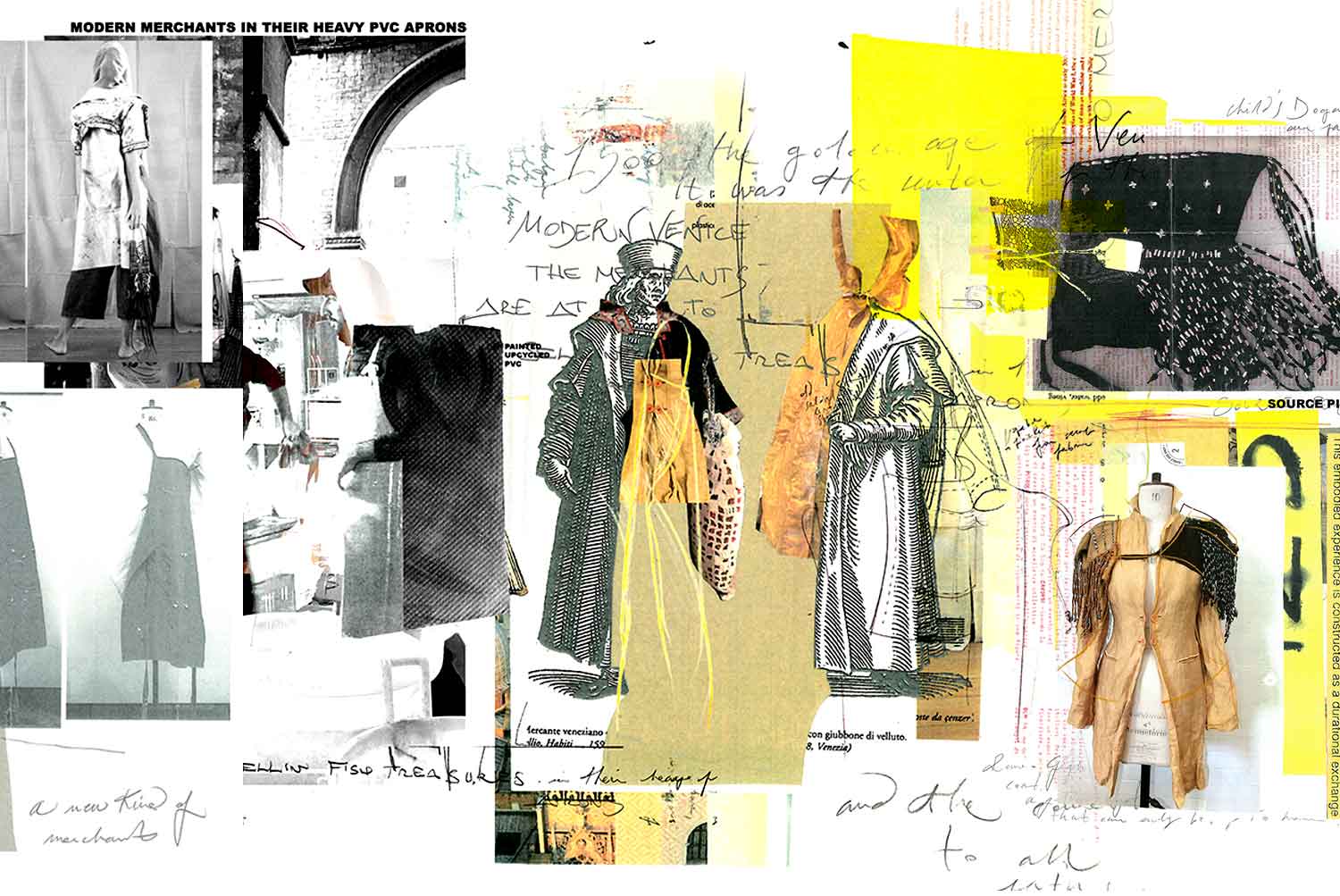 So who are the merchants of Venice today? They are in the markets selling fresh fish, and in the botteghe, selling breads, wines, and golden jewellery. They are all slowly disappearing, but the fishmongers, with their boots, buckets and aprons, cutting blocks and hanging hooks for keeping their stuff off the wet paving stones of the mercato del pesce, caught Caterina s attention.The tackle of these modern day merchants is a motif in this collection, especially juxtaposed to the luxurious crafts of the city often attributed to these venetian figures. 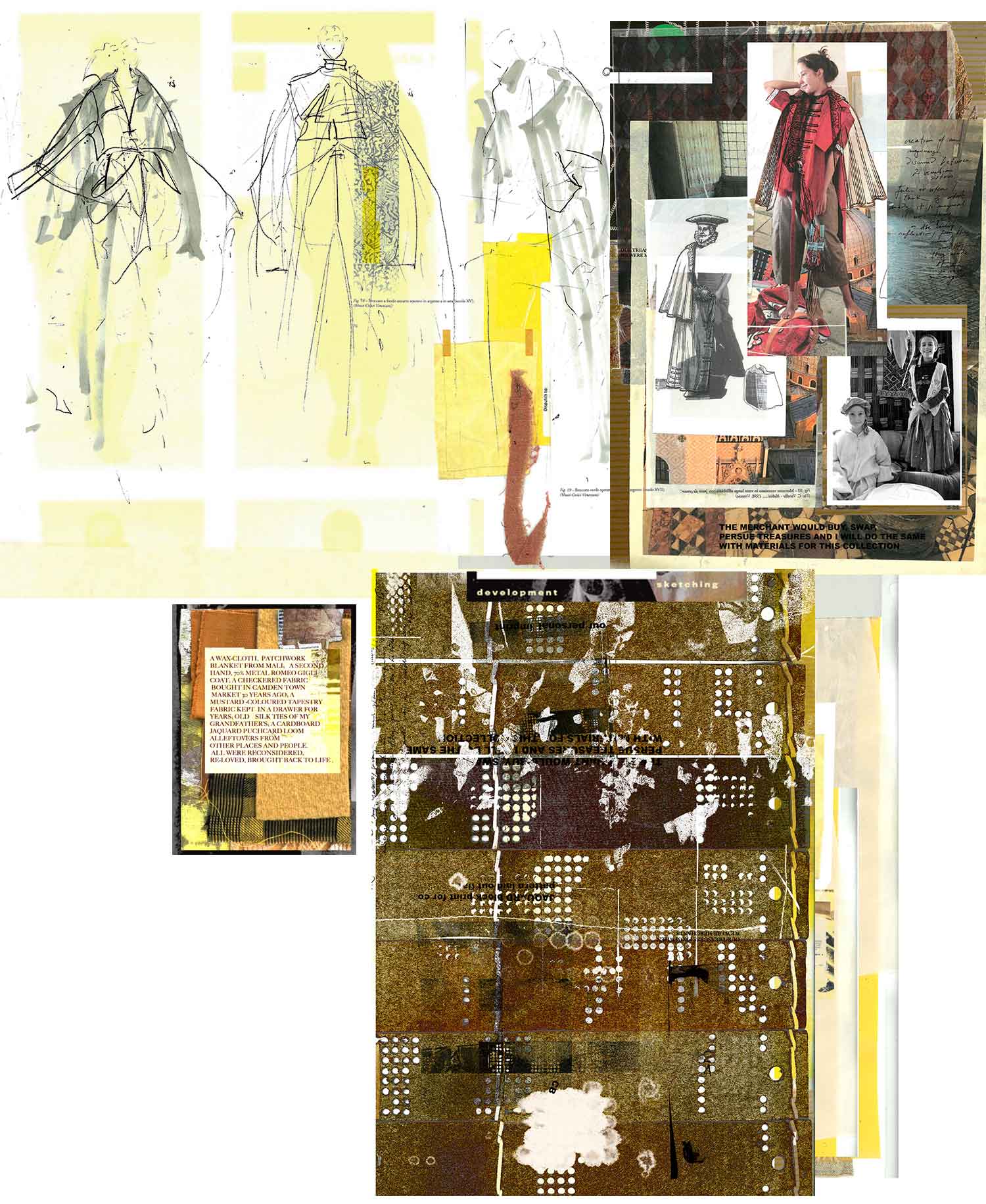 Visiting the modern merchants' spaces of Venice, where the fishmungers work, gave many ideas on what materials to upcycle for this collection. Reusing collected pvc for the merrchats aprons alongside organic cotton, linen and silk sourced locally. Most importantly many fabrics used in this project are remnants of Caterina’s childhood games and environment, giving each piece a story and rendering it unique. This meant that the design of details of the garments were very much led by the quantity and importance of these materials, closing and opening boudaries in the design process. 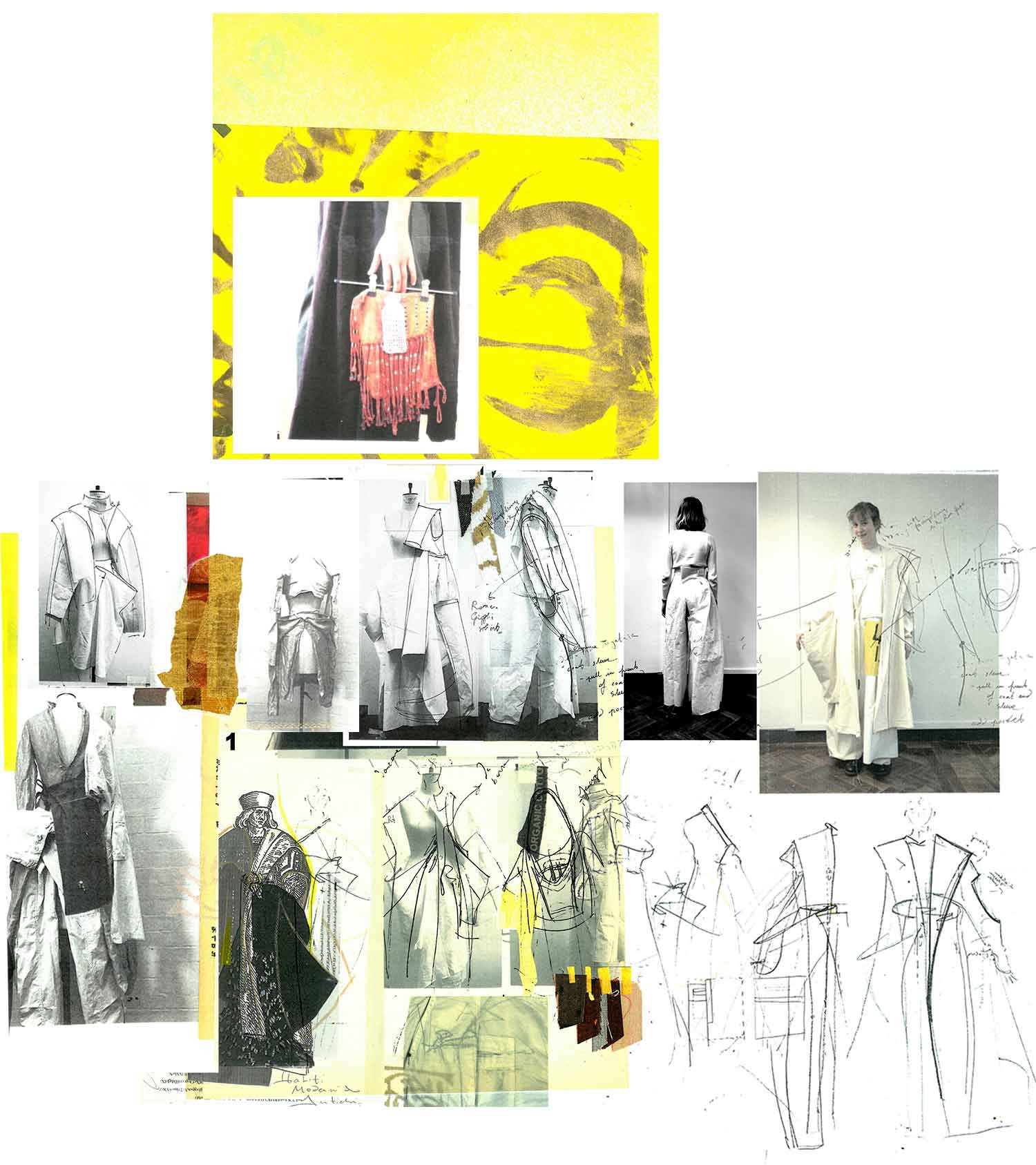 As one of the unique products of XVI century Venice, the brocadèli fabrics distinguished from traditional brocades by their combining of linen and silk. This manufactural detail made them minor quality fabrics at the time... the idea that, today, brocadèli are remembered by some as ‘cheap’ products, but also as something worth selling for today’s ‘merchants’ - fabrics of enormous value for their natural fibres and handcrafted manufacturing became the main point of reference in Caterina’s textile research. The cardboard punchcards used in the manufacturing of brocades became an important inspiration for print and textile of the collection. 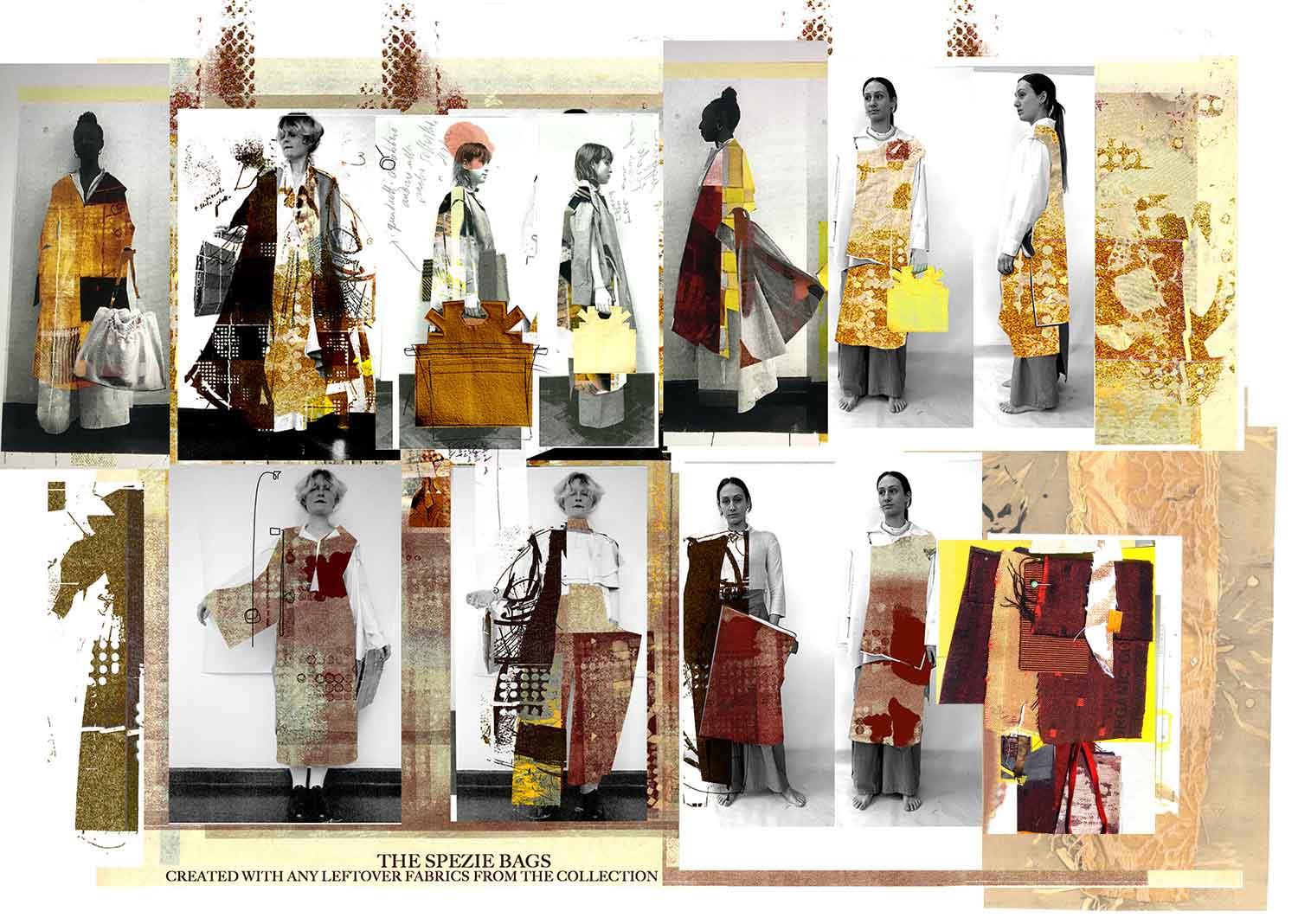 ‘We were Merchants of Venice’ works to use discarded materials and present them to the world imbued with a new, unique stylishness and subtle functionality; a merchant-like gaze towards ‘the different’ that sees details and understands their value with attention to detail and functionality, finding richness in less than apparently rich materials and melt gender-differentiated design canons allowing more personal expressions of identity through clothing. 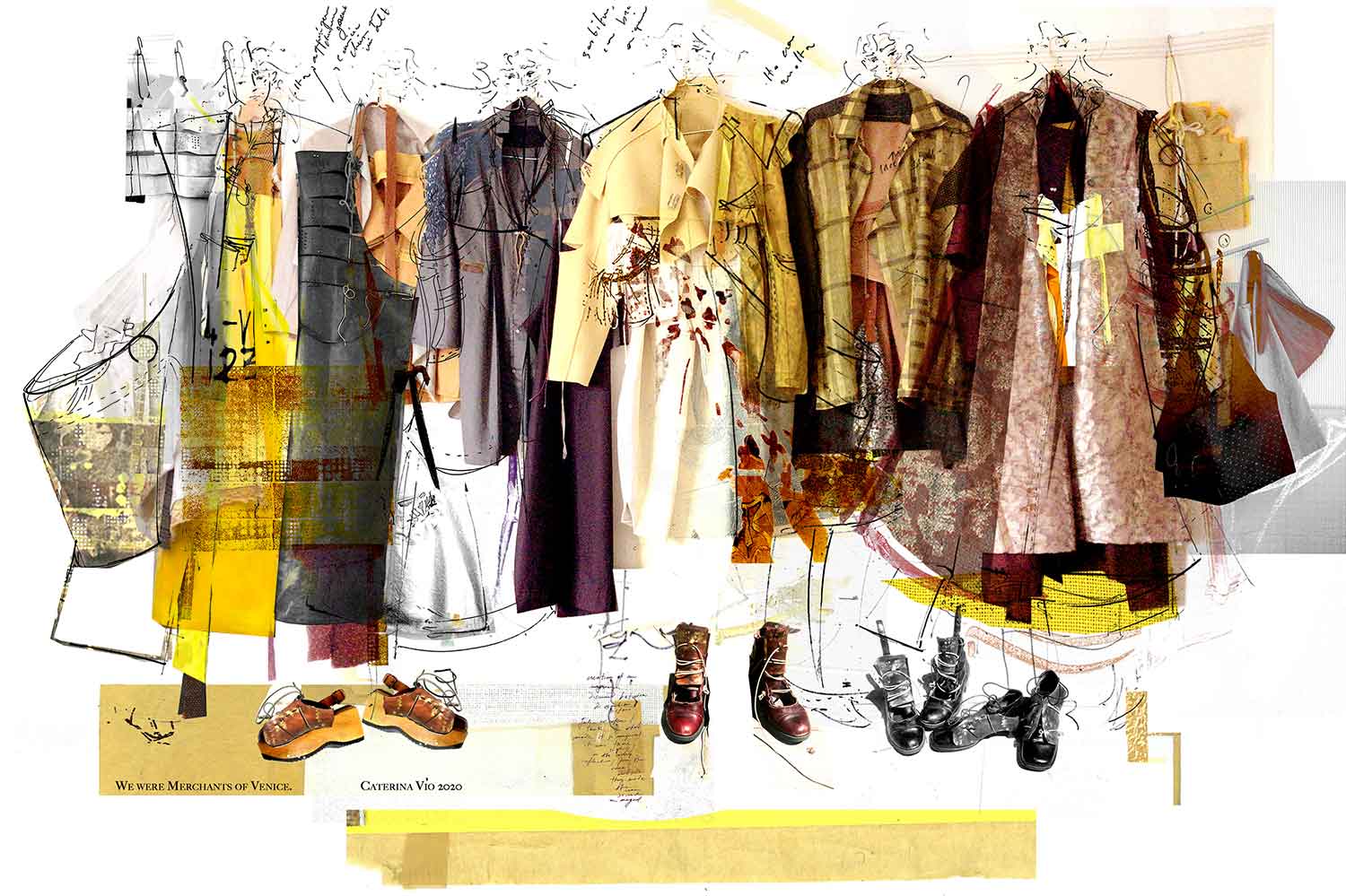