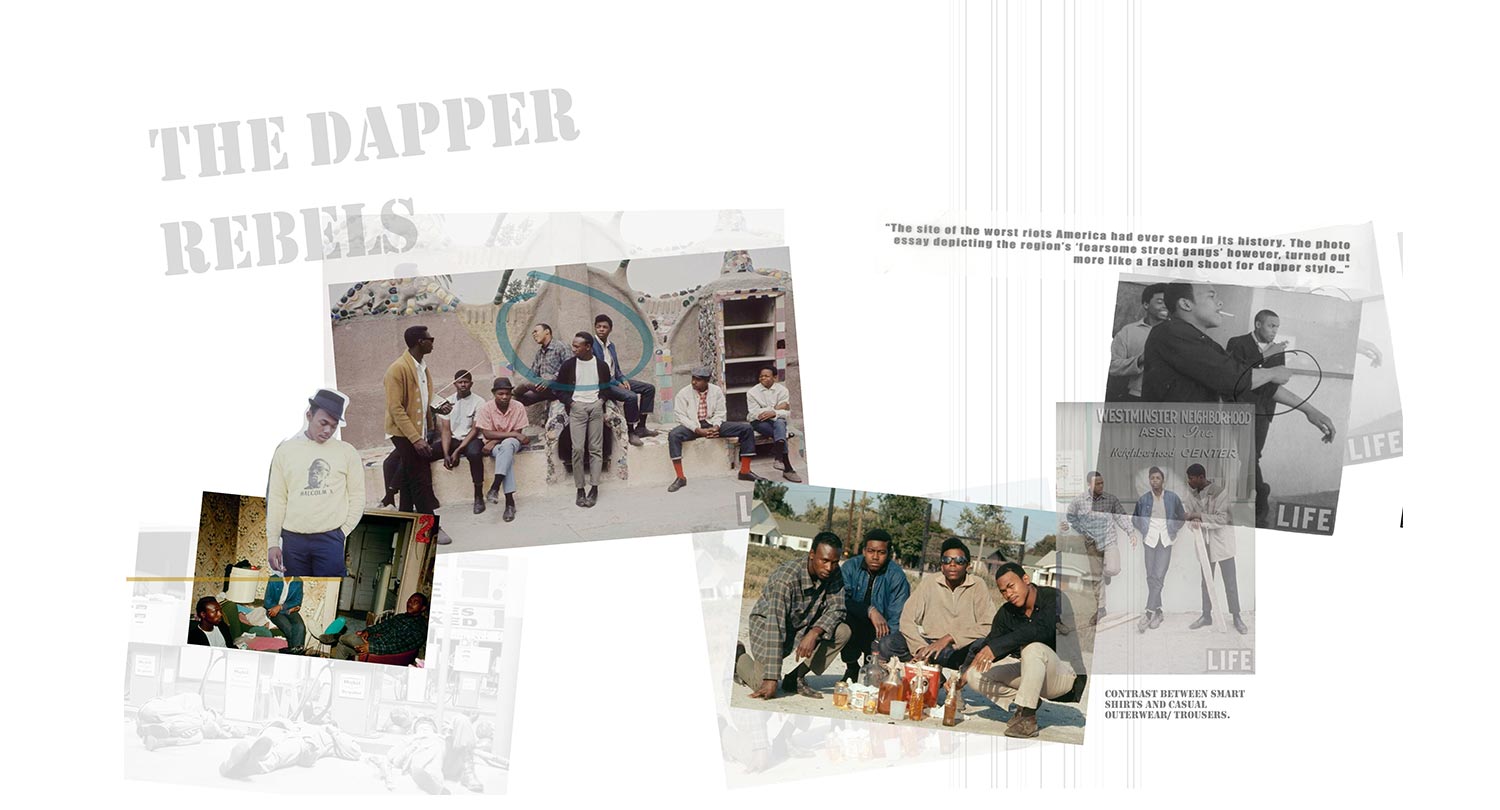 Elle Barclay’s graduate collection ‘The Dapper Rebels’ was influenced by The Dapper Rebels of LA, n 1965 riots broke out in the Watts neighborhood. The photos depicting the regions ‘fearsome street gangs’ however, turned out like a fashion-shoot for dapper style… Decked out in preppy cardigans and high-waisted rolled up trousers these young men were an unmistakably dandy bunch in contrast to the oppressive environment they were living in. 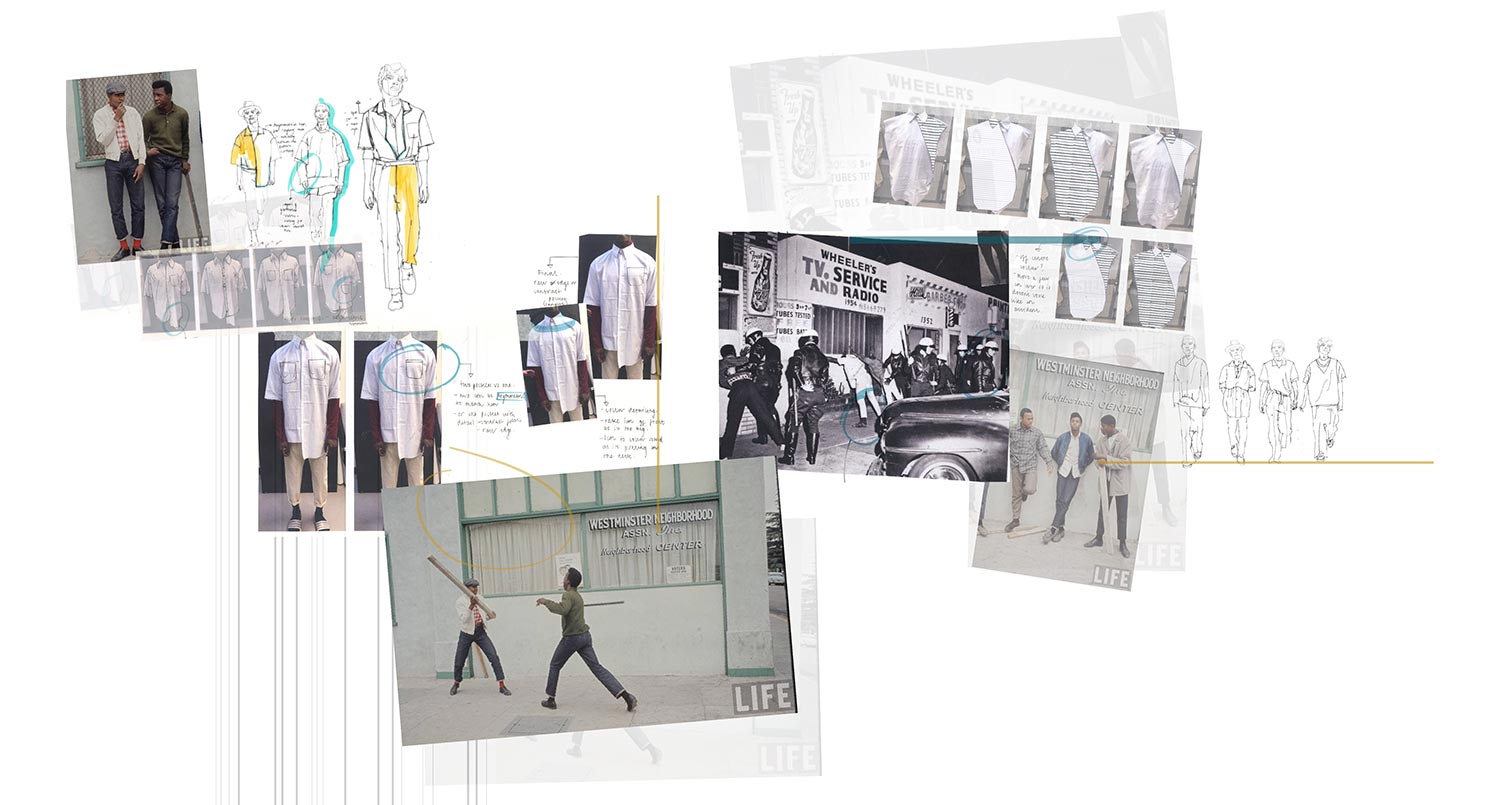 The pattern-cutting technique in Elle’s collection really stands out as it is taking traditional items of a mans wardrobe, especially shirting, and turning them into new statement pieces by combining the dapper style of before and then after rioting. After collaging elements and objects of this lifestyle together, Elle found it useful in finding unique silhouettes and designs. This concluded in asymmetry, draping and un-traditional fabrics used within traditional garments. Part of Elle’s thought process was considering how these garments are timeless items within a man's wardrobe and how they can help slow the pace of fast fashion, by showing ways you can pair traditional items in unique ways, and style creatively to turn these timeless garments into something trendy and relevant without buying something new. 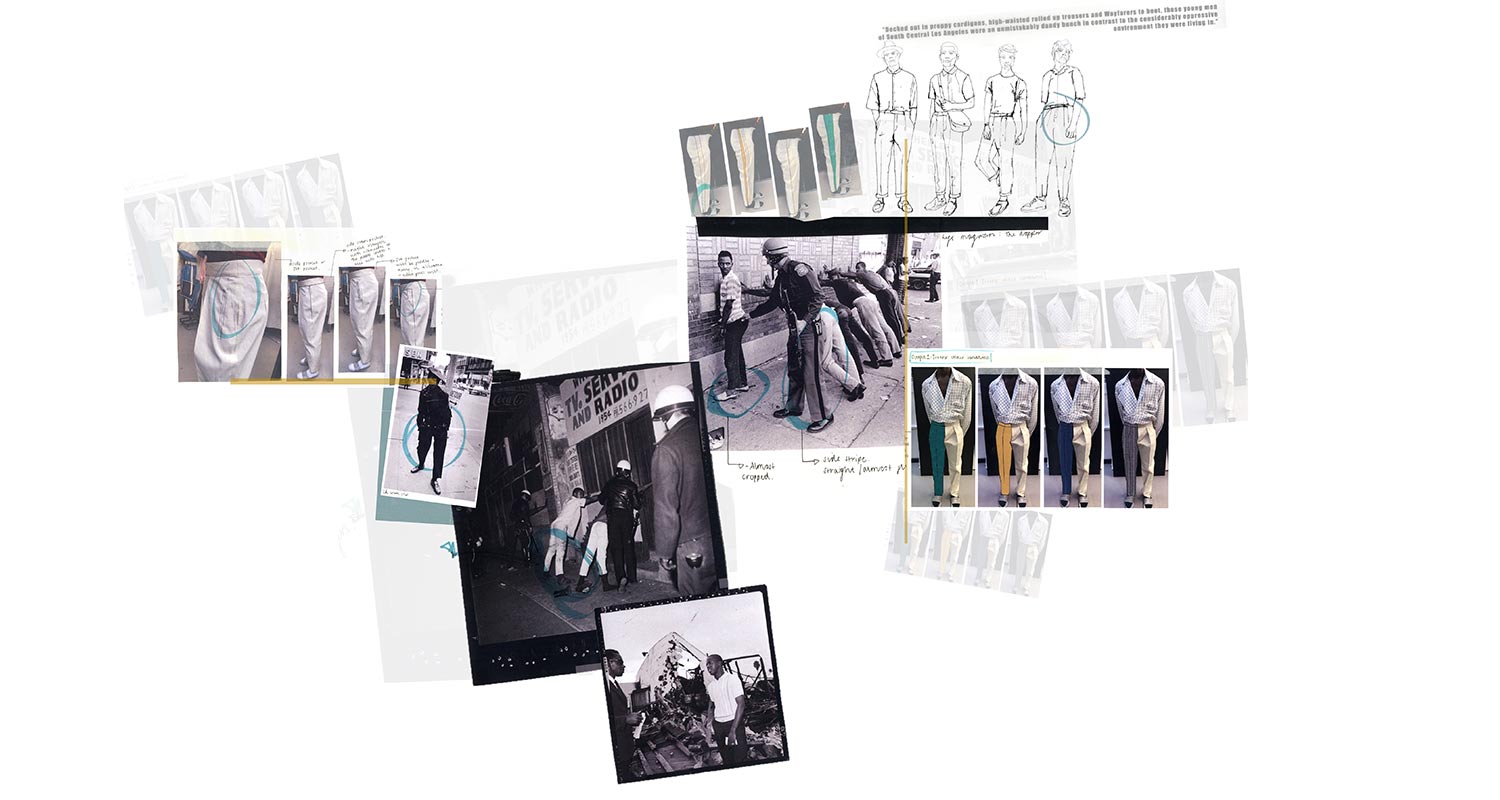 Additionall by combining the style, aswell as social barrier, of the ‘Dapper Rebels’ and the contrasting police uniforms she was able to find the perfect combinations of unique fabric choiceand more traditional silhouettes - for example the leather tailored style jacket, the harsh leather inspired by the police's heavy jackets, paired with a smart and clean silhoutette. Elle’s collection also has a mix of stripes, patterns and checks which was inpsired by the surrounding envrioment in the imagrey, such as road markings, shop windows, and lighting wiring before and after destruction. 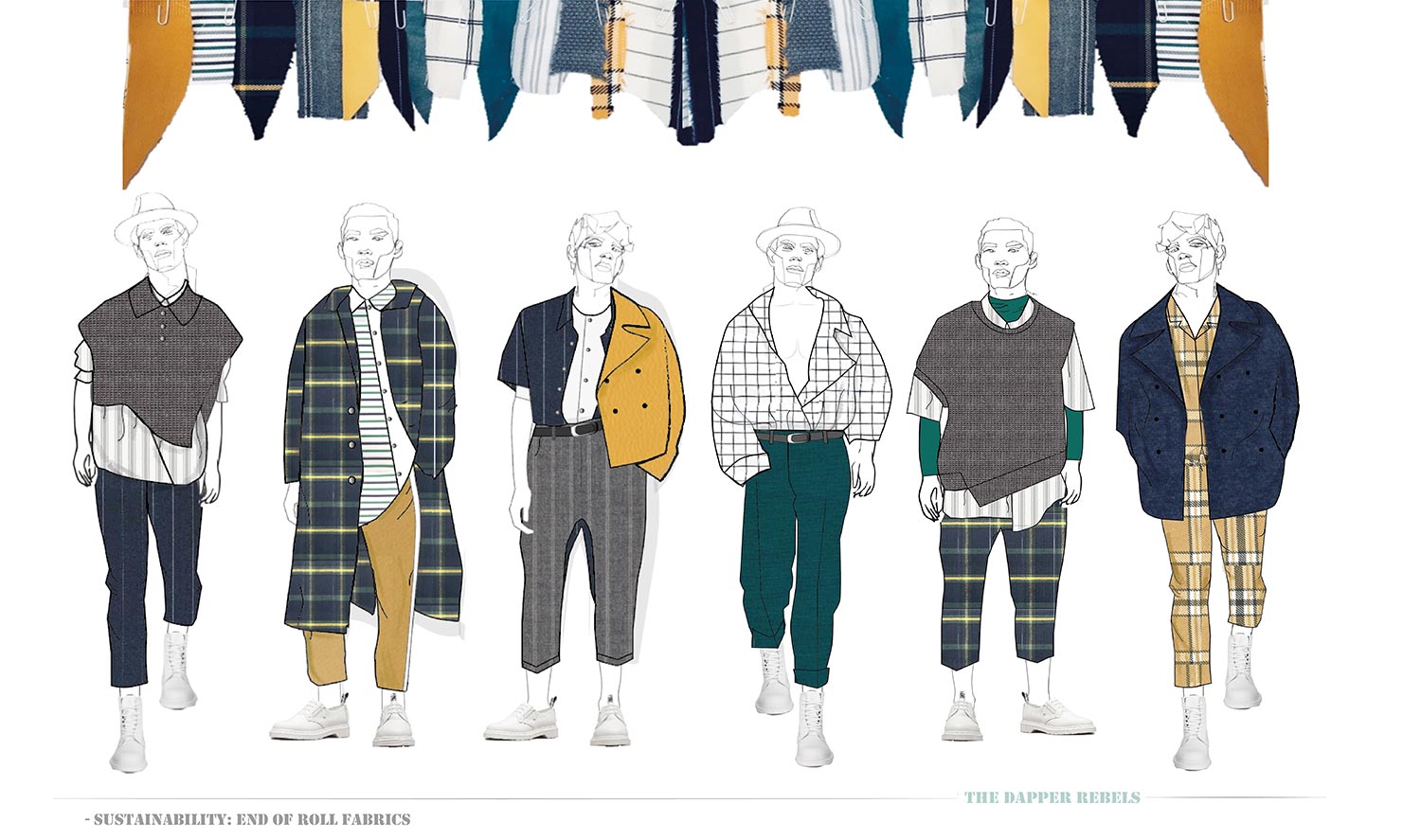 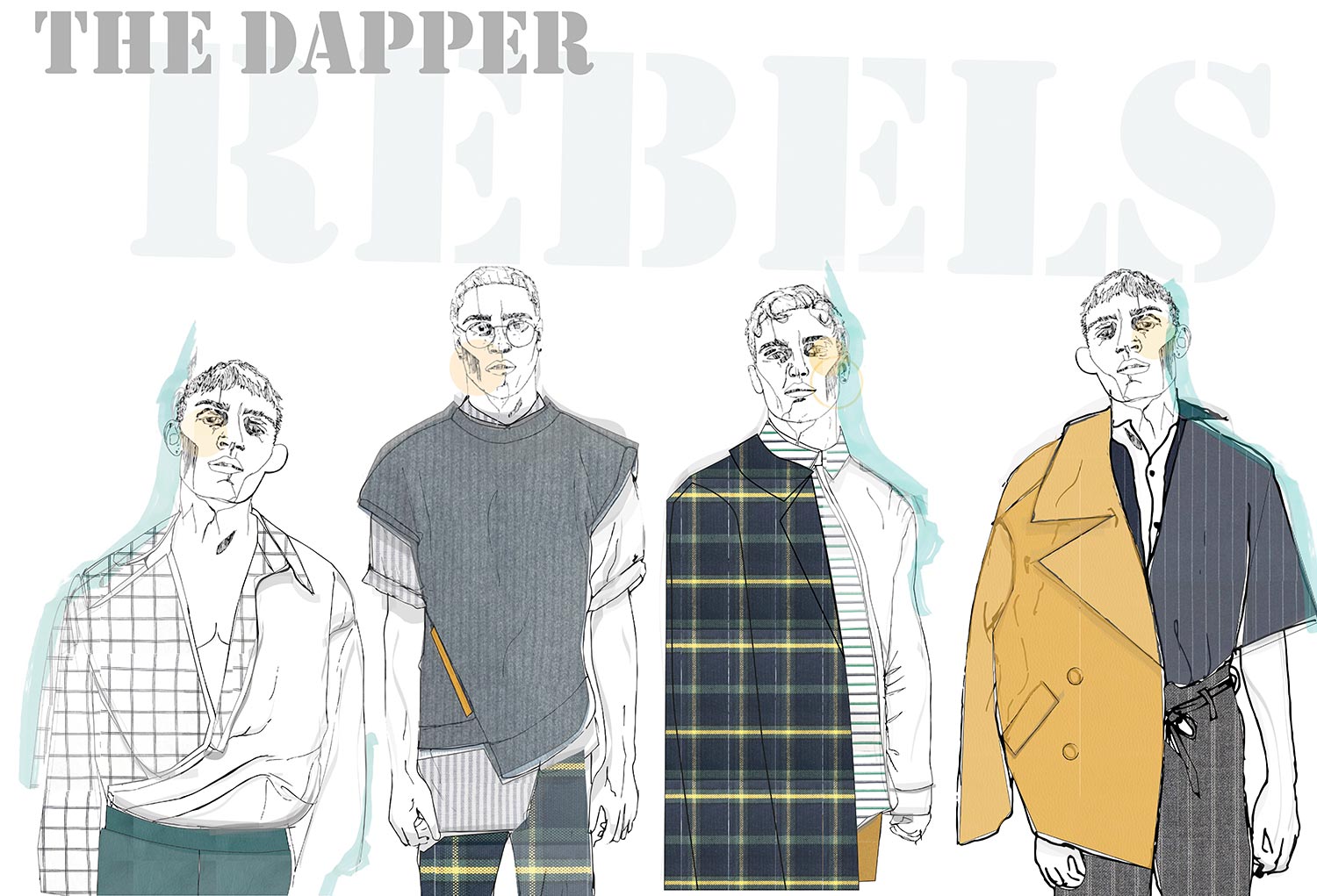