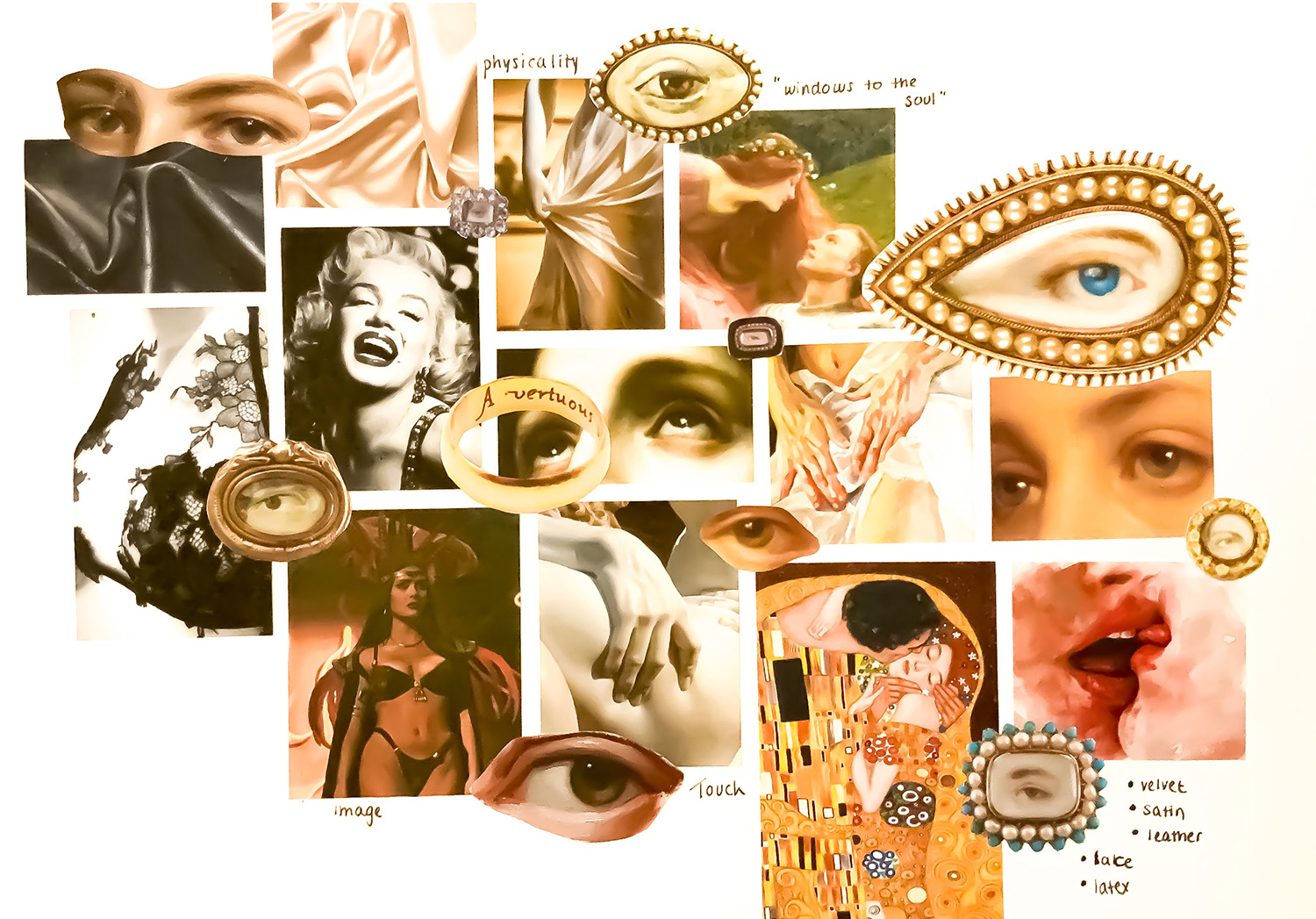 The Seducer's Gift was heavily inspired by the information and insight provided by Robert Greene's book - The Art of Seduction. More importantly the seductive character of the Dandy was the inspiration for the presentation of these pieces. Timeless, elegant, controversial and expressive. The book focuses on the seductive interaction between the seducer and their 'victim.' How to pick your 'victim', how to seduce them, how to mask your seduction and so on. But, could a seducer seduce their 'victim' through jewellery? They are to be gifted from the seducer to whom ever they chose. However, most importantly, only the seducer can trigger the seduction by interacting with the jewellery, either by strumming, blowing or fluttering it. The 'victim' is only to wear them and expose them to the seducer. Almost like a dance - one initiates and the other takes it further. 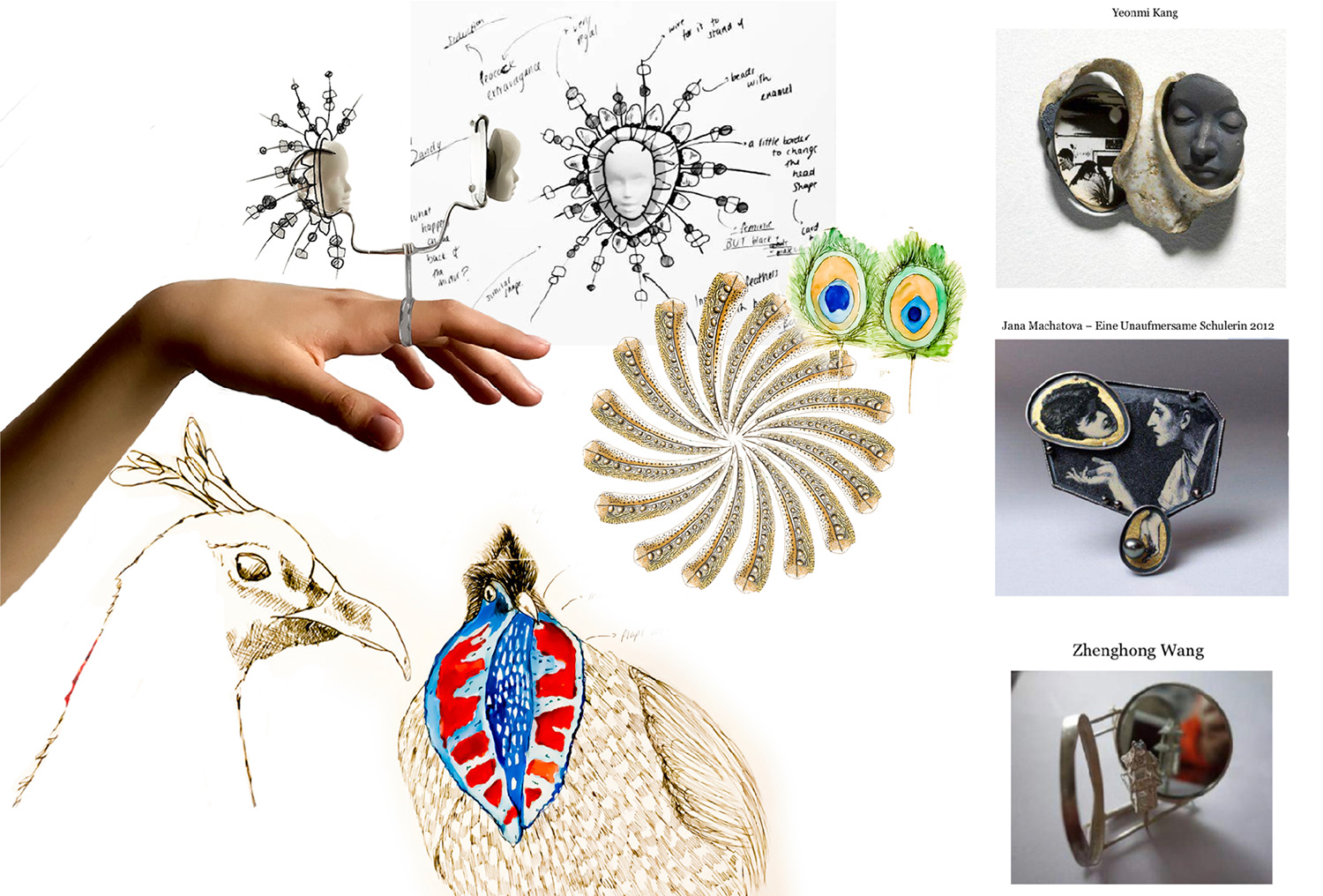 I began with the expression of physical seduction between people. This included materials, body language, image, the use of the eyes, touching and even the physical act of commitment. The interactive element was key to achieving the perfect seduction through jewellery. Seduction with a more performance quality was that of the wild. Between birds, there are elaborate dances, patterns and colours that are put on show to allure the counterpart. The jewellery had to be all part of the show, an intimate performance between two people. I was in need of something that was more visual rather than emotional to help push tot he right direction. 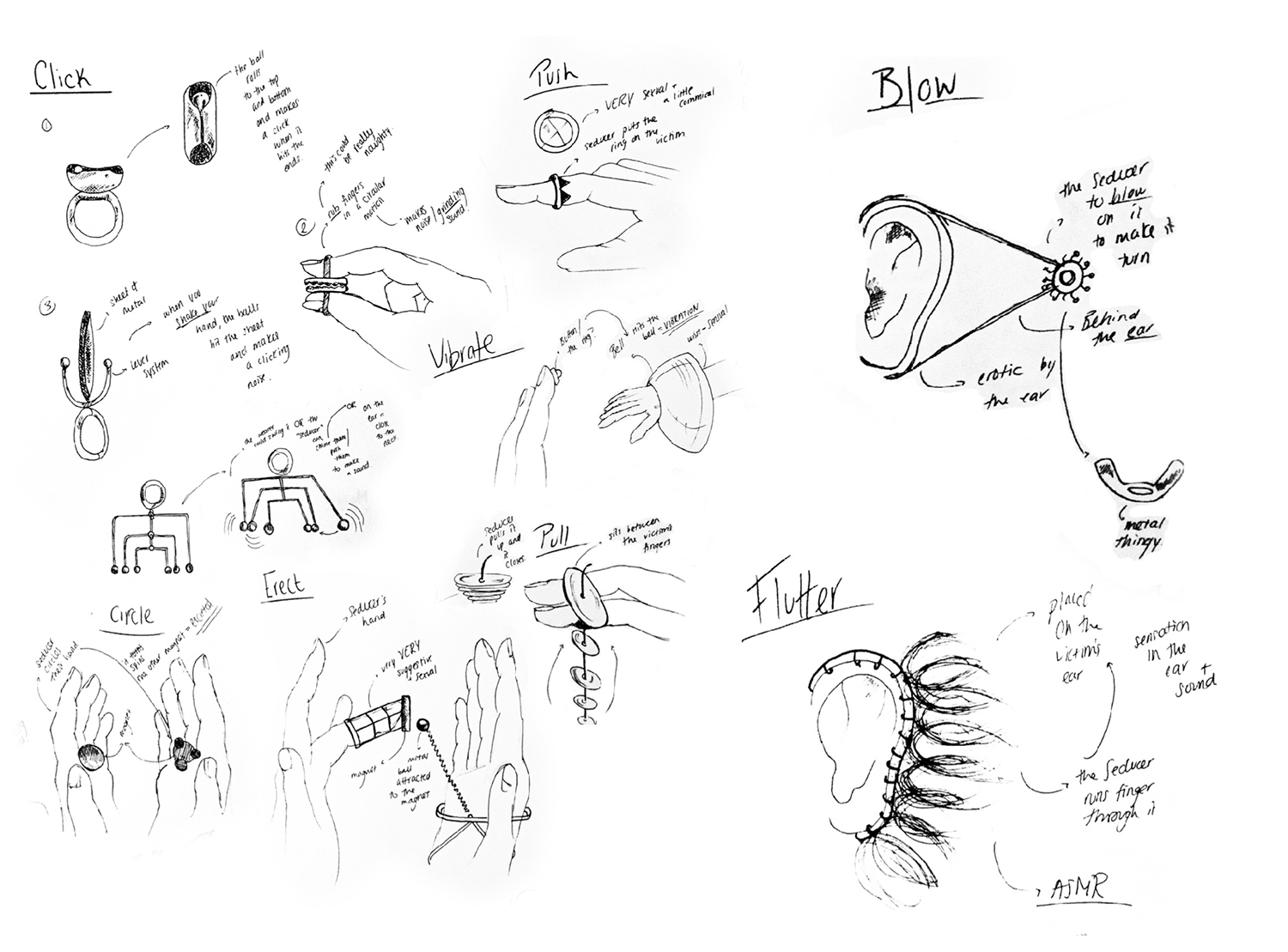 Designing from words only derived from sexual seduction brought forward a more playful and interactive angle. The aim was always to involve two people, one intended to be the seducer and the other to be the 'victim.' It became suggestive and more physicals. The concept of ASMR was also an interesting research point. The idea that sound can make you feel something, whether it be tingles or feeling relaxed was something that had to be involved in my designs. Involving the senses or even heightening them through someone else's behaviour made the whole seductive process feel vulnerable yet powerful at the same time. 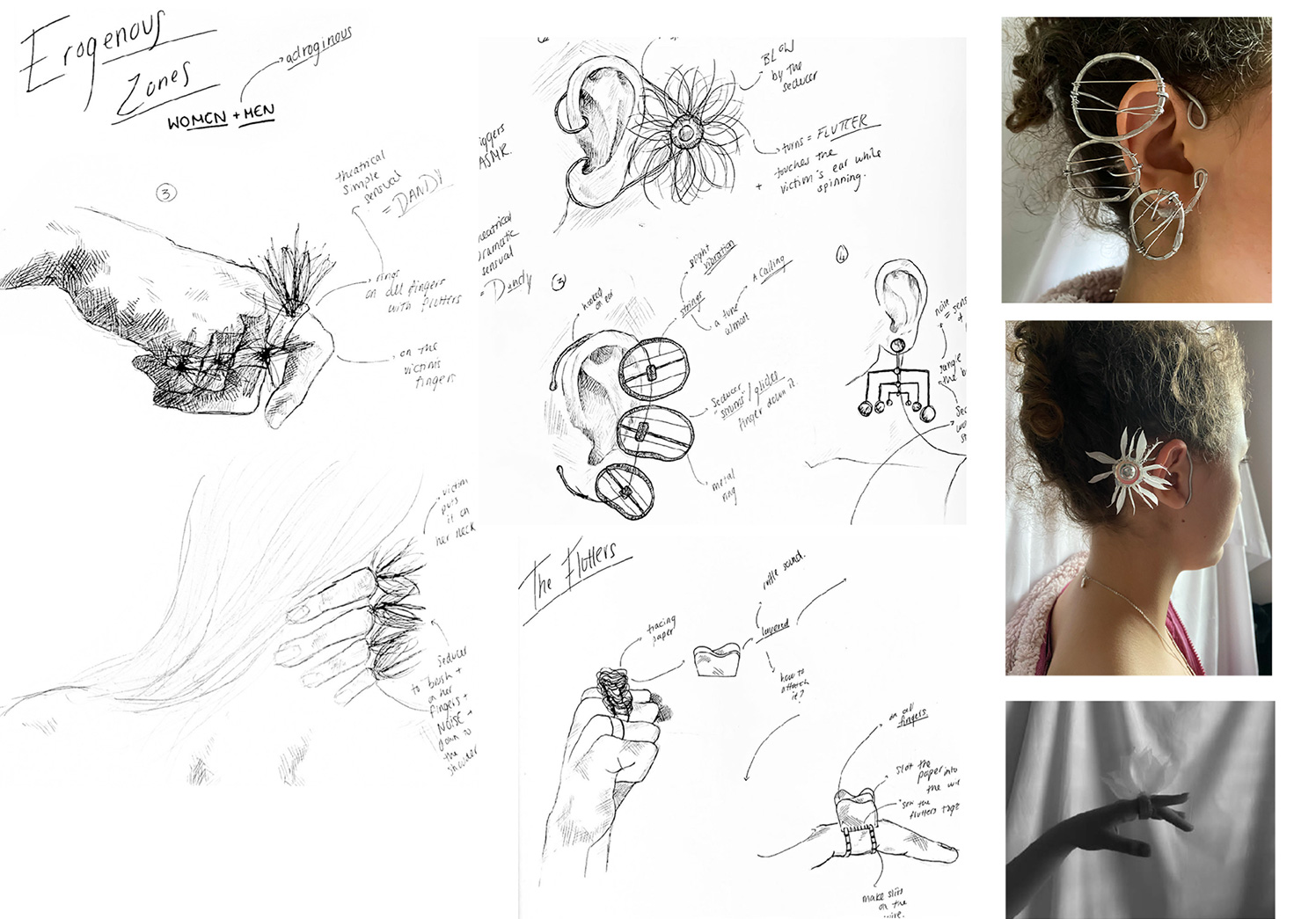 Strum, blow and flutter. Learning about the erogenous zones of both male's and female's added a lot of depth to the interaction between the seducer and the 'victim.' The top three for both men and women were the neck and ears. They are both very sensitive areas that can trigger strong emotive and physical responses. This is where the seducer and their 'victim' form a more playful and suggestive connection. Subtly was a main focus. I believe that there is much power in subtly. Being too obvious, especially during seduction, ruins the experience and the 'victim' backs away. Although the jewellery has a very performance quality to it, the function or how it is interacted with is where the subtly lies. 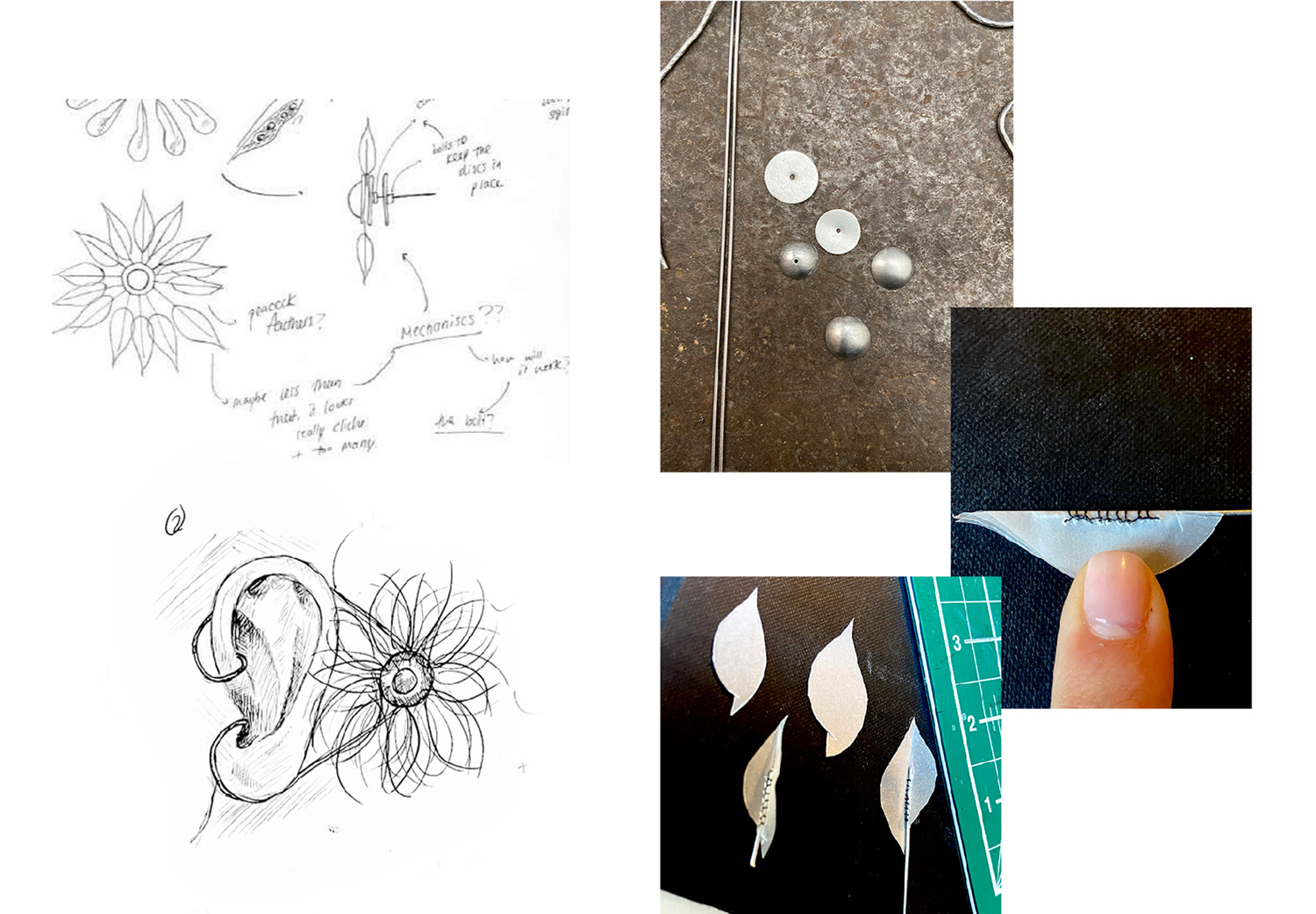 All three pieces are made of metal mixed with more delicate materials such as s tracing paper. The main inspiration from the Blow earring were the beautiful feathers that pheasants would put on show to dazzle other possible mates. I combined that with the idea of blowing into somebody's ear, almost like when somebody breathes near your ear. I voided using heavy metal so that the seducer would not have to blow too hard and ruin the delicacy of the interaction. So aluminium was used to offer more flexibility. The tracing paper was cut into two leaf shapes and then hand stitched together on wire. They are opened wide apart so that the blow from the seducer had surface area to push the whole earring round. While you can hear the seducer's breath you can also hear the slight meta rubbing against each other which also makes a very satisfying sound for the wearer. 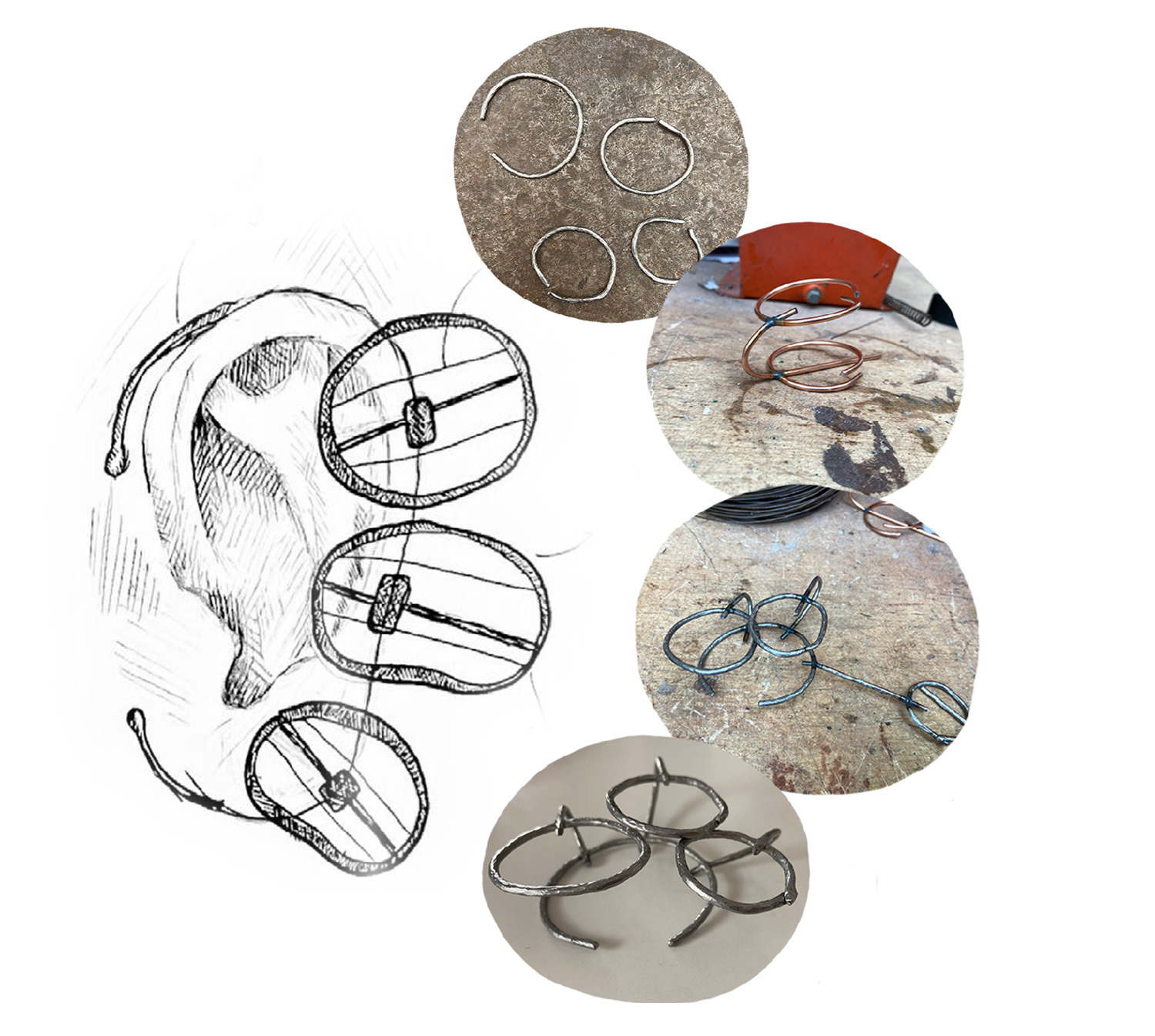 Strum was inspired completely by a guitar. I wondered would that would be like if it was all on your ear. The act of strumming or running your hand over something acted as a perfect action to seduce. The metal was beat with a hammer first to add some texture and then welded together to create its shape. Holes were made on each side of the circles to make space for guitar strings to be tied into and then strummed. It is almost like the seducer is playing a song for their lover. The flutter ring was made with metal and tracing paper also. Each finger has a stacked ring so that the tracing paper could be slotted into them. The tracing paper is cut, rearranged and then hand stitched to then be slotted into the ring. The tracing paper makes an incredible fluttering sound, imitatating the butterflies or the flutter one might feel while being touched. These rings are to be placed on the neck so that the seducer can run their fingers from the neck, to the flutters and then down their lovers arm. 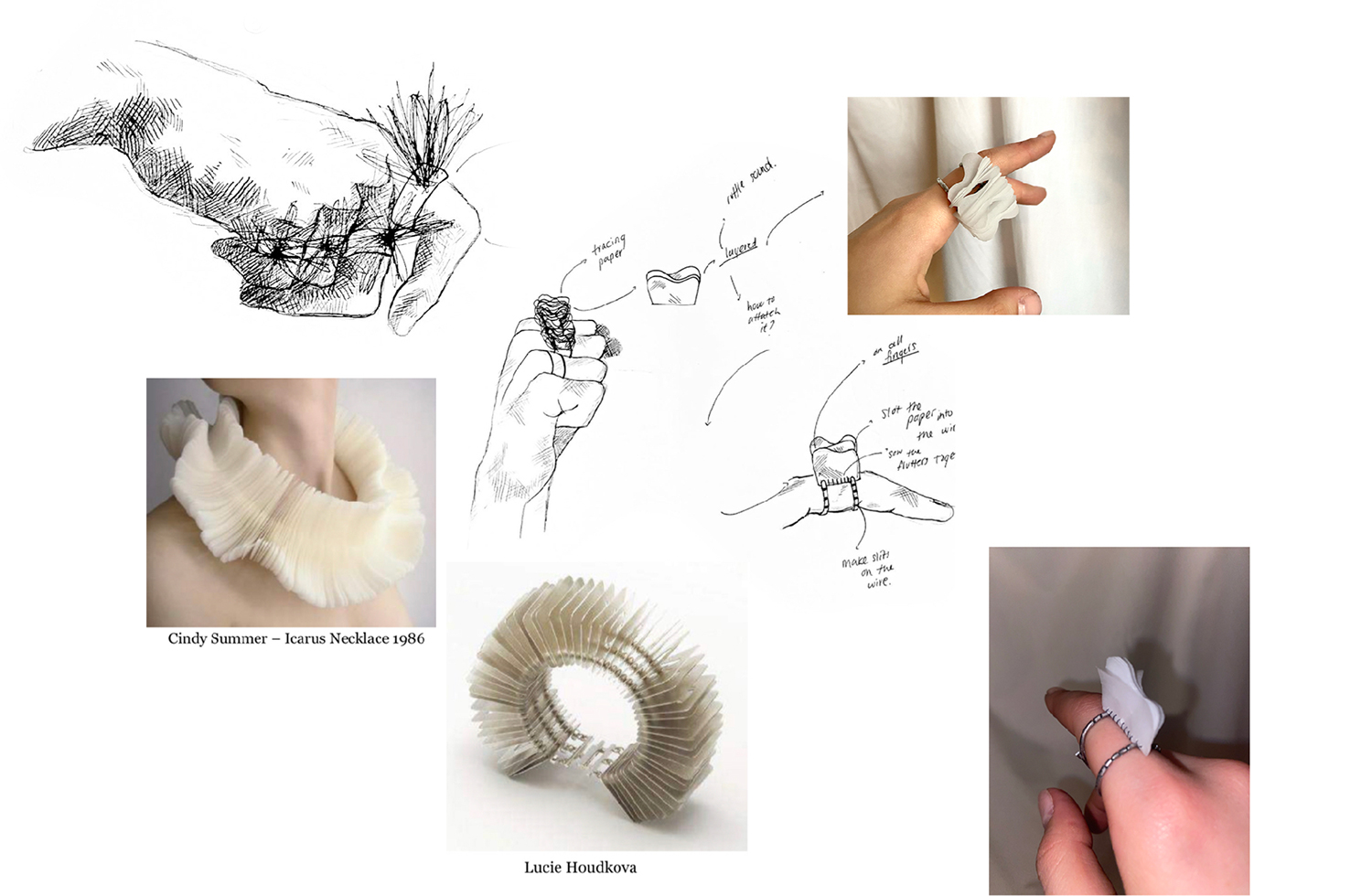 These pieces are aimed to emphasise the interaction between the seducer and their victim. It is exciting, playful, subtle, a great performance between two or three people with vast attention to detail and physicality. The concept of it being subtle, almost like a secret, between the two was what really drew me in. Can jewellery be used as a way of seducing somebody? To add to the excitement and allow for more physical and emotional interaction in a very unconventional way.
?
Top