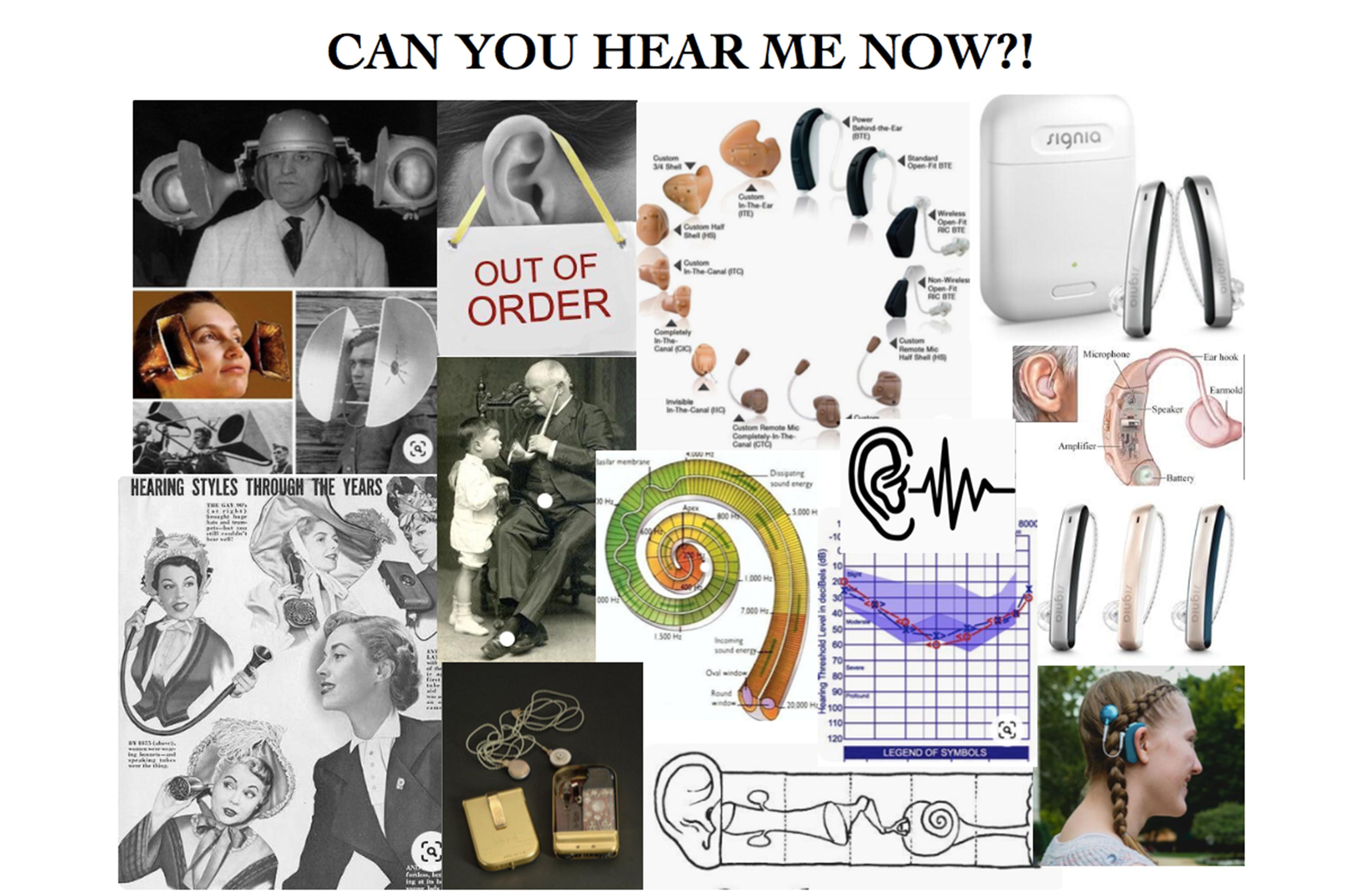 Lea Vrebac 3rd semester collection „Can you hear me now?!“ discuss the social situation of the hearing impaired and the revolutionary development of hearing aids. At the beginning of the 18th century people with a hearing disorder were excluded from the society and were treated with less respect. Today a lot has changed. As a person affected, she has been wearing hearing aids since my childhood, she knows the difficulties that arise in everyday situations. This designs should show the world that hearing impaired people are a “normal” and natural part of our society. A hearing aid should not be hidden, but worn proudly, like a unique accessory. Her collection is based on a bright colour palette, especially the colours red and blue and their different shades, which represent the two graphs in a audiogram. Red for the right ear and blue for the left ear. Every Outfit tells a unique story based on my hearing disorder experiences and the historical development from the first hearing aid until now.

The first look, which can transform into two looks, represents the huge and heavy hearing aids of the 18 century. At this time people with a hearing disorder were excluded from the society and were treated with less respect. So she wanted to clarify that from the outside you first see the audiogram, which is only a piece of paper, that tells you if you are hearing-impaired. But from the inside you are still the same, bright person as before, you are still human. Here she has also printed her own audiogram on fabric, which makes it unique and connected to herself. The lines on the skirt have also a special stitch, that should represent the sound waves. The mask constitute that people in those days hid themselves and their disorder.

The second look tells Leas own story with my many doctor‘s visits and the endless hearing tests. Thats why the skirt looks like a medical scrub and the ruffles on the sleeves and on the ear shaped cape look like sound waves. At this time, at the age of 6, she got her first hearing aids and she was often being asked if she can hear them now, thats why the question is lettered on the cape. The mask constitute that Lea always hid her hearing aids in primary school, because she was ashamed. 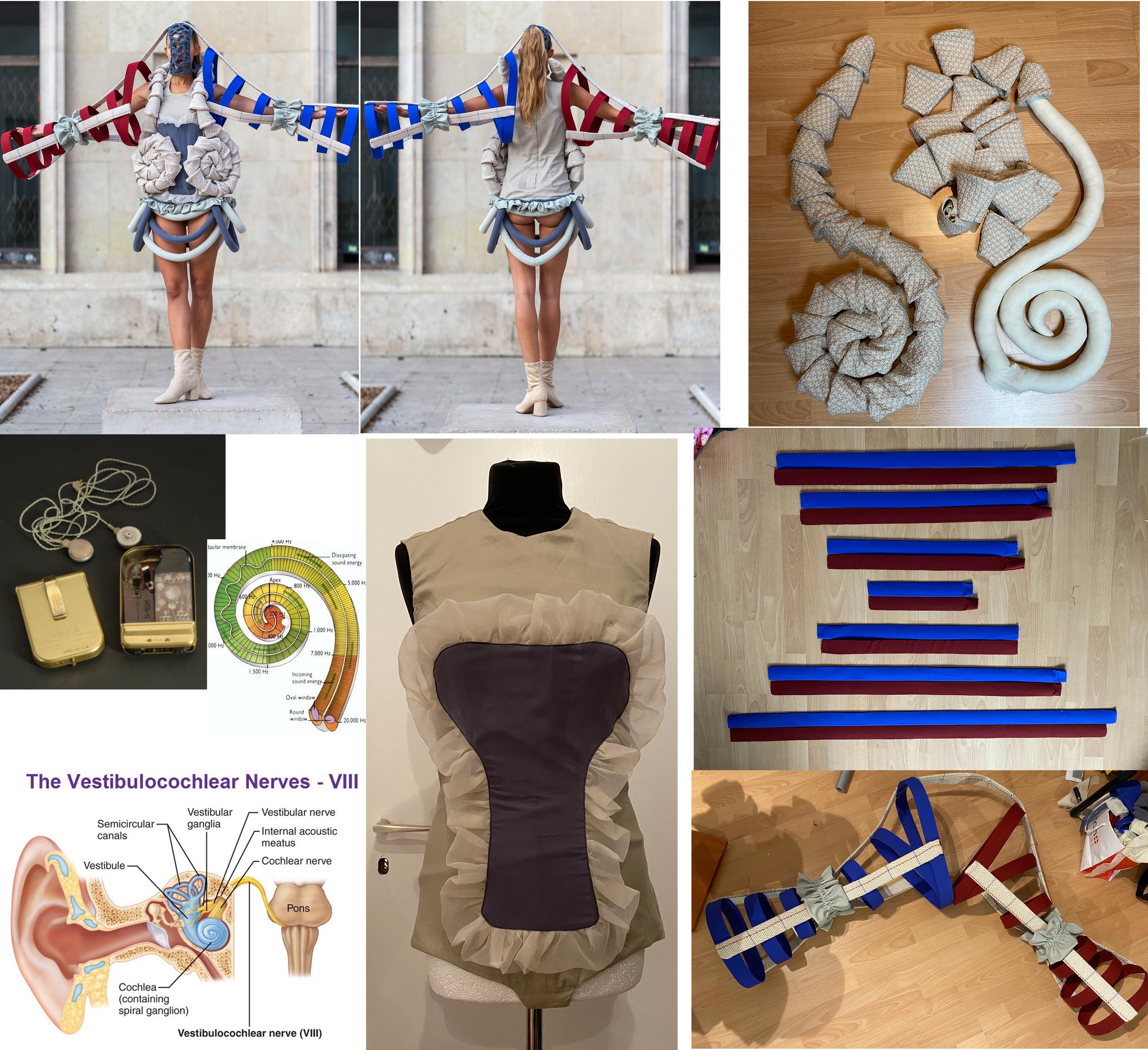 The third look shows that hearing aids are much smaller now, but you can still see them. You can see the mask doesn‘t cover the whole face now and the ear area is bigger, because now you can hear better with the new hearing aids. The two spirals represent the cochlea, which is made of many small pieces. Here she mostly used organic cotton in nude tones. The big „scaffold“ shows that the right side of the body and ear is always marked with red and the left side with blue. It is directly connected with the ears and indicate the path of the sound waves from the environment to the ear.
The fourth look reports the next step of the hearing aid technology. The mask is gone and the outfit is a lot plainer. Now you can finally answer the question from the second look with „Yes, I can hear you know!“. Here she also worked with print and used her own audiogram. 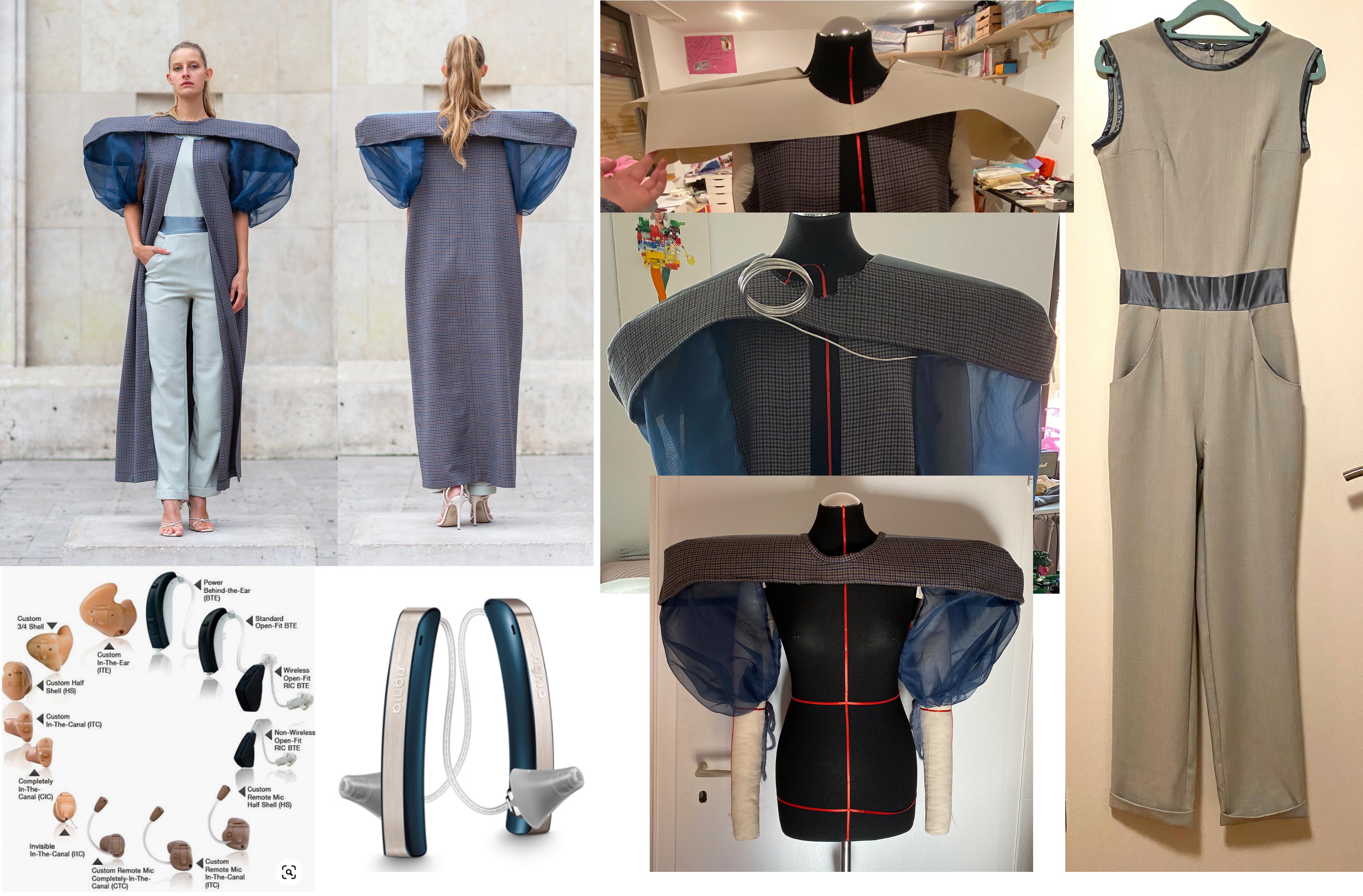 The fifth look shows the newest hearing aid high technology. They look very elegant and simple now, as well as the outfits. Also you are not ashamed to show them anymore. This semester she had the chance to work with one of the biggest hearing aid companies „SIGNIA“, which is also her sponsor of this collection. Thats why her inspiration and the colore palette is based on one of the new Styletto X hearing aids from the company.

The sixth and last look again shows the transparency and simplicity of the newest hearing aids from today. The sleeves are shaped like an ear and the nude fabric represent the metallic gold effect from the nude hearing aids. The lines from the pants again constituted the sound waves which are transparent now. For the head piece she used the slogan „Life sounds brilliant“ from the company „SIGNIA“.
?
Top