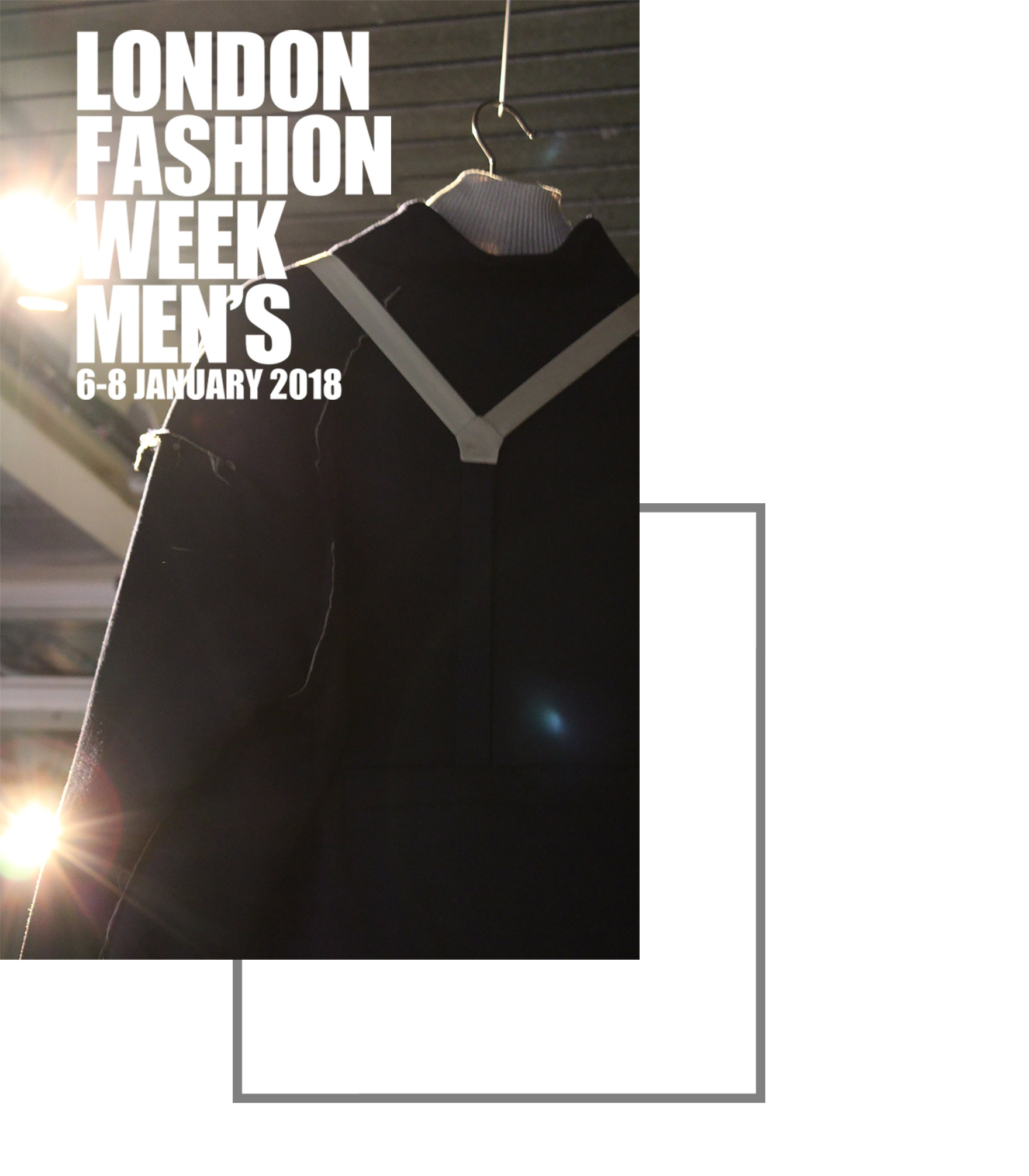 London Fashion Week Men's Autumn/Winter 2018 kicked off with the celebration of the 11th season of biannual celebration of British menswear. This time round the schedule was more chock-full than ever before. In the world of men’s fashion, London has always been deep-rooted in classic tailoring, and I would bet no other cities could excel how London does. Without exception, we were again excited to be mesmerised into the true spirit of British tailoring tweaked with a sense of humour. J JS LEE and D.GNAK particularly boasted themselves in this field of interpreting pragmatism and unique aesthetics. That was usual, but still attractive enough to take up your wardrobe. London is well aware that diversification benefits either your investment portfolio or men’s fashion. The DNA for practicality and hip street vibe was translated in more dynamic ways. Quite unusual for conventional AW season, Christopher Raeburn and Bobby Abley used fluorescent or technicolour to brighten the catwalks. Also there was a heavy focus on fabric manipulation and the exploration of unbounded gender norms. 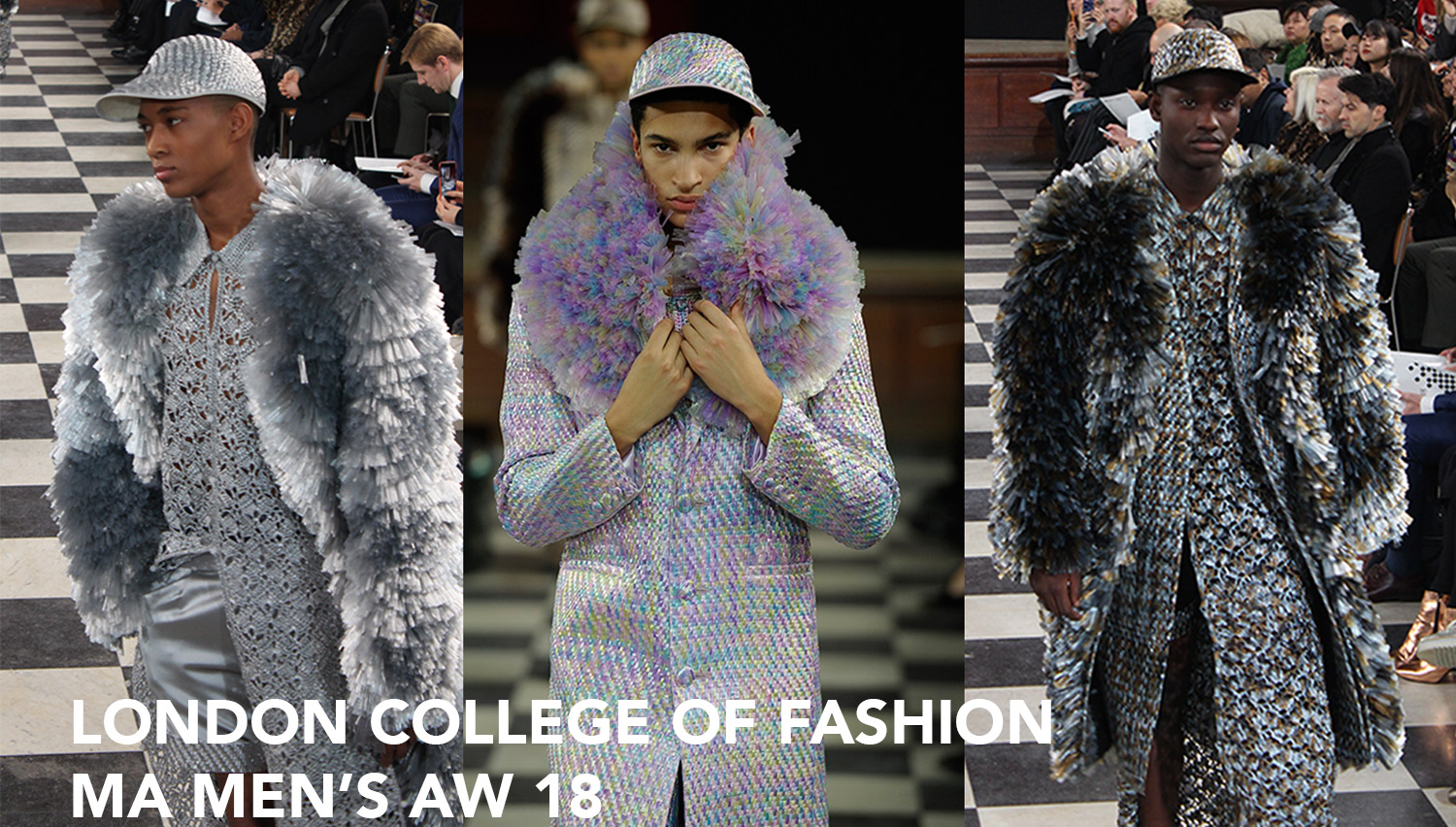 At this year’s London College of Fashion MA Graduate show, there were 10 designers on the line-up who heavily concentrated their attention on tailoring and textile construction, rather than make a bold statement with political slogans flapping around. It seems that the designers were swathed away with the wind of rationalism. Most interestingly 9 out of the 10 selected designers were from China and Korea, which might indicate the advent of a new era for Asian Designers. This could possibly align with the fact that economic growth is moving from mature regions in the West to emerging markets in South and East. 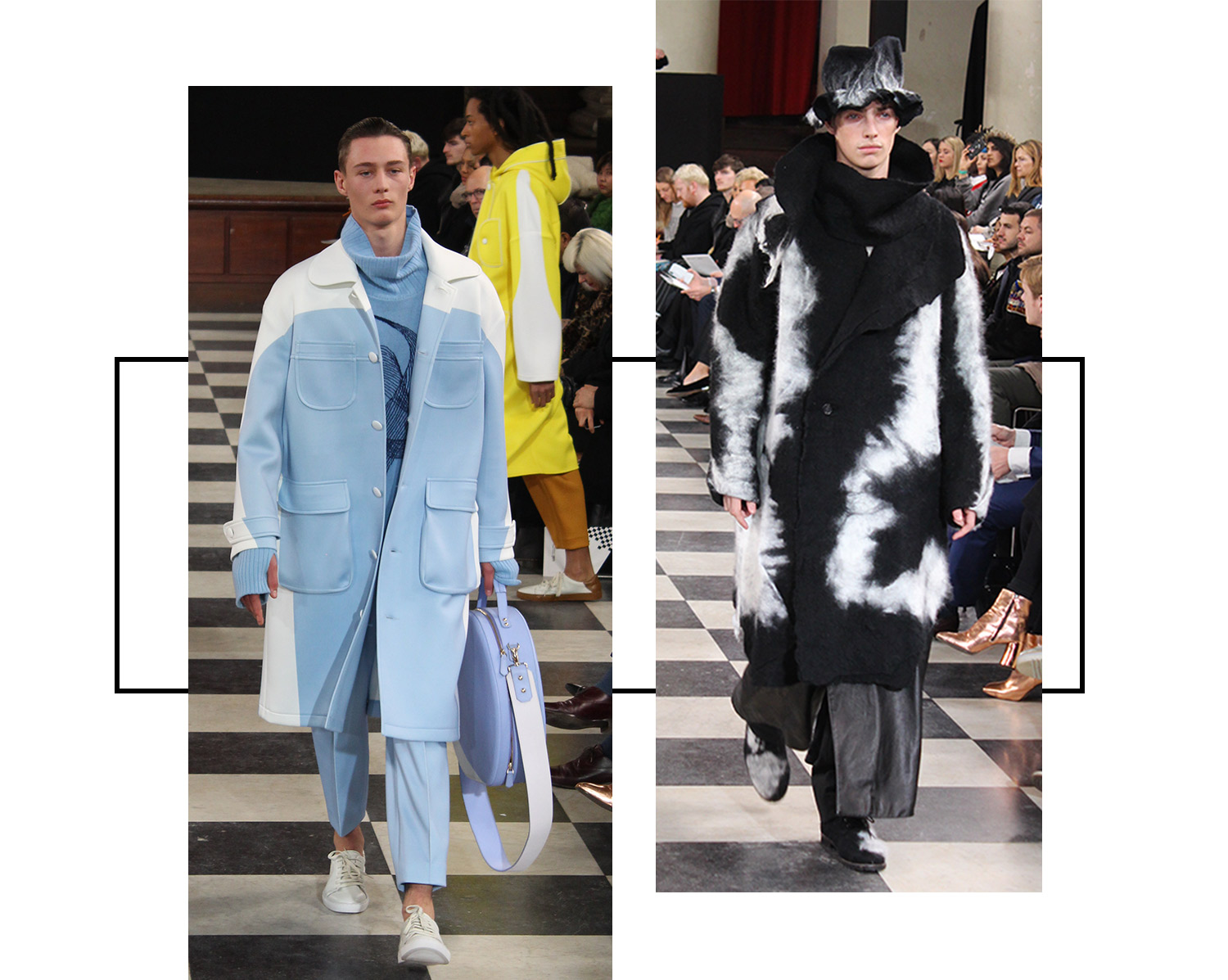 The graduate designers seemed to understand well the importance of pooling out the technical advancement of the manufacturing industry to their collection, clearly proving that they are not spring chickens anymore. Particularly, Xu Bo’s shimmering multi-coloured textile and Ming Lai Lee’s black and white dreamy fabric stood out not for only its aesthetic but also its high quality.

This season, generous Phoebe allowed the models to have freedom to hang around and chit chat in the presentation place surrounded by design toiles. With sober colours of dark navy blue and charcoal grey generating the subtle gentleman looks for the minimalists, Phoebe created a bold statement with an all red look and accessories. Her collection was a total focus on textile and surface textures.
Ever proud of her heritage, English produced her collection in the UK using natural fibres, and she collaborated with British Millerain to source the dry waxed cotton for the outerwear, which she shaped into shopping bag carrier shaped bags and flat tote backpacks, hung casually amongst the soft knits and waxed cotton. Smart details added a smarter edge to the traditional menswear with detail being trimmed with scalloped sleeve overlays and long smock slips worn under full-length trench coats. 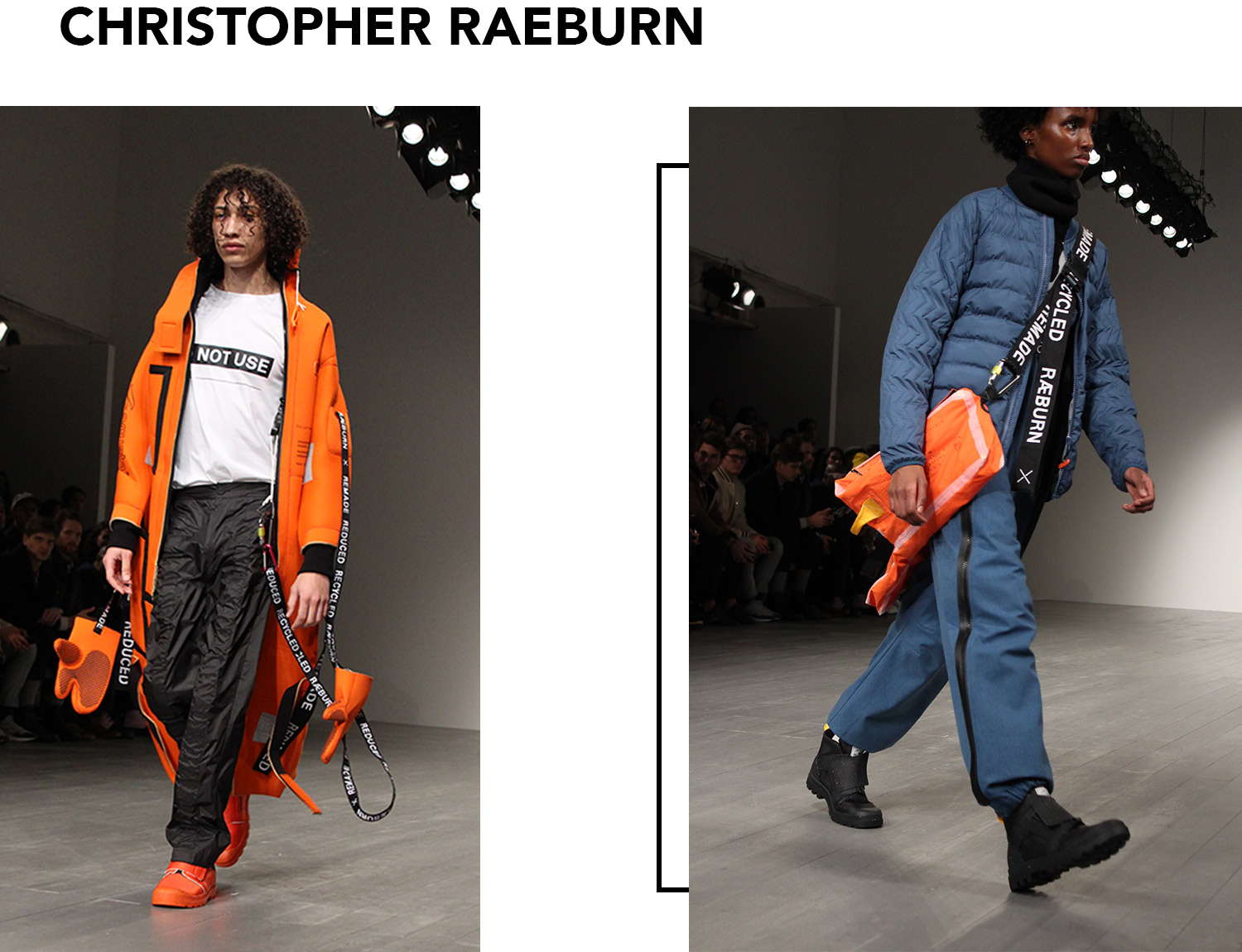 Christopher Raeburn surely has a betting eye for future sales. The extreme cold has been raging recently in London, and the US is in the grip of record-breaking freeze days after a deadly ‘bomb cyclone’ struck. Inspired by the ocean, his collection was all about protection from rough sea, whilst capturing the beauty and fragility of our oceans.
Christopher echoed his core ethos (REMADE), which was further highlighted via the use of pioneering materials including fluorescent orange colour protective neoprene immersion suits and Royal Air Force helicopter winchman coveralls. Staying true to the Sustainable Intelligence philosophy, sustainable material sourcing and considerate design were meant to be functional and pragmatic, rather than purely aesthetic. The collection was full of 90’s grunge feel with obvious logos loudly shouting out on the slogan ‘Recycled’, ‘Reduced’, and ‘Remade’. Raeburn partnered with Avery Dennison again for this season, exploiting technological advancements. 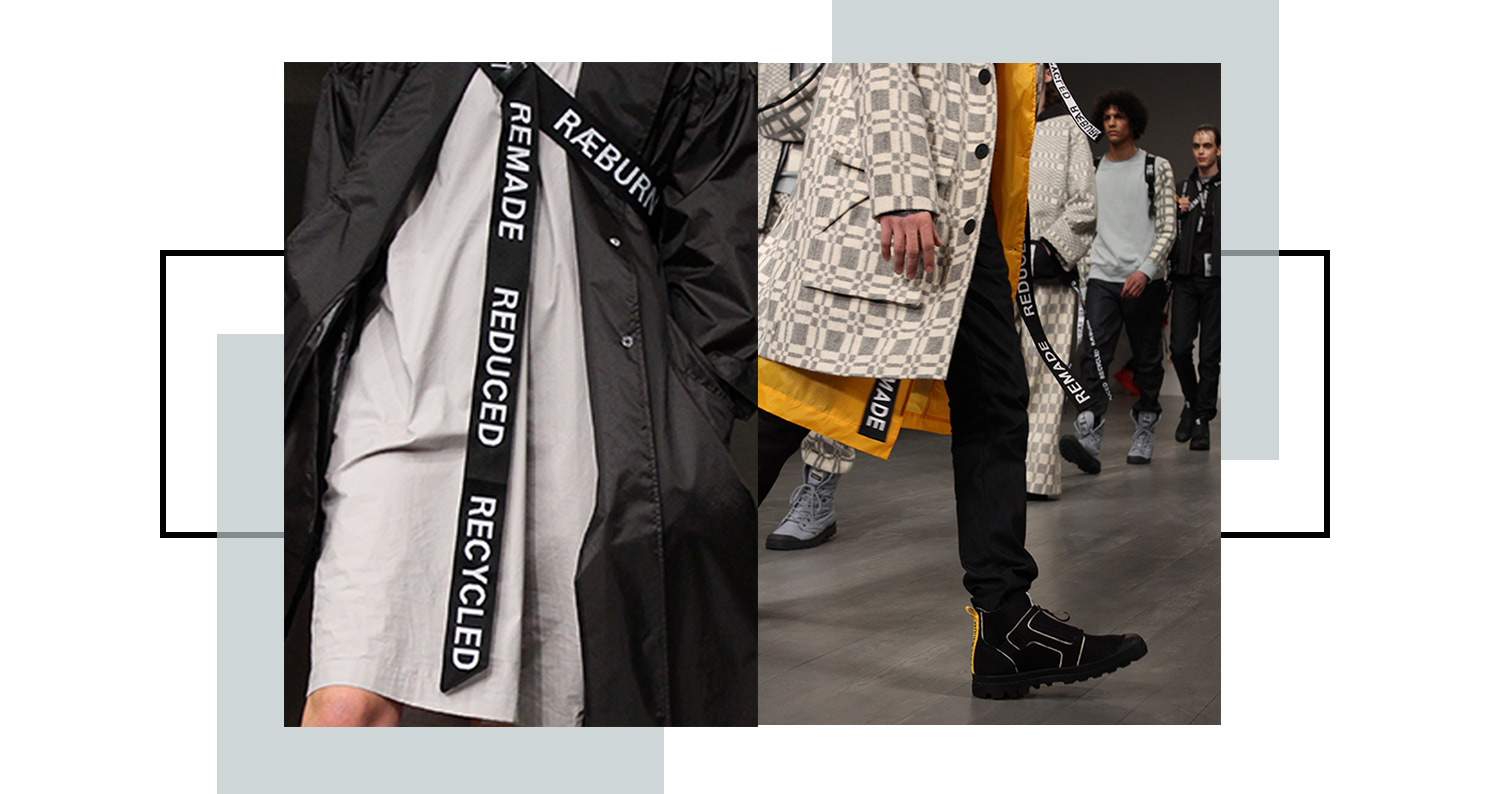 Alex Mullins chose to investigate the relationship between the right and left functions of the human brain for his first runway show in the BFC show space. This was interpreted into a stimulating contest between logical smart clothing and its more imaginative and rule-breaking counterpart. Encompassed with the futuristic ideals of his early 90’s inspirations, the show began in a fairly calm manner with the models in oversized gray suits. Then the collection was followed by bias cut suits, caterpillar puffa-jackets for the toughest conditions, and clever recreations of the traditional trench-coat. Reaching out through the middle, psychedelic swirls of technicoloured tie-died roll necks paired with tailored pieces spiced up the show. 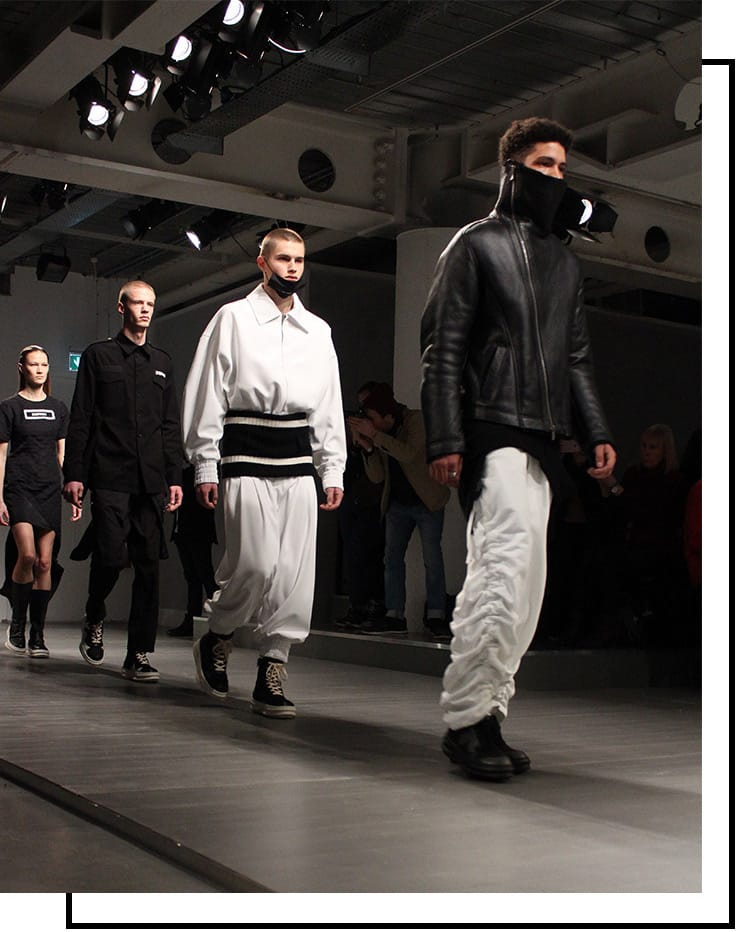 He opted for a simplistic colour palette of only black and white creating a different layers of shades to match with ‘popular avant-garde’ (designer’s preferred term) tailoring.
A skull motif embroidered jacket, flowy suit, high-waisted trousers and a leather jacket were spotted, in which we could see a collision between elevated streetwear and the traditional in a combined silhouette of Korean and Western clothing.
…the past, like a spring dream, leaves no trace- Su Shi, poet of the Song Dynasty, born in 1037
Korean-born designer Kang Dong Jun returned to London Men’s Fashion Week to present his AW18 collection. This time around, a designer used the Chinese old poetry as a starting point for D.Gnak’s collection. A line of ancient Chinese poetry was translated to navigate the true meaning of life, nothing quite apart from money, power and fame which will fade away one day. 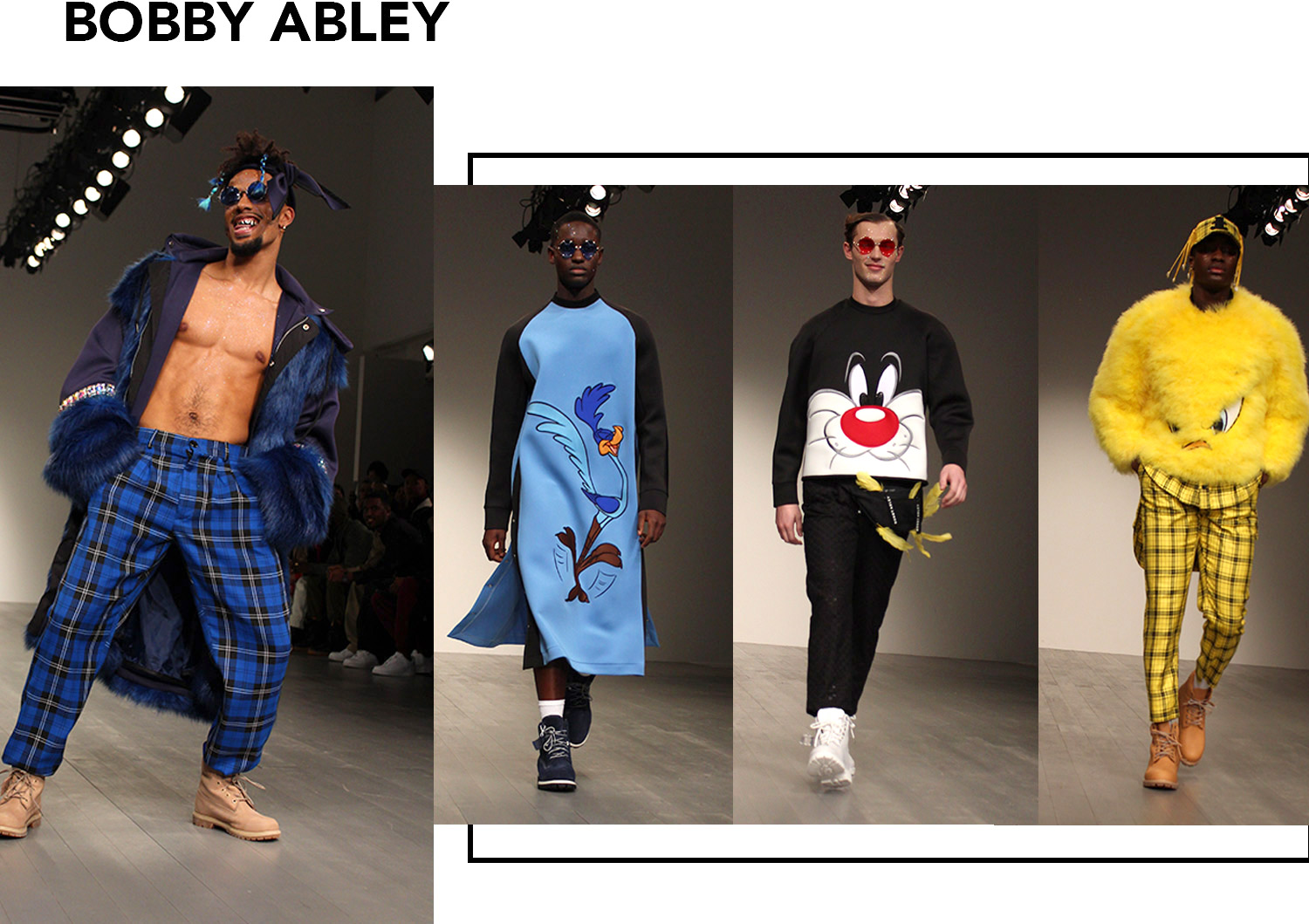 Bobby Abley invited everyone over to ‘Bobbyland’ where everyone is welcome. A welcoming and festive mood was initiated with a model in big blue fur sleeved top, dancing at the end of the catwalk. This season, he teamed with Warner Bros, populating the catwalk with colourful characters of Looney Tunes, Sylvester, and the rest of friends. The designer officially closed the London Fashion Week Menswear joyfully by showcasing the oversized bulky garments and yellow Tweety embroidered feathery top. Each piece was designed for blurring the borderline between gender, rather than being gender-neutral. Although Bobby still played in his familiar playground, nothing felt archaic. His fun, nothing serious-approach is what we need at a time before becoming a ‘Legal Alien’. The technicolour coloured garments with crystal embellishment or lace detail on baggy tracksuits will surely make streetwear-maniacs rush into Urban Outfitters. 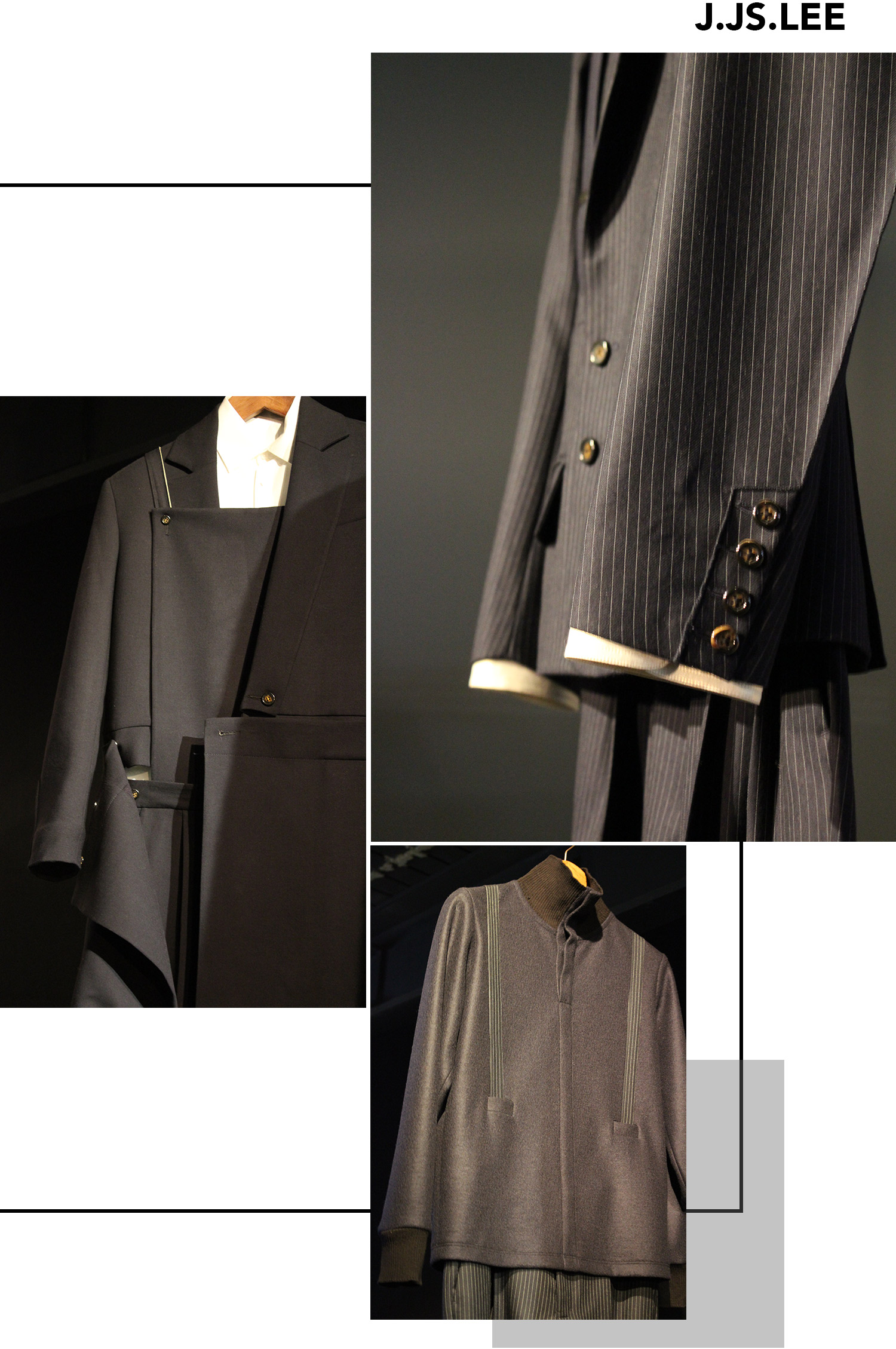 Due to enthusiastic encouragement from J JS Lee’s ardent fans, Jackie Lee finally debuted her menswear range as a presentation during London Fashion Week Men's. For her first men’s installation, Lee particularly paid tribute to British and American men’s tailoring with a little touch of humour. She proved her forte in twisting the dignity of classic men’s tailoring into a younger way. The collection consisted of trousers, tailored jacket, double breasted pin stripe suits, trench coat and some more with the use of high quality grey and navy wool. Especially, subtle but smartly converted suspender details attached on the jacket caught our attention.