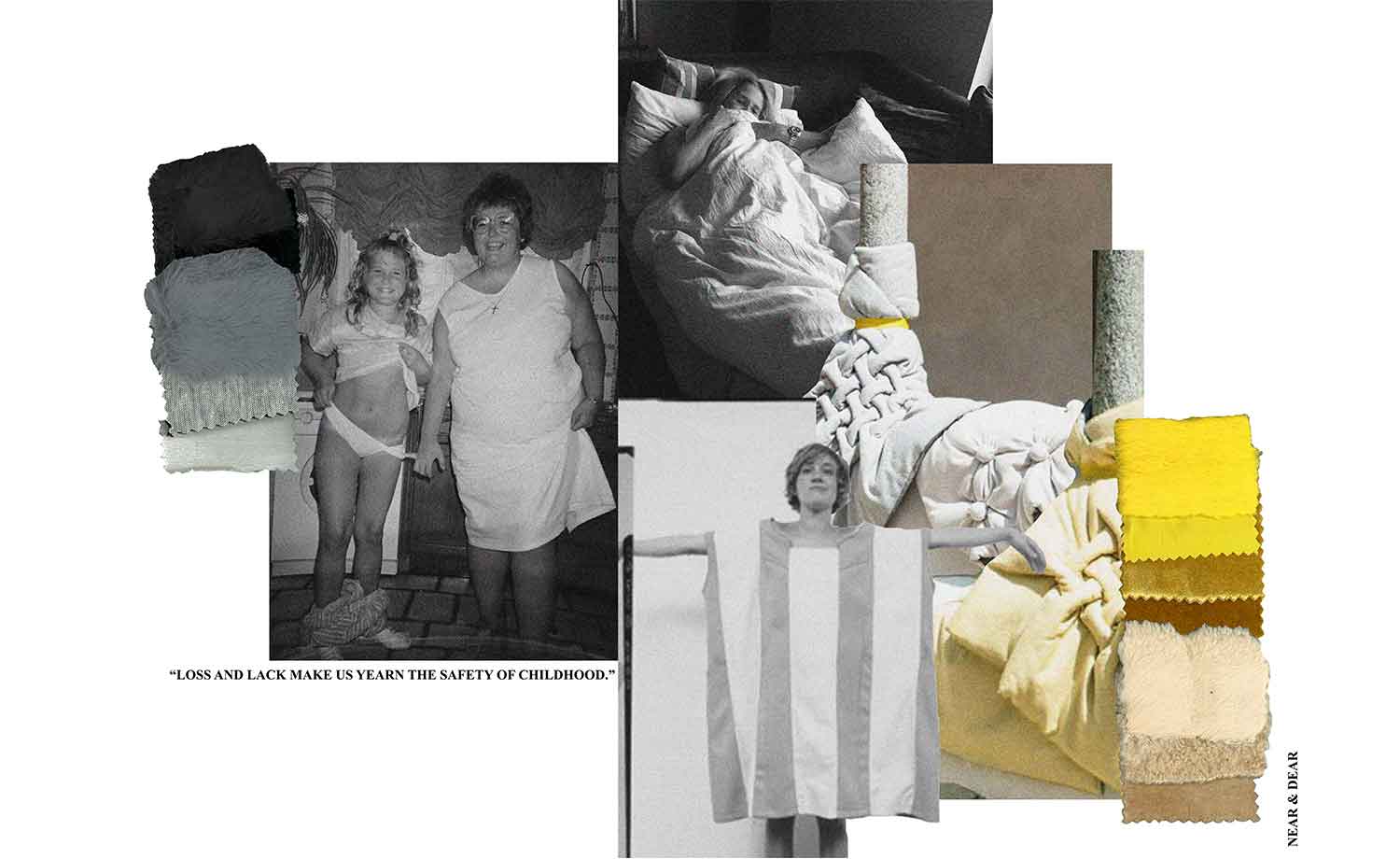 Maisie Dunton's collection was heavily influenced by human relationships and ties. What started as a project inspired by the grief and loss of her mother's sister, evolved into a playful experimentation of how the clothes you wear could re-create that sense of happiness, comfort and security from the relationship you once had. Through looking back at her childhood photographs, she realised much of her own sense of security came from being at home with family, interiors, dressed in her pyjamas, something too big or borrowed or wrapped up in a blanket. 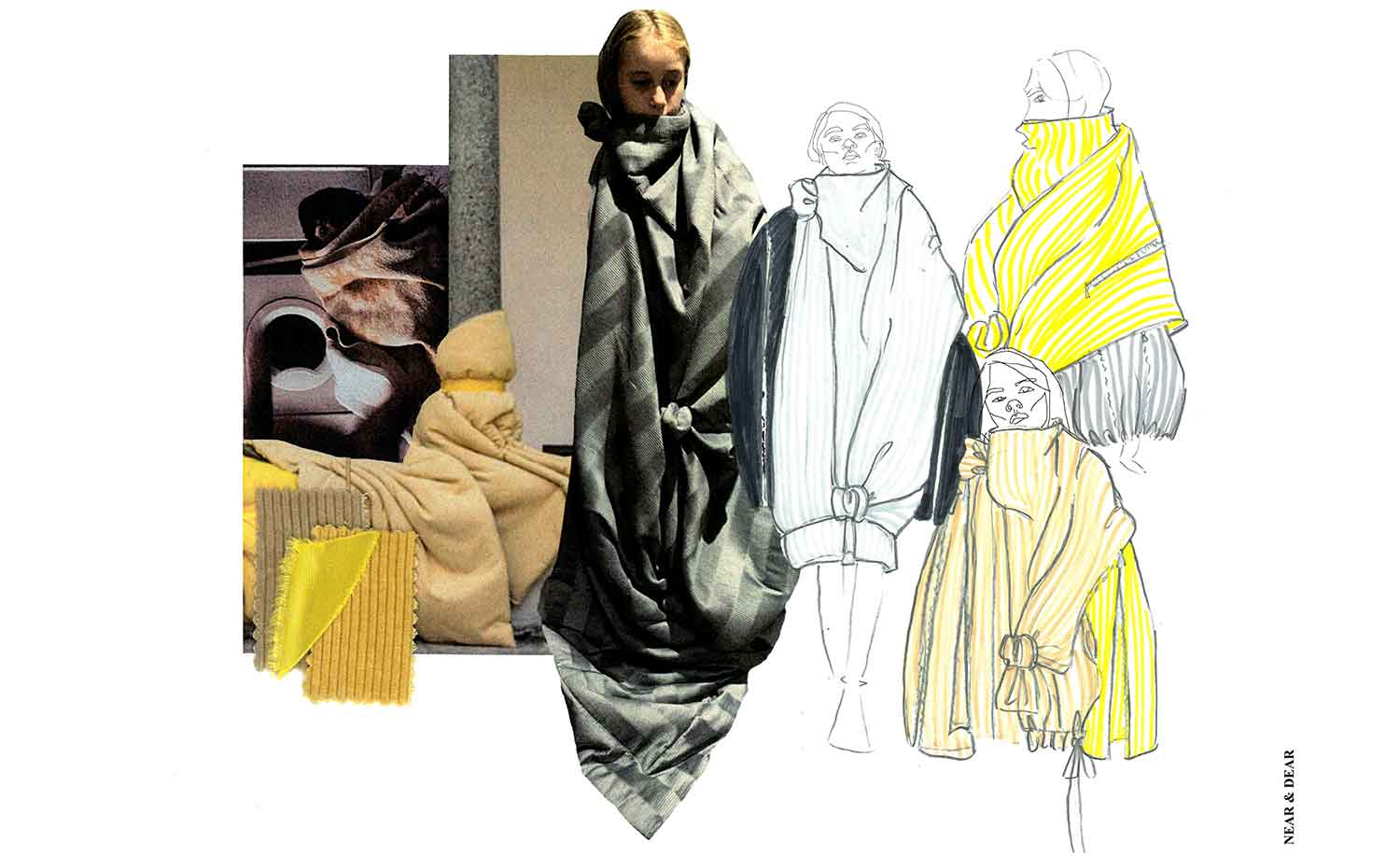 In an effort to embody these memories, she played with duvets, throws, blankets and bed sheets on two sisters, taking one girl out of the draping to see how it would effect the drape and fit on the other girl. The silhouettes created were big, exaggerated, oversized, going back to the idea of the borrowed, the concept that maybe this garment was not meant for this body originally but it works. 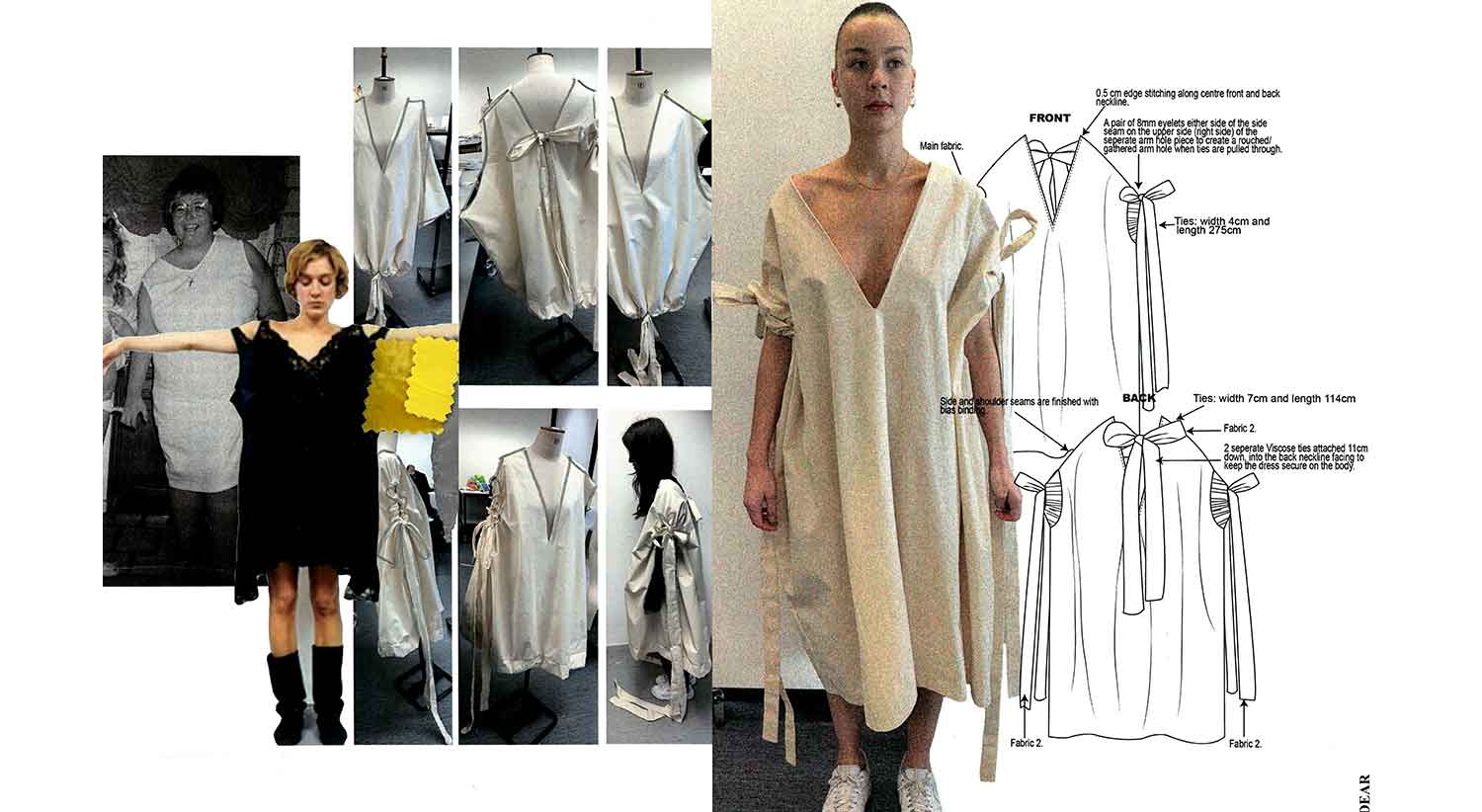 Through using old photographs of her mum and aunt as children, Maisie investigated this idea of borrowing from a brother or sister, choosing oversized menswear blocks to create garments that would reflect this idea but it was also important these garments would fit in the right places for the most comfort. 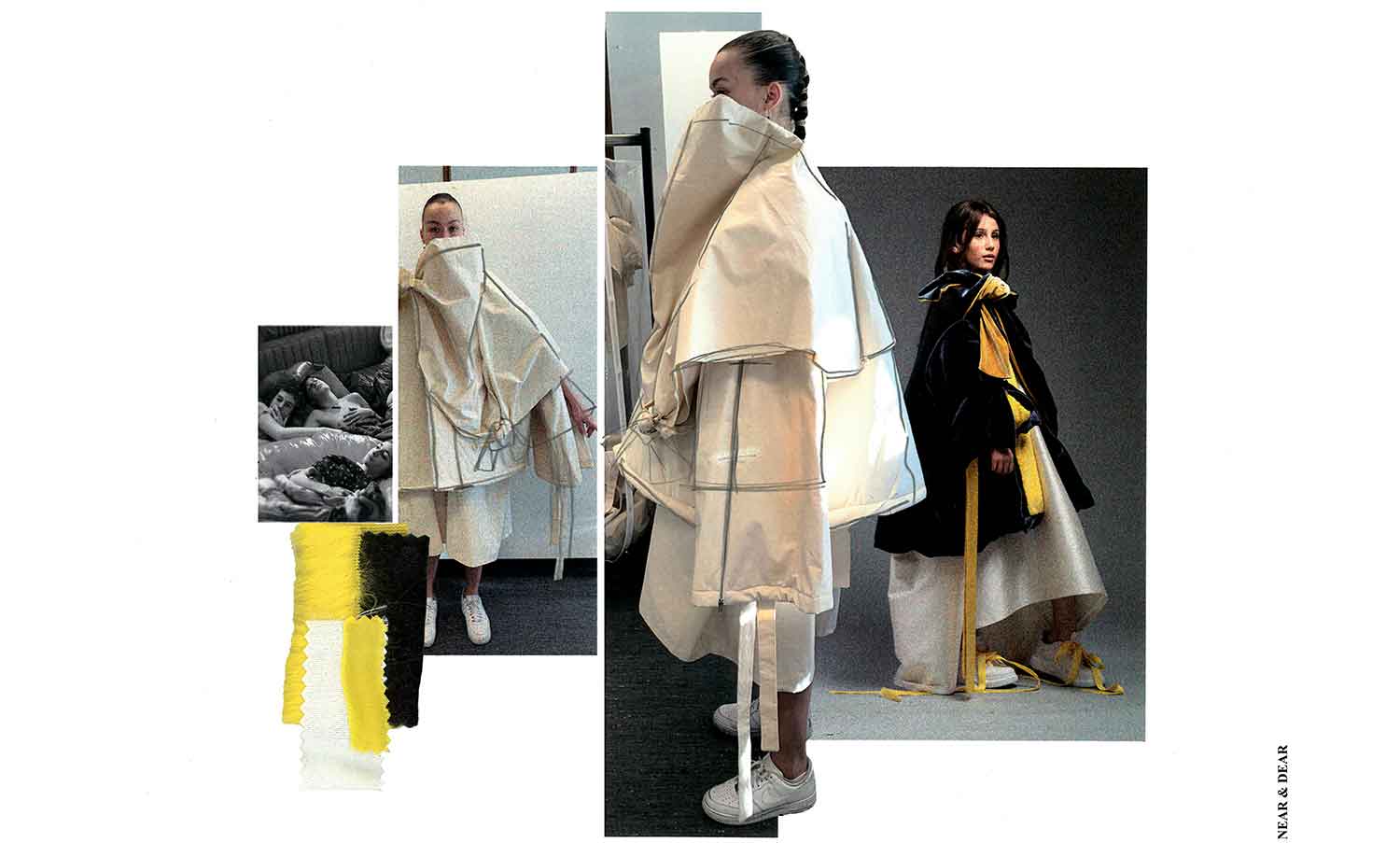 Much of Maisie's work focusses on oversized, simple shapes that are comfortable, almost a duvet in themself as these are aspects she would value in her own clothes, particularly in childhood when she would 'borrow from the boys', her older cousins, dad and grandad. She enjoys exaggerating and seeing how far she can take a simple pattern piece, creating something so big that it cannot be ignored. 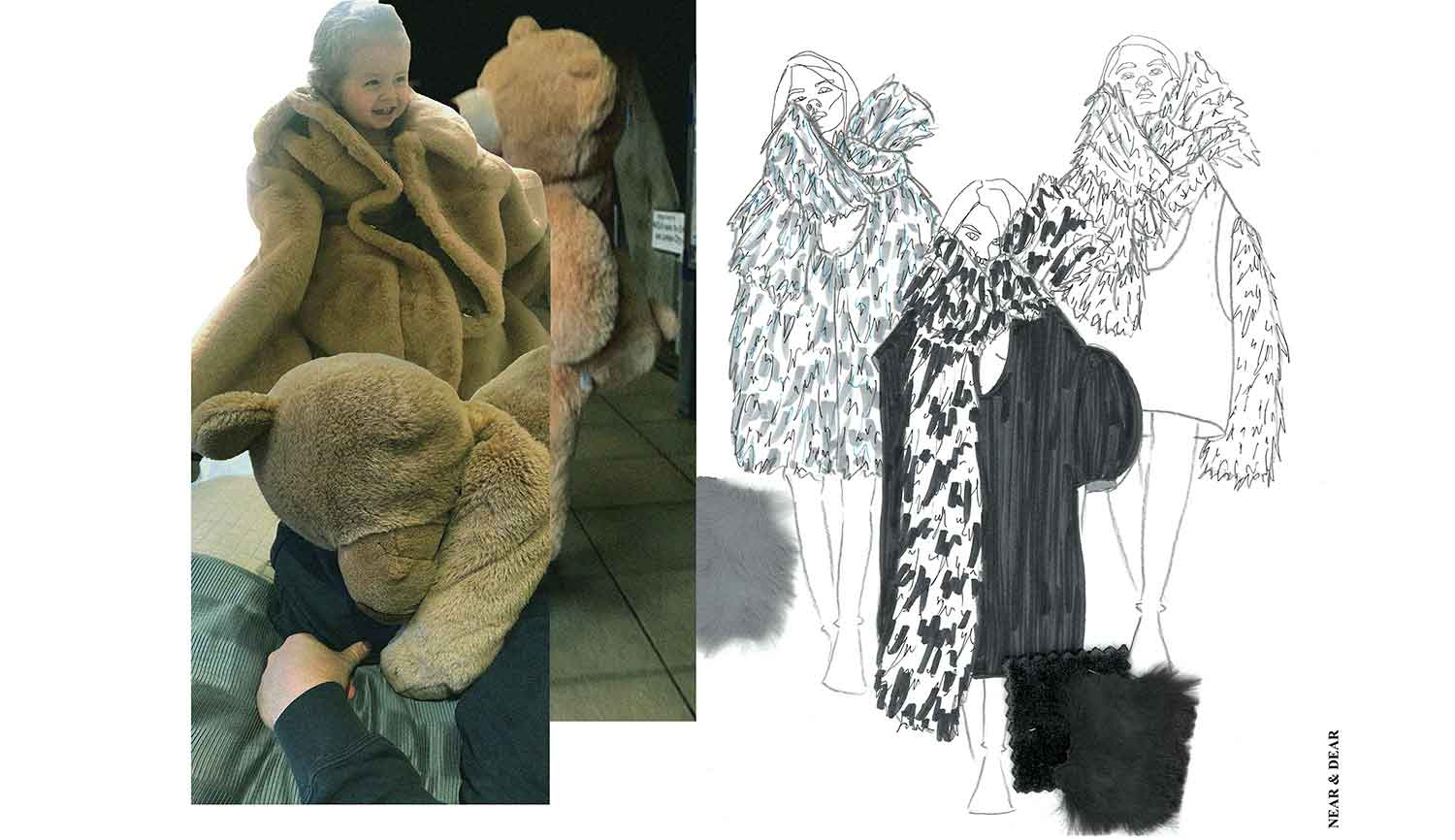 With comfort and security being such an integral part of the collection, Maisie wanted the fabrication to emulate this. The materials were inspired by interiors, silky pyjamas, teddy bears and soft furnish-ings; it was important that her collection felt tactile in that the audience should want to reach out and touch it, almost to cuddle the wearer.

Maisie wanted her fabrication along with the closeness to the body with exaggerated ties at the necks, arms, around the front and sides to conjure emotion, whether it be a playful mood that speaks back to childhood memories, that warm feeling of being safe and cuddled or the idea that by wear-ing something so big and cosy, you could fit two people inside and that way no-one is ever too far away. 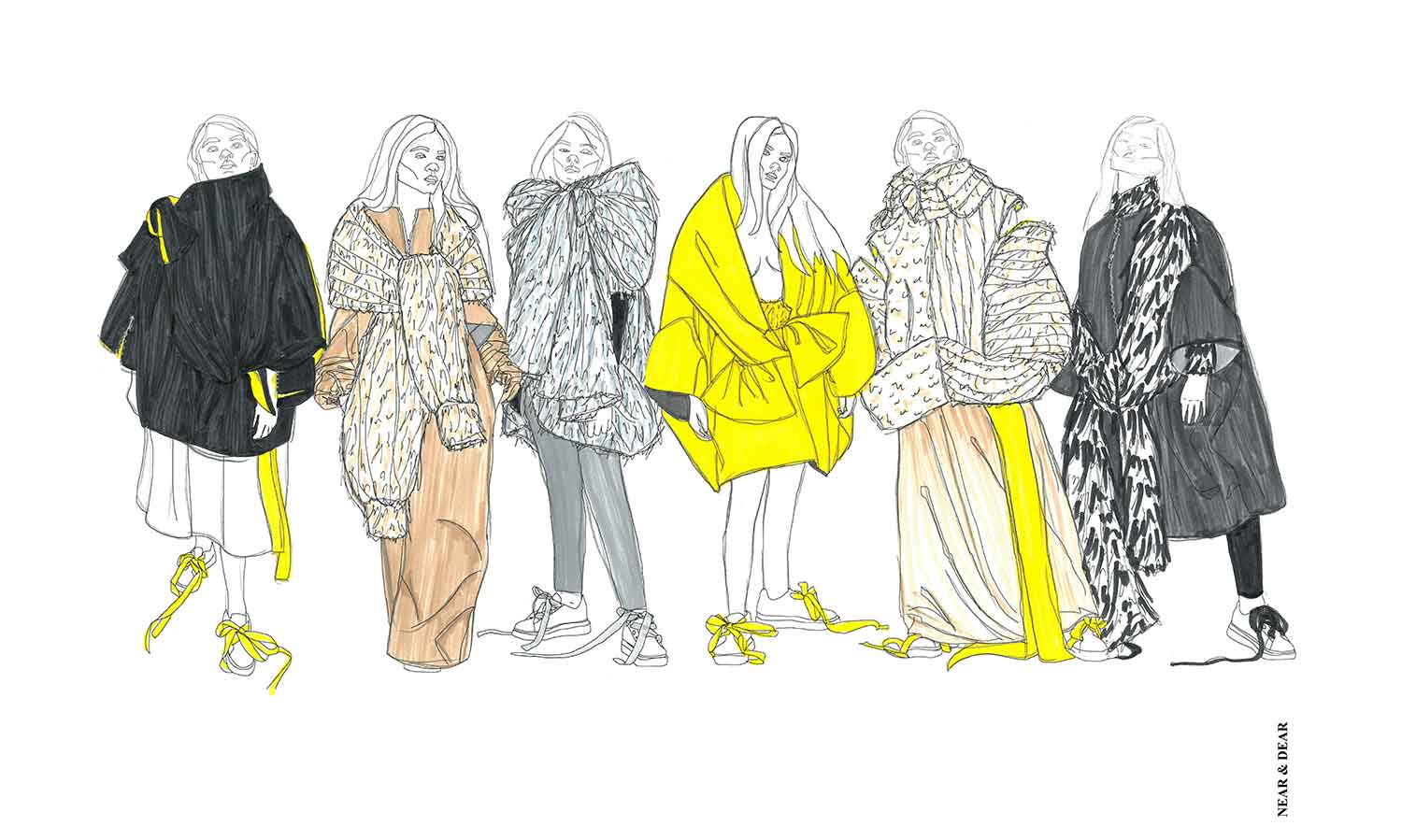