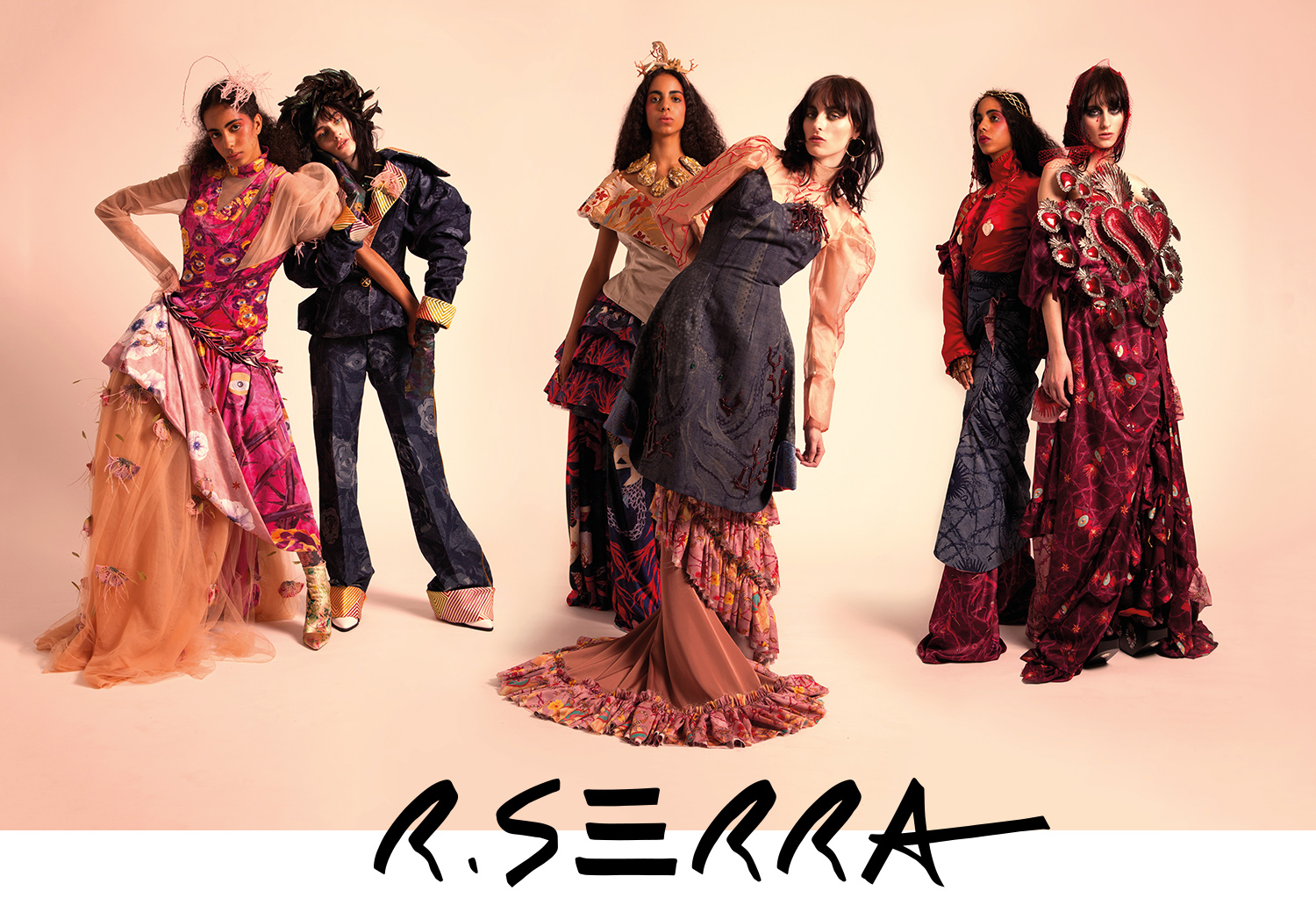 A Rebours (Against Nature), a novel by Joris-Karl Huysmans (1884), forms the basis of the inspiration behind Roman Serra’s London Collage of Fashion womenswear graduate collection. The story follows the life of Jean de-Esseintes, a member of a powerful and once proud noble family, who lived an extremely decadent life in Paris, which left him disgusted with human society. Eccentric, hedonist and idealistic he escapes to the countryside, filling his new home with his eclectic art collection, including an embellished live turtle, artificial indoor gardens, religious symbolism, opulent furniture and extravagant clothing. He finally mutates into a masterpiece within a world of his own creation.

Serra’s interpretation of Against Nature sees a female protagonist, disgusted with modern society, flee to an isolated manor, decorated in a world of her own creation. In the story At Her Majesty’s Pleasure, which accompanies the collection, it maps out a day in her life. From rising from her slumber, tending to her garden and creatures, to an offering to Le Sacre Coeur. The tale sees the conceptual embodiment of her overly stimulated environment become part of her body, dressing it for every occasion of her day. 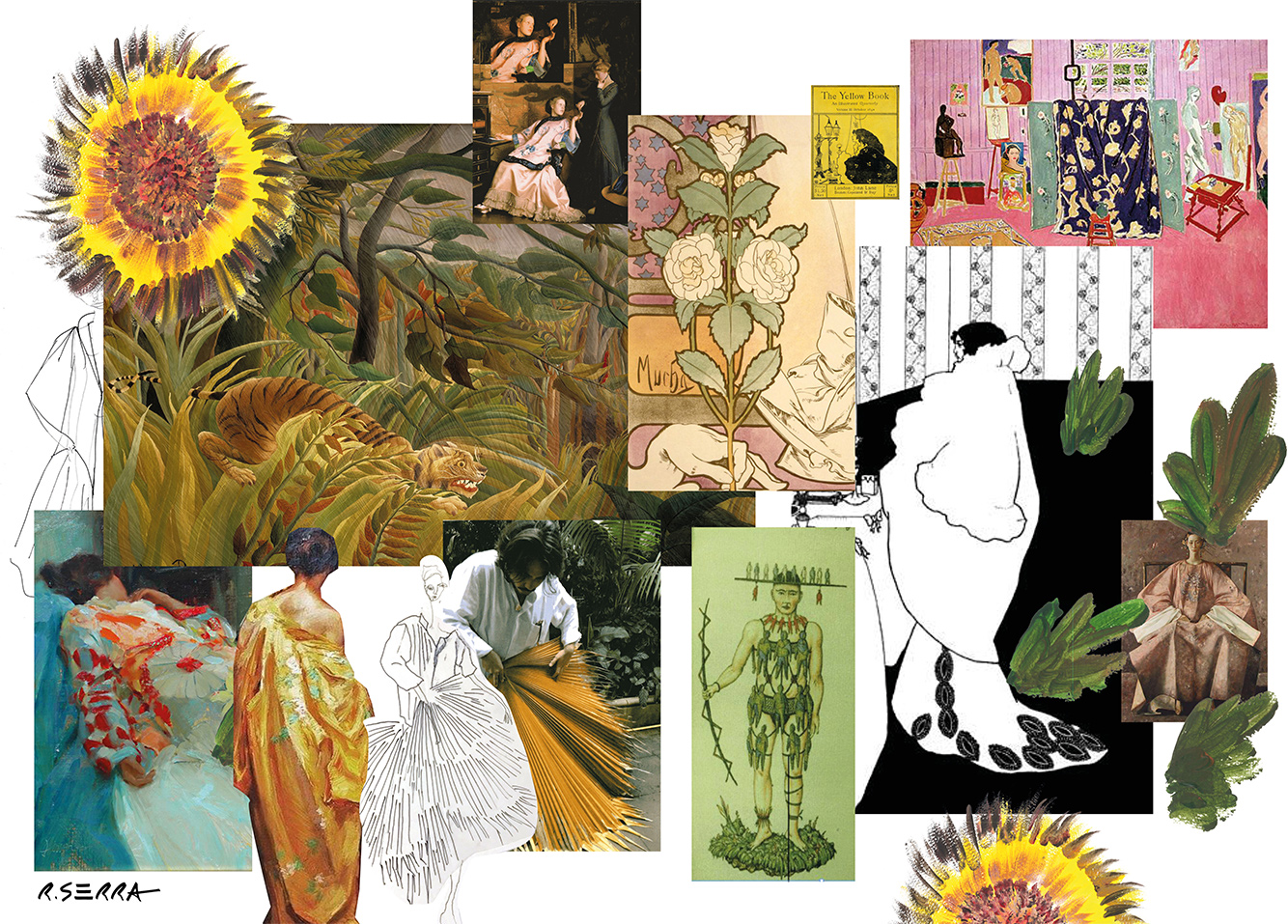 The first look in Serra’s collection, A new dawn, was inspired by the moment his protagonist wakes – how she dresses in that initial stage of her day, rising from the bed in a room that has the essence of a Matisse painting. Beds draped in luscious linens caress her body and her mood is dreamy and ethereal in the prospect of a new day. References were taken from nature, such as how a palm leaf falls against the body or floral patterns are created in gardens. 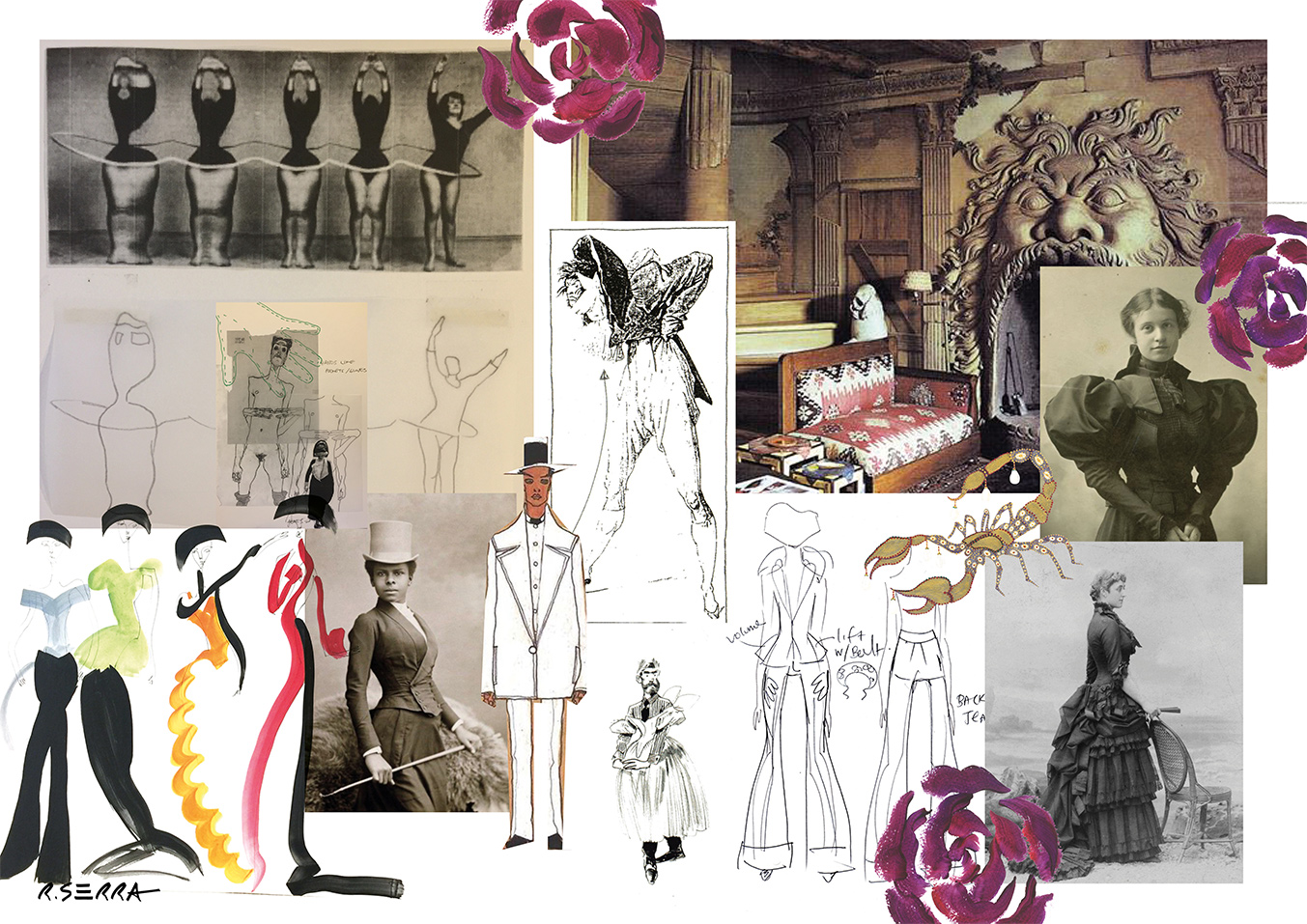 As the morning progresses the protagonist moves out into the garden, where she cares for her beloved garden. Amongst her camellia japonica, she is moved into fashioning them into a suit that she can continue to perform her gardening tasks in – inspiring the hand-painted camellia print for the textile. Design elements of the two-piece suit in look two, Gardening, can be seen to find inspiration from 18th century fashions, such of oversize sleeve details, cinched waists and men’s tailoring. 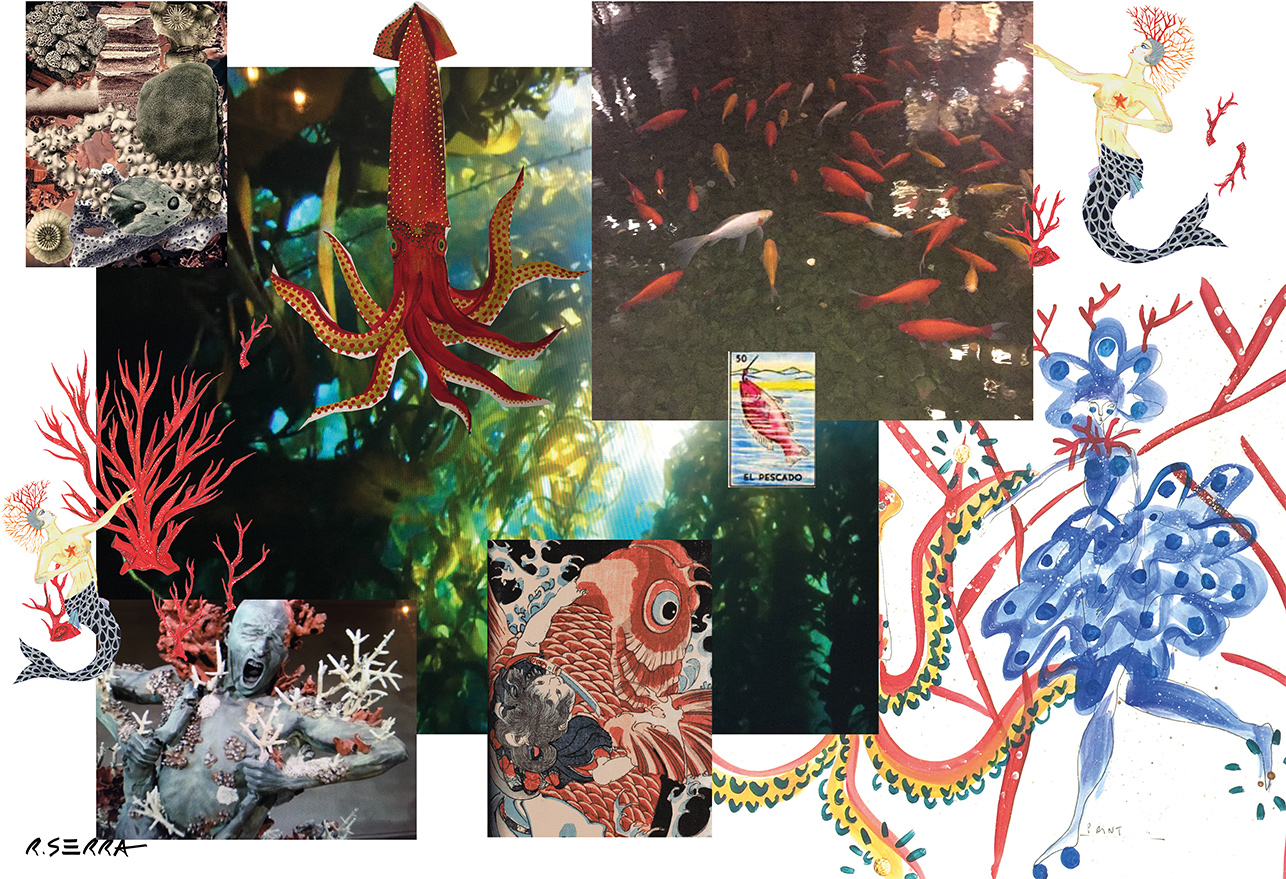 Moving back into the house, the protagonist finds herself drawn to the attic, where there is a large artificial pond. Here lies her octopus, which circles in a large vertical tank that rises from the pond. The octopus, which feeds only on raw diamonds and precious stones, memorises her into diving into the tank with him. Wrapped in a moment of dance, the octopus encases her body. Initial inspiration for look three, Feeding the squid, was taken from the Japanese garden of Holland Park and the underwater sculptures that formed part of Damien Hirst’s Treasures from the Wreck of the Unbelievable. Hirst’s pieces particularly encouraged the introduction of hand-blown glass coral embellishments and embroidery details. 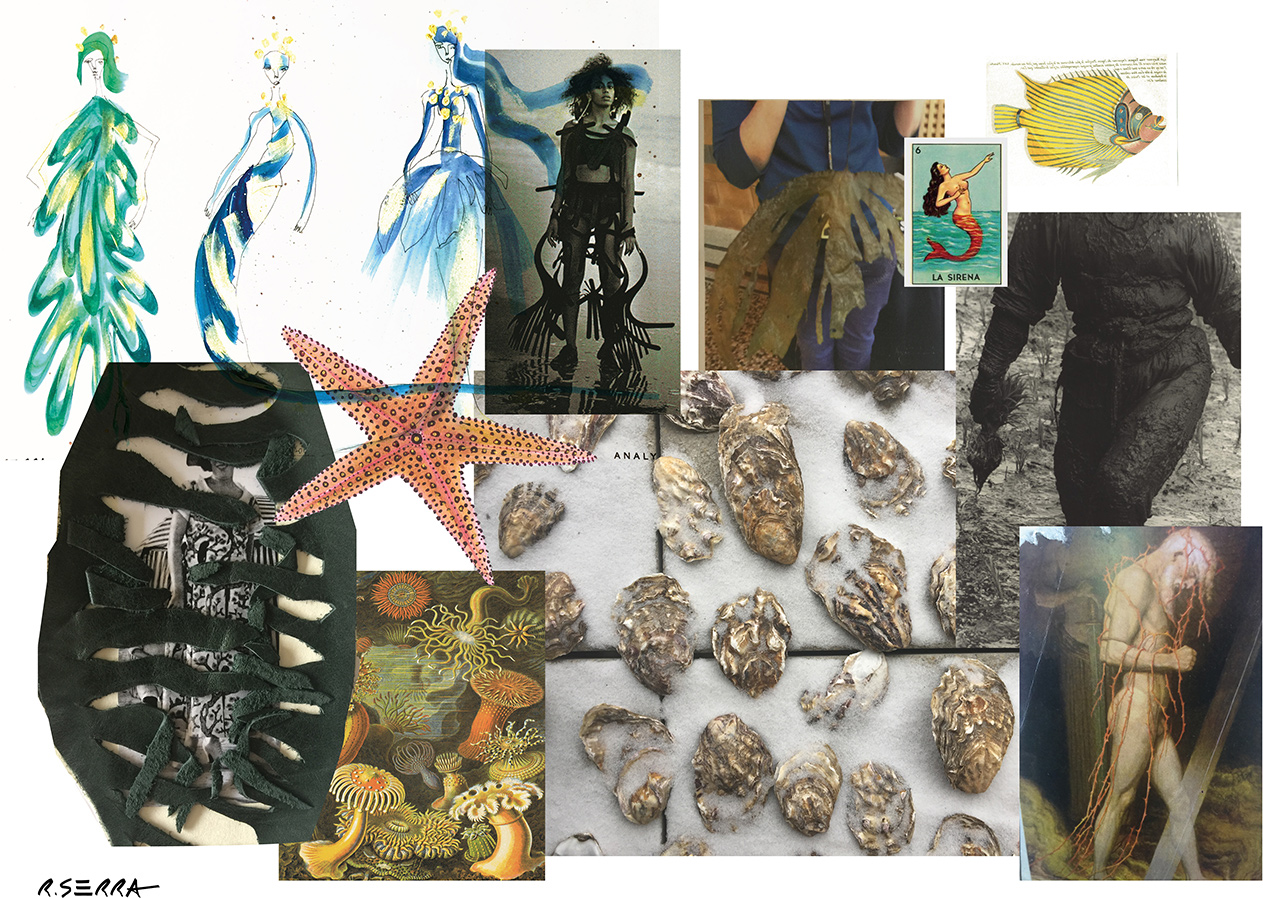 As dusk begins to fall on the skylights that canapé the attic’s roof, the protagonist finds herself taking rest at the side of the pond, her legs dangling into it’s deep waters. The intense twinkling of twilight awakens mermaids from the depths. They begin to sing and dance to her, as if in the tale of Homer’s Odyssey. Look four, Lounging by the artificial pond, is inspired by the bodies of water that engulf the world, from the deep blue and silver hues to the waves of the their surface that are reflected in the drapery of the skirt. Corals, shells, seaweed and other natural forms that live within, all form part of the hand-painted print that it’s made in. 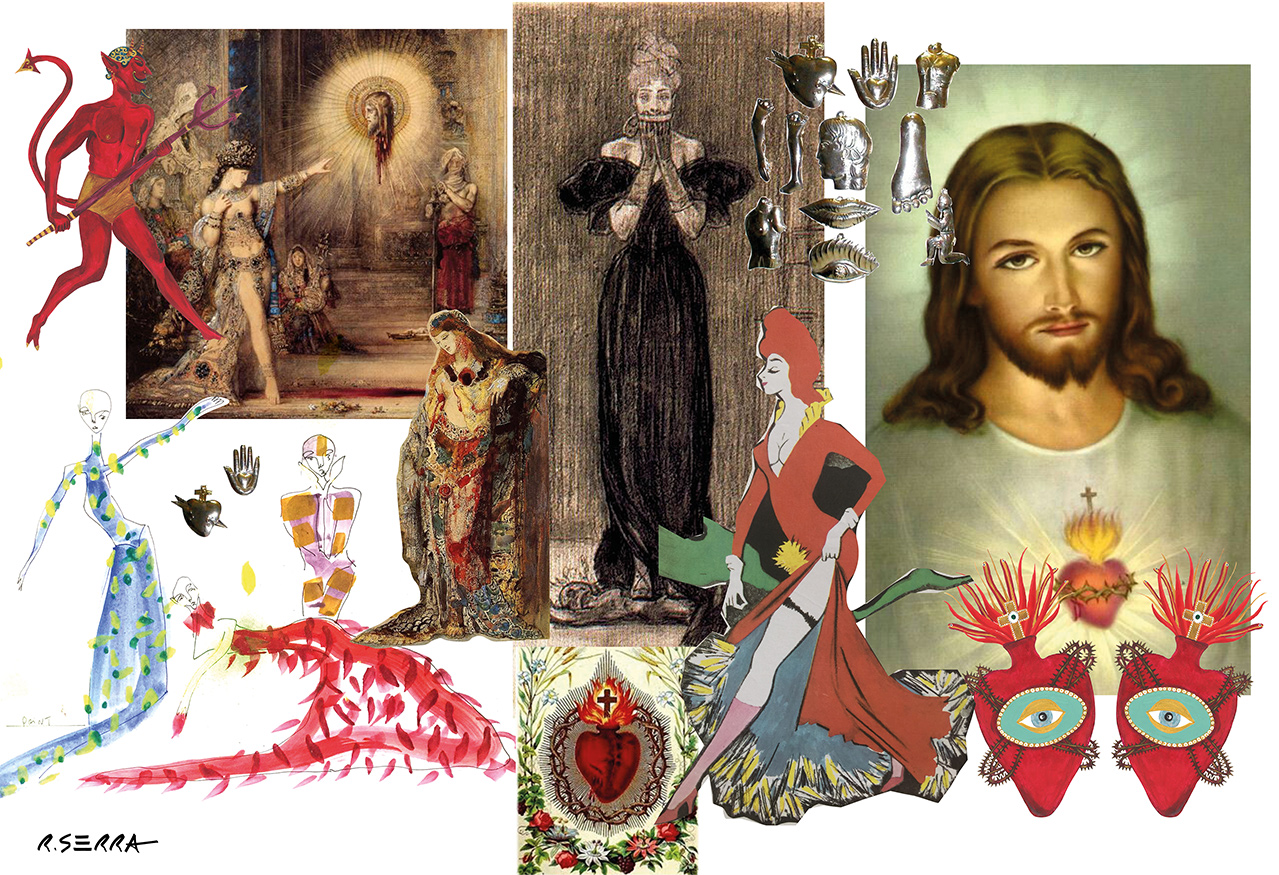 Moving down through the house and deeper into the night, the protagonist finds herself in the grand lounge – a space where she can relax from the labour of her day, and can fix herself a drink. Look four, An absinthe to dance my demons away, finds it’s roots in Gustave Moreau’s Salome and the religious symbolism that is common to Mexican culture, such as prayer miracles, the Fallen Angel and the thorns of Jesus’ crown. 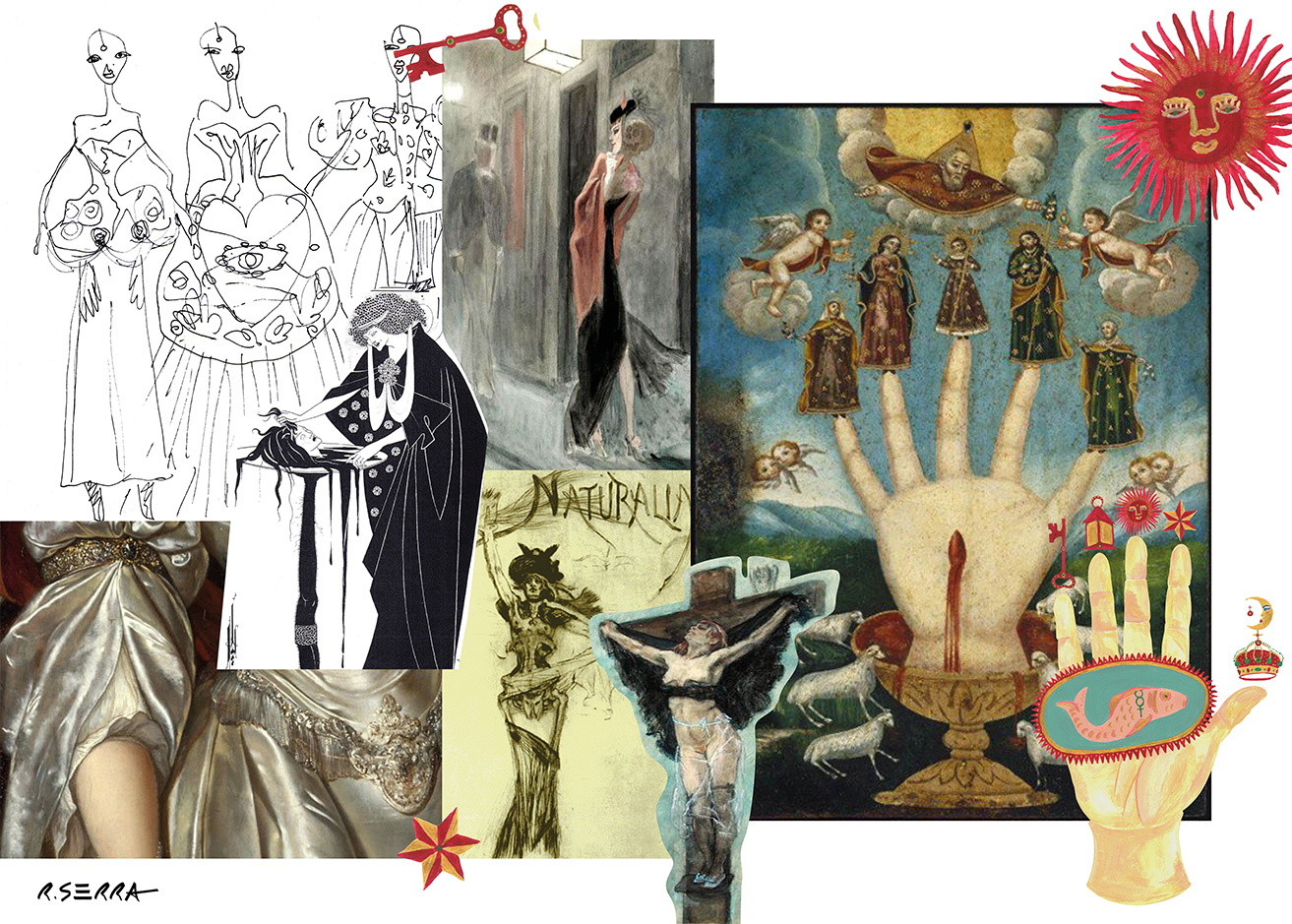 In the final moments of the story, the protagonist hopes to find solace for the sins of her being through the offering of her heart to Le Sacre Coeur. Look six, A night of redemption, takes inspiration from the final moments in one’s life, the beliefs we have in the passing of our soul over to the next life and the religious sacrifice often made, in times past, to free the soul before such departure. Deep red, the colour of life giving blood, is the main colourway. Hand-painted thorns and heart prints are used to create a gown and coat that are inspired in 18th century womenswear.
?
Top