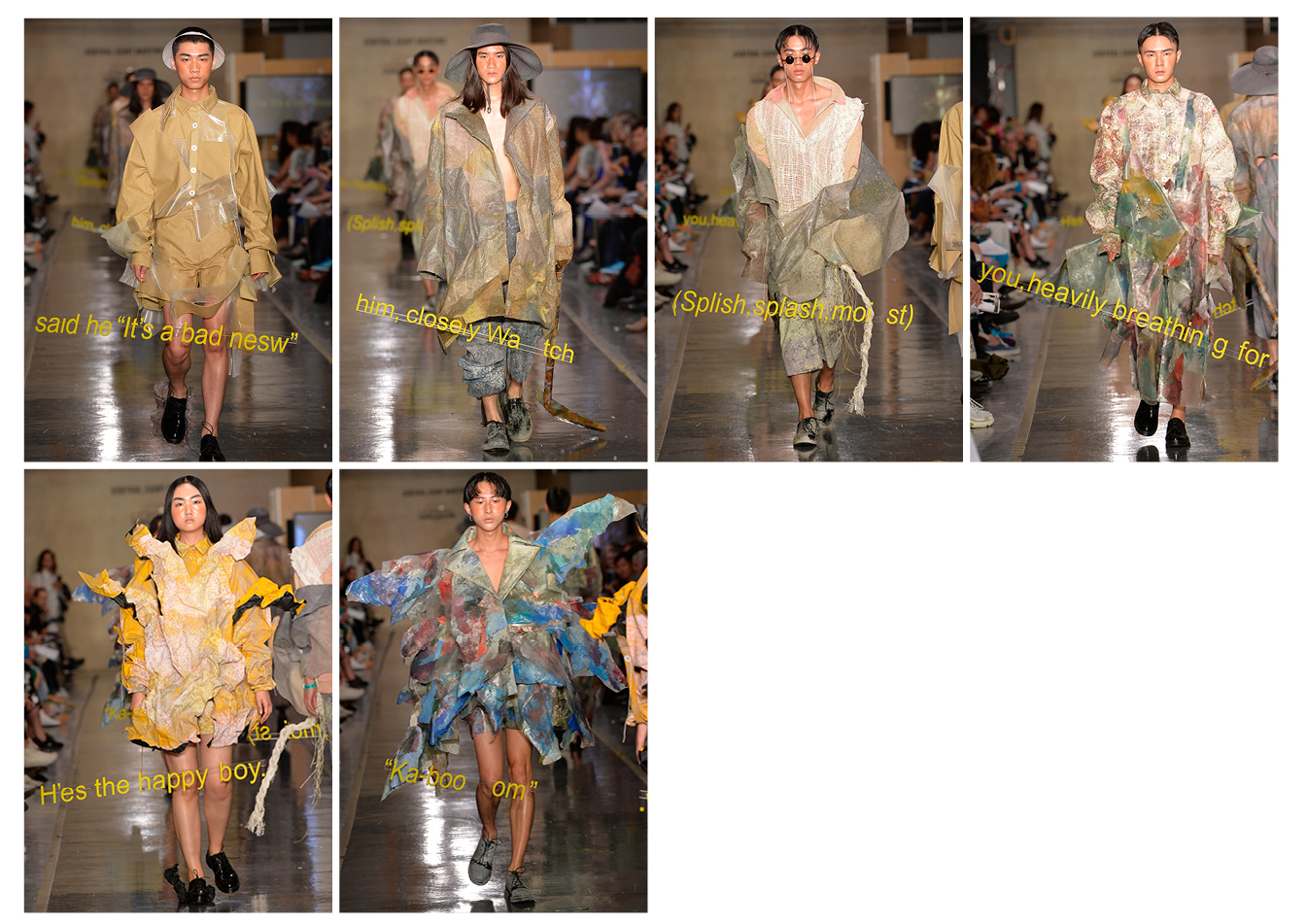 The starting point was me making three films. My idea was to fade them into my collection and then, eventually, into the catwalk show. The first film is called Dear You and I shot it in Japan in collaboration with Taka Hata. It is about really exploring the idea of feeling overwhelmed and about creating a mood. The second film, Paper Boys, was shot in Hong Kong and follows the narrative of the “paper” boy who wants to leave his life behind. It is more like a first hand research film, which I used to develop the content of my collection. The third, and last one, is the actual catwalk show itself. They all work as a sequel to one another. These films became the foundation of my research.
I never really look at secondary research. I mainly created my own research, my own narrative and then translated that into a narrative for my catwalk. In regard to the techniques and materials I used, I really explored grains and creating a grainy surface. I was inspired by the cinematic grainy texture and wanted to create own. Another huge source of inspiration, and reason for working with grainy texture, came from my choice to look at geology. My project is basically a self-portrait of what I am feeling and the experiences I made. I wanted to translate it in a way that would make it visible for my audience. As I was researching for my collection I found this Chinese artist, I can not remember his name right now, but he paints rocks. It is important to know that I am Chinese. In ancient Chinese self-portraiture, unlike the western culture, they do not paint self portraits of their own face, they chose to paint waterfalls, mountains, trees and rocks ‒ basically geology as a representation of themselves. So that is why there is a lot of this granite texture and rock feeling to my garments. As a designer I really like working with material and handcrafting my own. It is one of the most important parts in the design process for me. For that reason I developed two textiles for this collection, the first one being a slime. I spent three months during my placement year exploring and experimenting with slime and figuring out recipes. The idea was to create a slime that, once dried, could become a textile that I could use in my collection. Once I had figured out a recipe I created sheets and sheets of it.
The second fabric/the second technique that I developed involved old oil paint. I did a lot of oil painting for my research to illustrate my concept and to present my ideas on paper. I developed this transfer print technique. Here, I used oil paint to directly paint onto film. Once it is dry, which takes up to a week, I translate the film onto the fabric/the pattern. So it is quite a long process. I do not paint straight onto the fabric, I create a coating on the fabric. I applied this technique also for my slime textiles.